The Event: The discovery of gold at Sutter’s Mill in California and the subsequent influx of immigrants seeking their fortunes

Significance: The California gold rush was a defining moment in the history of westward migration in the United States. It was also an important period in U.S. immigration history. Many immigrant groups, especially the Chinese, began coming to the United States following news of the discovery of gold in California. Initially, the call for citizens was open to all, but as immigrants began coming in larger and larger numbers, laws were established to limit immigration and curtail the rights of those immigrants.

Despite the popular conception of the gold rush as an American event, the demographics of those who participated in it suggest otherwise. John Sutter, who had laid claim to the land on which gold was discovered, was not interested in word of the discovery being made public. He was in the midst of building a lumber mill on the South Fork of the American River on January 24, 1848, when gold was found. He wanted to finish his mill and solidify his claim to the land before hoards of gold seekers began coming to his property to search for gold. However, Mormon settler Sam Brannan made sure that word spread, and he had a good reason to do so. He owned a flour mill in the area as well as a newspaper called the Star, and when gold was discovered at Sutter’s Mill, he opened a store nearby and stocked it with mining implements.

Newspaper articles touting the discovery made this local event into an international incident. “The Discovery of Inexhaustible Gold Mines in California” read one headline, closely followed by these tantalizing details, clearly intended for an international audience: “Tremendous Excitement Among the Americans: The Extensive Preparations to Migrate to the Gold Region.” With such news, the flood of immigrants was inevitable.

The numbers tell the story. Fully one-third of the “forty-niners” were immigrants. Furthermore, the two-thirds who were native-born made up a diverse group: Among their numbers were Native Americans, freed blacks, and even African American slaves. The immigrant groups were equally diverse, coming from Mexico, China, France, Germany, Russia, Ireland, Italy, the West Indies, and even as far away as Australia. The gold rush attracted 30,000 immigrants from France alone. In 1852 alone, twenty thousand Chinese came to California seeking gold; as many as 2,000 Chinese arrived in San Francisco in a single day. Nevertheless, despite all the diversity in ethnicity and nationality, there was little diversity in gender: Nine out of ten of the forty-niners were men.

The gold rush is an early example of a number of attempts to sell theWest to any and all that might come and settle and thus populate and tame the wilderness. Like so many other attempts to draw people westward, the reality never lived up to the hype. This became painfully true for Chinese immigrants. 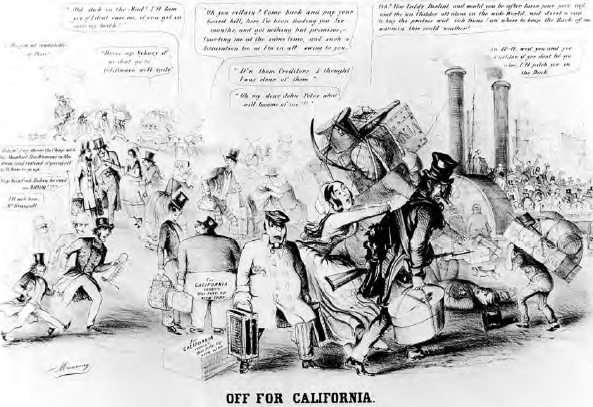 Contemporary editorial cartoon lampooning the motives of the many immigrants flocking to California to join in the goldrush. (Library of Congress)

The citizens in southeast China were particularly vulnerable to the lure of easy gold. After China’s defeat in the first Opium War with Great Britain (1839-1842), the country was open to foreign trade and foreign domination. The results were devastating to local economies. The Pearl River Delta in the Guangdong Province was particularly hard hit with high rates of unemployment brought on in part by competition from imported goods. In addition, there were peasant riots and interethnic feuding. Because of the coastal location of the province and the frequent presence of foreign traders, citizens quickly learned of the gold strike in California. In fact, the Chinese began calling California “Gold Mountain,” and Chinese men made their way to San Francisco hoping to find enough gold to solve their family’s woes.

As in all gold rushes, the so-called placer phase was short-lived: The gold that was found in abundance near the surface was taken early on, and that which was left was embedded in rock and was very difficult for individual miners to extract. Ultimately, individual miners would be replaced by mining companies. Most of the Chinese who came to America were disciplined, dedicated workers with a strong entrepreneurial spirit. Therefore, they not only worked hard in the gold fields for themselves but also proved to be indefatigable in working for others. This very quality, however, made them a threat to “American” workers, particularly as miners discovered that very few of the people who rushed to California were getting rich.

By 1852, the California state legislature had enacted a foreign miners’ tax, something directed primarily toward the large numbers of Chinese and Mexicans who were mining in California. Furthermore, plans that Chinese immigrants had made to bring their families to California for a new life fell victim to increasingly strict anti-Chinese immigration laws. The ultimate expression of anti-immigrant and anti-Chinese hysteria found expression in the Chinese Exclusion Act of 1882, which suspended Chinese immigration for ten years.

Ultimately, those men who had traveled from China to California to find an escape from poverty for their families wound up alone in California. Few records remain of these lonely men, only scattered songs such as the following:

In the second reign year of Haamfung [1852], a trip to Gold Mountain was made.

With a pillow on my shoulder, I began my perilous journey.

Sailing a boat with bamboo poles across the seas,

Leaving behind wife and sisters in search of money,

No longer lingering with the women in the bedroom,

No longer paying respect to my parents at home.

The Chinese were not the only immigrant group that suffered persecution in the gold fields of California. All immigrants were targeted by legislation that made their lives much more difficult than those of Americans. They were also targeted by physical violence. For example, a group of French miners who raised a French flag over their claim were forced to abandon their mine. Mexican miners took to the hills and came back to the gold fields merely to raid the mines. The most famous of these was the legendary Hispanic outlaw Joaquín Murieta. His exploits were so notorious that the governor of California offered a reward of one thousand dollars for his head.WhenMurieta was finally captured and killed in 1853, his head was put in a jug of alcohol and taken from mining camp to mining camp, supposedly as an example. Legends of Murieta abound, growing out of the 1854 book The Life and Adventures of Joaquin Murieta, written by John Rollins Ridge. Some portrayed him as a Robin Hood figure, out to help those who were persecuted, and others as a ruthless thug. Some historians question whether he actually existed. He could well have been a composite figure, representing all Hispanic mine raiders.