The first major influx of Cambodian immigrants who began arriving in the United States during the late 1970’s was part of a large group of refugees from Southeast Asia fleeing political instability in their homelands. The most unstable Southeast Asian nation may have been Cambodia. In 1975, the Khmer Rouge came to power in that country and implemented an extreme version of agricultural-based communism. The new government may have killed as many as two million Cambodians in its attempt to reshape society. As a result, thousands of Cambodians fled the country. Vietnam’s invasion of Cambodia in 1979 intensified the exodus.

A Long Journey and Unwelcoming Arrival

Many of the Cambodian refugees initially fled to neighboring Thailand. There, they were put in refugee camps in which they endured poor conditions. Although some Cambodians remained in Thailand, thousands eventually were permitted to come to the United States at the beginning of the 1980’s. This group was part of a second wave of Southeast Asian immigrants to come to the United States, the first of which had been the massive exodus from Vietnam in 1975. Given the significant influx of immigrants from Vietnam during the last half of the 1970’s, the U.S. government was forced to act. In 1975, the federal government passed and signed into law the Indo-China Migration and Refugee Act. The large numbers of refugees coming to the United States from Southeast Asia led the American government to establish a resettlement program, which was created by this piece of legislation.

The U.S. government utilized this resettlement program that was created during the mid-1970’s to assist Vietnamese refugees who arrived in the country. Through this program, voluntary agencies helped find sponsors to help support the new immigrants and help them adjust to American society for a limited time. The Cambodian immigrants who arrived a few years later were put through the same program. Between 1980 and 1984, approximately 75,000 Cambodians arrived in the United States. 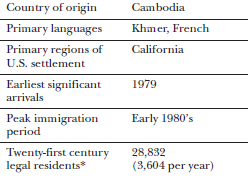 The large numbers of refugees coming from Southeast Asia led to additional legislation by the federal government. Congress passed the Refugee Act of 1980 to limit the number of refugees who could enter the United States on an annual basis. Although elected officials argued that it was necessary to act in order to put the United States in line with international standards for the treatment of refugees, the numerical cap suggested it had more to do with opposition to immigration primarily linked to the economic problems confronting the United States.

Like many other immigrants from Southeast Asia, Cambodian immigrants have tended to work mostly in low-wage jobs, most notably in the seafood processing industry. Many have looked for work similar to what they did in Cambodia, but some who had professional training have been unable to find corresponding employment in the United States. A relatively large number have opened grocery stores. Cambodian Americans have generally had a difficult time economically in the United States. Unemployment among them is high. Many of them have lived in poverty and been dependent on government assistance. Their situation has tended to be worse that of other recently arrived ethnic groups in the United States.