Significance: The United States and Canada are the two main immigrant destinations in North America. Although similarities exist in terms of their reception of immigrants and immigration patterns, there are important differences both in the reasons that immigrants have chosen the United States or Canada and in immigration policies between the two countries.

Although both the United States and Canada had similar British colonial origins, there were differences in the national origins of those who settled each country. In terms of ethnic diversity among immigrants, Canada did not start to catch up to the heterogeneous United States until the latter part of the twentieth century. In the early twenty-first century, both Canada and the United States are important immigrant destinations for many of the same immigrant groups, but immigration policies and immigrant settlement patterns have often diverged during the history of each country.

The English began planting colonies in North America during the early seventeenth century, while the French established a small but influential presence in Canada. Thus, both English and French culture helped shape Canada, a dual heritage that sets Canada apart fromthe United States. Also, the British colonies of the future United States drew more immigrants than the British or French colonies in Canada. Many immigrants heard dismal things about Canada’s climate and the poor prospects for acquiring farmland, so they chose to go south instead, where there was good land and better weather.

The demand for labor was greater in the southern British colonies than in Canada, so more indentured servants went south. Because of difficulties with indentured servants running away, English colonists began transporting slaves from Africa to supplement their labor needs. African slaves and their descendants would become a significant population in the United States, but not so much in Canada. The seventeenth and eighteenth centuries also saw many more Germans, Dutch, and Scotch-Irish settle in the American colonies, especially in cities such as New York and Pennsylvania. These immigrants came for economic opportunities that they perceived were greater in the British colonies south of Canada.

With its defeat in the French and Indian War in 1763, France lost New France to Great Britain. Thirteen years later, Britain lost American colonies in the American RevolutionaryWar but retained its Canadian colonies. One of the first major migrations to Canada came from the United States after the revolution, when Loyalists (Americans who remained loyal to the British monarchy), mainly of British ancestry but including a significant population of African Americans, resettled in Nova Scotia and New Brunswick.

By the beginning of the nineteenth century, both the United States and Canada had fairly open immigration policies, and the native-born populations of the countries were generally accepting of immigrants. As both countries expanded west, Canada continued to attract mainly immigrants from the British Isles. Often, immigrants chose to migrate to Canada because the ship passage from England or Ireland was cheaper than the passage to America. During the nineteenth century, thousands of Highland Scots and Irish came to Canada. The Ulster (Protestant) Irish usually stayed in Canada, whereas many of the Roman Catholic Irish traveled to Canada and then simply crossed into the United States. Irish Catholics may have settled in the United States for political reasons, because the United States was not connected to the British Empire, or for economic reasons, because they believed they could earn more money and find work more easily in America. Many of the Germans and Scandinavians who went to Canada were also trying to make their way to the United States, where economic opportunities seemed greater and where family members or friends were already settled.

In the United States, the century of immigration began around 1820 with increasing numbers of British, Irish, German, and then Scandinavian immigrants entering the country. Many immigrants left their homelands because they wanted a better life in the United States and because certain factors— such as dissatisfaction with government, religious intolerance, poor job opportunities, or famine— pushed them out. Most chose the United States because they believed that they could earn higher wages, find better farmland, and more freely practice their religious or political beliefs there than anywhere else. The United States was rapidly expanding its territory and economy, and the perception that America was a land of freedom and opportunity was already widespread in many European communities. Canada did not have the same political appeal as the republican government of the United States, where numerous immigrants made a successful career in politics.

During the late nineteenth and early twentieth centuries, both the United States and Canada experienced increased diversity in the national origins of their immigrants, and both federal governments began to limit immigration. The first exclusion laws passed in the United States and Canada limited Chinese immigration. Starting in the 1850’s, Chinese laborers began immigrating to the West Coast of the United States and Canada. Because the Chinese were ethnically and culturally distinct from the white population, many Euro- Americans and Euro-Canadians considered them unassimilable. The U.S. Congress passed the Chinese Exclusion Act of 1882, which suspended Chinese immigration for ten years. In a similar action, in 1885 the Canadian government put a heavy head tax on Chinese entering Canada and limited the number of Chinese immigrants that ships could carry to Canada.

During the late nineteenth century, both countries, especially the United States, were receiving thousands of new immigrants from eastern and southern Europe. In the United States, Italians, Greeks, Hungarians, and Jews from Poland and Russia were filling industrial and unskilled jobs in the growing cities of the East and Midwest, while many others, such as Swedes, Norwegians, and Germans, continued to move west, claiming farmland and building small ethnic communities. Many of these immigrants were following chain migration patterns and chose the United States because they already had friends and relatives living in America. Others came because of America’s reputation as a land of liberty. At the same time, the Canadian government encouraged farmers from Great Britain to establish farms in the Canadian west. Canada had little success in attracting the same numbers of immigrants flocking to the United States. Still, thousands of Italian and Slavic contract workers came to Canada to work on railroads and in mines, and although many eventually returned home, some settled in Canada. Some Americans went north to settle farms in western Canada, but even more native-born Canadians left for the United States, especially French Canadians who went to the mill towns of New England.

As a result of this new immigration, nativism grew and efforts to restrict immigration increased in the United States and Canada. In the United States, the Immigration Act of 1891 enabled federal authorities to reject entry to those who were diseased, morally objectionable, or whose fares had been paid by others. Five years later, Canada adopted similar restrictive standards. Immigration restriction legislation in the United States culminated in the Immigration Act of 1924 (Johnson-Reed Act), which limited immigration based on a national origin quota system. Canada continued to pursue its Asian exclusion policies and, in 1930, during the Great Depression, suspended all continental European immigration, allowing only British and Americans with sufficient financial resources to immigrate.

In the second half of the twentieth century, increased numbers of immigrants from developing countries in Asia, Africa, and Latin America came to Canada and the United States. After World War II, the two North American countries received many refugees from wartorn European countries, but the United States admitted far more than Canada, whose citizens were still resistant to large-scale immigration from anywhere but Western Europe. The Canadian Immigration Act of 1952 did little to change Canada’s restrictive immigration policy, but many entered Canada through a program that enabled immigrants whose relatives lived in Canada to sponsor their entry. In the United States, the Immigration and Nationality Act of 1952 (McCarran-Walter Act) liberalized naturalization procedures and included more provisions for bringing family members. In 1965, the United States eliminated the quota system and placed a cap on immigration from the Western and Eastern hemispheres. 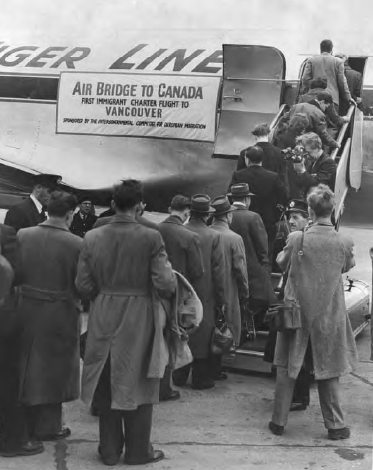 Refugees from Hungary’s failed 1957 revolution boarding a charter plane to Canada, which, like the United States, took in many Hungarian refugees. (Hulton Archive/Getty Images)

As late as the 1960’s, most immigrants to Canada came from Europe, especially Britain. Changes in immigration policy in 1967 introduced a points system to determine immigrant eligibility and removed all race restrictions on immigration. The 1976 Immigration Act, an overhaul of the 1952 law, established four basic categories of individuals eligible to immigrate: family, assisted relatives, refugees, and independent immigrants. Since the 1970’s, Canada has experienced many of the same trends as the United States with regard to immigration, but on a smaller scale. Canada received immigrants from Portugal and Greece as well as from China and British Commonwealth countries such as India, Pakistan, and former British Caribbean colonies.

Many British Commonwealth immigrants chose Canada because it is a fellow Commonwealth country, which facilitates entry into society and government and where established immigrant communities already existed. Haitians and French-speaking immigrants from West Africa came to Quebec because of commonalities in language. In contrast to the United States, Canada has had little immigration from Latin American countries. Because both the United States and Canada have a reputation as wealthy, industrialized countries with free societies, many immigrants in the early twenty-first century choose one country over another based on family and community ties or geographical proximity and ease of entry.