The Events: Official enumerations of the population of the United States undertaken by the federal government every ten years

Significance: Mandated by the U.S. Constitution, the decennial censuses were originally undertaken for the purpose of apportioning congressional seats, electoral votes in presidential elections, and funding of government programs among the states. Over the years, the censuses have collected ever broader and more diverse data on residents of the United States. Data collected by the census are of tremendous value to all studies of U.S. immigration history.

When the Framers of the U.S. Constitution drafted the document that would serve as the foundation of U.S. government and law, they recognized the importance of the government’s having complete and accurate demographic data on which to base the apportionment of elective offices and government funding. Consequently, Article I, section 2 of the Constitution was written explicitly to direct that the population of the United States be enumerated at least once every ten years, so the resulting figures would be used to set the numbers of seats apportioned to each state in the U.S. House of Representatives and, by extension, in the Electoral College.

The Constitution was ratified in 1789. The very next year, 1790, the first U.S. Census was taken. Since that date, a new census has been taken in every year whose number ends in a zero. Between official census counts, the United States Census Bureau analyses the data from the previous census and makes population estimates and projections.

During the first half-century of the U.S. Census, from 1790 to 1840, censuses were taken by marshals of the federal judicial districts. Those years were a period of rapid natural population growth, which was increased by growing immigration from Europe and other continents. Early census takers did not ask the people whom they counted about their countries of birth. That omission limited the value of the data they collected in studies of immigration. However, researchers have nevertheless been able to extract useful information on where immigrants came fromby studying the family names of the people counted in the raw census records. The seventh U.S. Census, which was taken in 1850, began asking questions about residents’ countries of birth.

Terminology used in censuses to classify people by their race, ethnicity, and countries of birth has tended to evolve from census to census. When census takers began asking about countries of birth, they were especially very precise in identifying western European nations and principalities; however, they were less precise in identifying eastern European nations. For example, while they carefully recorded the names of each of the several hundred tiny German principalities from which immigrants came, they ignored the names of some much larger states in the Balkans. The names of the Balkan states of Montenegro and Serbia appeared for the first time in the census of 1910. Immigrants from German-speaking Austria were counted as “Hungarians” until 1870 because Austria was part of the Austro-Hungarian Empire.

Another quirk in mid-nineteenth century census records was the tendency of census takers to assign to immigrants certain nationalities that technically did not then exist. For example, in 1860 they introduced a special “country” of Poland for ethnic Poles, despite the fact that Poland did not then exist as a separate nation. Polish-speaking immigrants fromGermany, Austria, and Russian were all officially recorded as coming from “Poland.” Another special country created by census takers in 1870 was “Bohemia,” which was then part of the Austro-Hungarian Empire. All Czech-speaking immigrants were recorded as having been born in Bohemia.

In order to give census taking a more permanent home, the U.S. Congress passed a law in 1902 that established the U.S. Census Bureau as the government agency responsible for overseeing the census. The new bureau was also charged with gathering other types of demographic and economic data. As a part of the U.S. Department of Commerce, the bureau has ever since that time served as the primary source of authoritative data about almost every aspect of American demography and the national economy. In establishing the bureau, Congress finally recognized the need for centralizing the gathering of statistical data within one agency.

After 1902, the Census Bureau began growing into a substantial-sized government agency with responsibilities much greater than those of the less permanent offices that it succeeded. Before 1902, the only clear function of the census was to collect population data with which to reapportion congressional seats every decade as the relative sizes of state populations changed. 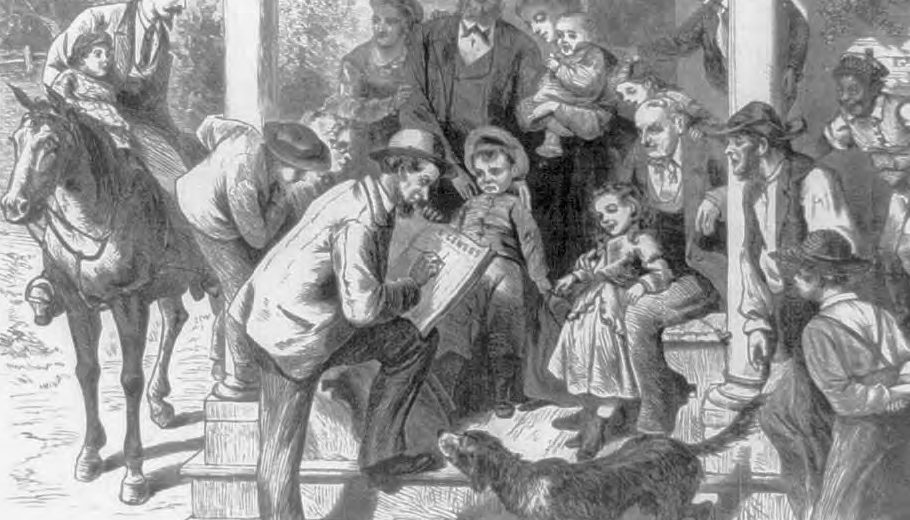 Contemporary drawing of a government census taker in 1870. (Library of Congress)

The first census overseen by the new bureau was that of 1910, which introduced new methods. Under the leadership of Edward Dana Durand, a professional statistician who had become the bureau’s director in 1908, the census added numerous new questions, with particular emphasis on labor and industrial matters. The 1910 census required some fundamental procedural changes.

In order to determine the ethnic composition of the nation’s immigrant population, the new census form included a question about “mother tongues”—the languages spoken in the ancestral homes of immigrants. That question provided information that would not be learned simply by learning immigrants’ countries of birth, as nationality did not always indicate a person’s ethnicity. This was particularly true of Jews and members of other ethnic groups from the great multiethnic eastern and central European empires of Russia and Austria-Hungary. Moreover, many individual Slavic immigrants, such as Czechs, Croats, Slovenes, and Slovaks did not want to be counted as “Austrians” or “Hungarians.” Czechs started the protests, and members of other Slavic groups soon joined in. The 1920 census asked the same question as the 1910 census about the mother tongues of immigrants and their children. However, the census of 1930 asked only about the mother tongues of the immigrants themselves.

At the suggestion of officials of the Bureau of the Census in 1980, Congress replaced the census question about mother tongues with a more openended question about ancestry. The new census form asked all respondents to identify their ethnic ancestry. Respondents were asked to answer the question without regard to how many generations removed they were from their ancestral countries of origin or what ties, if any, they had with their ancestral groups. In 1990, respondents were allowed to identify more than a single ancestral group, which slightly few than one-third of the respondents did.

It is interesting to note that information gathered by the 2000 census reflected recent changes in the political map of Europe, after the breakups of the Soviet Union and Yugoslavia. Many more Americans identified as their ancestry nationalities that had recently reappeared on maps of Europe.