Significance: In the first of the Supreme Court’s Chinese exclusion cases, the Chew Heong decision affirmed that a Chinese citizen had the benefit of rights promised in treaties with China unless the treaties had been clearly and explicitly repealed by Congress.

In an 1884 amendment to the Chinese Exclusion Act of 1882, Congress required Chinese laborers residing in the United States to obtain reentry certificates if they left the country with the intention to return. Chew Heong, who left in 1881, returned not long after the amendment went into effect. Lacking the certificate, he was denied permission to land. In response, he challenged the denial in federal court on the ground that it violated privileges guaranteed under a treaty made between the United States and China in 1880. 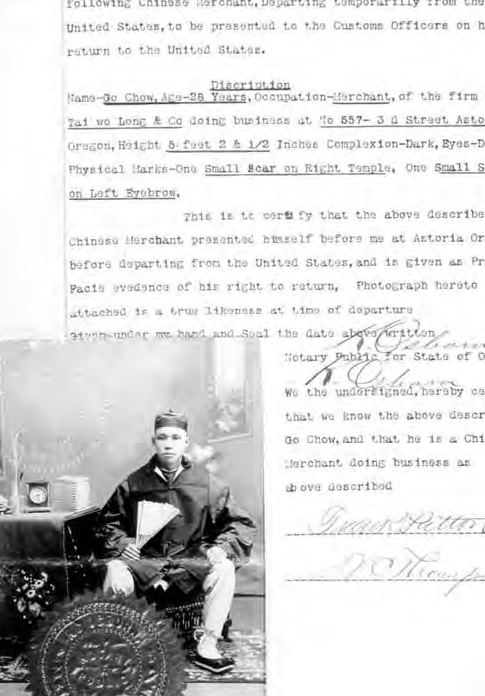 Reentry documents carried by a Chinese immigrant in 1891. (NARA)

The Supreme Court, by a 7-2 vote, ruled in Heong’s favor. Writing for the majority, Justice John Marshall Harlan addressed two major arguments. First, Heong was qualified to obtain a certificate, and he could not be required to do what had been impossible for him to do. Second, the denial of his right to return contradicted a treaty with China. Unless Congress had unambiguously expressed its intent to repeal the relevant part of the treaty, established rules of construction required the Court to attempt to reconcile the treaty with the legislation.