Identification: Largest city and major commercial hub in both Illinois and the Midwest

Significance: From the time of its incorporation during the early nineteenth century, Chicago has attracted many immigrants seeking jobs and business opportunities. With immigrants from Europe, Asia, Latin America, and the Middle East, Chicago has become a center of multiculturalism and enriched the United States with a diverse population.

From the 1840’s through the early twentieth century, oppression, religious persecution, a rapid increase in population, and a scarcity of land and employment and the resulting starvation forced many Europeans to leave their native lands in search of employment and the opportunity to improve their lives. Chicago, with its big steel mills, stockyards, and meatpacking plants, attracted a vast number of these immigrants.

During the late nineteenth century, immigrants from Ireland, Germany, Italy, and eastern European countries—especially Poland and Lithuania— made their way to Chicago. Roman Catholicism and Judaism were the predominant faiths of these immigrants, many of whom were fleeing harassment as well as severe hardships in earning a living. The vast majority of these immigrants were poor individuals lacking specific skills. The Irish immigrants, for example, had almost exclusively been tenant farmers. The continental European immigrants were mostly of peasant ancestry and came from small farms. In 1916, with the increase in the number of workers required to meet the needs of the war effort, a considerable number of Mexicans, displaced by the Mexican Revolution, also immigrated to Chicago.

Unskilled and for the most part non-English speaking, Chicago’s diverse immigrants took lowpaying and often dangerous jobs requiring manual labor in the stockyards, meatpacking plants, and steel mills. They settled in areas close to their work and attempted to recreate the social and cultural life they had known in their homelands. Irish immigrants tended to settle in Bridgeport on the South Side and in Kilglubbin to the north and east of the stockyards in Canaryville.

Lithuanians also settled in areas of Bridgeport, while the Polish lived in Back of the Yards. The Italians created “Little Italies” and the Germans established their own communities. In the meatpacking plants, certain immigrant groups tended to concentrate in specific jobs. For example, the Irish worked primarily in livestock handling. Germans, Poles, and Lithuanians worked mainly on the killing floors, and Mexicans worked in the freezers and hide cellars. Similar ethnic patterns could also be found in the steel mills.

The flood of immigrants entering Chicago continued into the first decade of the twentieth century. In addition to the large group of Mexicans who fled the revolution in their home country, large numbers of Lithuanian farmers displaced by industrialization and the advent of commercial farming and Russian Jews fleeing religious persecution settled in Chicago. As concern over the size of the nation’s growing immigrant population became greater, the U.S. government enacted a number of laws to restrict the inflow. As in other parts of the country, Chicago then experienced a significantly slower pace of new immigration.

After World War II ended in 1945, the number of immigrants coming to Chicago increased again. With the Soviet Union occupying Eastern European countries, Chicago experienced a resurgence of immigrants from these countries, especially Lithuania. Liberalization of federal immigration laws in 1965 brought large numbers of immigrants from Asian countries, including South Korea, the Philippines, China, and India as well as from many Latin American countries. By the 1990’s, threefourths of Chicago’s population growth was attributable to immigration. During the 1990’s, the number of Chicago residents who had been born in India doubled. The areas in which the immigrants settled during the late twentieth century also changed. Most early immigrants settled in the city proper, but after 2000, immigrants began settling in the suburbs. 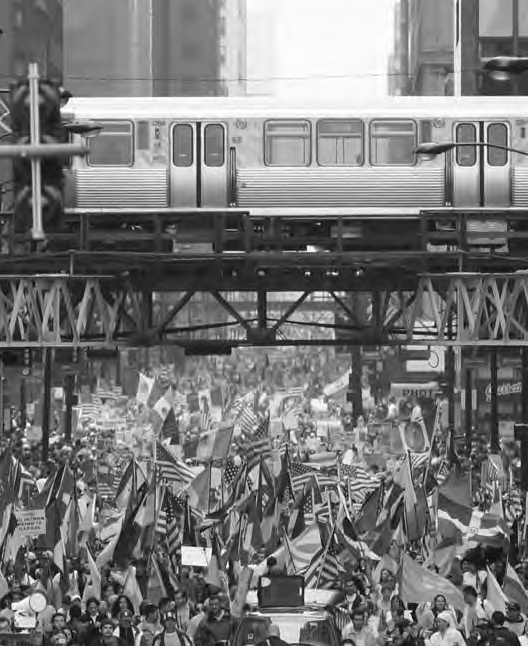 An elevated train passes over a Chicago street crowded with demonstrators marching in support of immigrant rights on May 1, 2006, during a nationwide day of immigrant action. (AP/Wide World Photos)

The composition of Chicago’s immigrant population changed significantly between the midnineteenth century and the early twenty-first century. Irish, German, Italian and Polish immigrants constituted the most numerous foreign-born segments of Chicago’s population during the nineteenth and early twentieth centuries. The 2000 U.S. Census found that Mexicans, Poles, and Indians constituted the city’s three largest foreign-born groups. Mexicans alone accounted for 40 percent of the foreign-born population. During the 1990’s, the numbers of immigrants from sub-Saharan Africa began increasing significantly. The numbers from Nigeria and Ghana alone tripled during the 1990’s. However, despite these changes, the presence of Irish, Italians, Poles, Germans, and other early immigrant groups remains visible in the many festivals, ethnic celebrations and cultural attractions that enrich the city.