Definition: Immigrants who have not yet reached the legal age of majority—usually people under eighteen years of age

Significance: The estimated five million child immigrants residing in the United States during the first decade of the twenty-first century have presented unique anomalies for those charged with enforcing immigration laws. Children often become the innocent victims of such laws, especially those who belong to families of undocumented aliens. Although these children frequently have lived much of their lives within the United States, they are often deported as illegals and returned to countries whose languages they do not speak and whose customs they do not know.

The United States is a society built by immigrants who flowed into the country in vast numbers during the nineteenth and twentieth centuries. Whether these newcomers were fast or slow to adapt to their new surroundings, they all produced children who, as second-generation immigrants, quickly learned the language and customs of their new surroundings. Their assimilation was accelerated by intermarriage. Assimilation was generally smoother for immigrants from most of Europe, as they bore a general similarity of appearance to the majority population of native-born Americans of European descent. Slower to be assimilated were those who, because of their skin pigmentation and other features, looked different from most of the European immigrants. Asians often created their own ethnic enclaves, and such enclaves as Chinatowns continued to thrive as many as three or four generations after their founders arrived in the United States.

In many of America’s large cities, tight-knit ethnic communities were formed by those of similar backgrounds. However, by the second or third generations, the structures of most such communities tended to weaken as their younger members became upwardly mobile and entered professions outside their communities, rather than remaining in the ranks of unskilled laborers that they had formerly occupied.

The most crucial step toward assimilation is learning the language of one’s adopted country. In many immigrant families, particularly those from eastern European nations, immigrant parents insisted that only English be spoken in their homes. Consequently, their children tended to gain English fluency quickly.

Many eastern European immigrants arrived at seaports on the East Coast of the United States and settled in such coastal cities as Boston, New York, Philadelphia, and Baltimore. In cities that provided free or inexpensive educations—in some cases, as in New York City, through higher education—the children of immigrants hastened to take full advantage of the educational opportunities available to them. Their assimilation was assured.

Child immigrants can be classified within a number of categories, ranging from infants adopted from foreign countries by American citizens to the children of aliens, documented and undocumented, who may be seeking citizenship independently or as members of families. Although most legislation on immigration professes respect for family unification, significant problems arise for the children of undocumented aliens.

Under U.S. law, all children born within the United States or in its territories are automatically U.S. citizens. Their birth certificates are proof of their citizenship, even if they are born while their parents are in the United States illegally. If that is the case, their parents remain viewed as undocumented aliens and are, if apprehended, subject to deportation. The citizenship of children thus has little bearing on the parents’ status as illegals.

Child immigrants can be classified variously. American citizens often look to foreign countries when they wish to adopt children. In the past, such children, who were usually babes in arms at the time of their adoption, did not automatically become U.S. citizens. However, if their adoptions were approved by the appropriate federal government authorities, the adopting parents, on proving their willingness and ability to assume the full responsibilities of parenthood, routinely obtained citizenship for the children they adopted or were about to adopt. 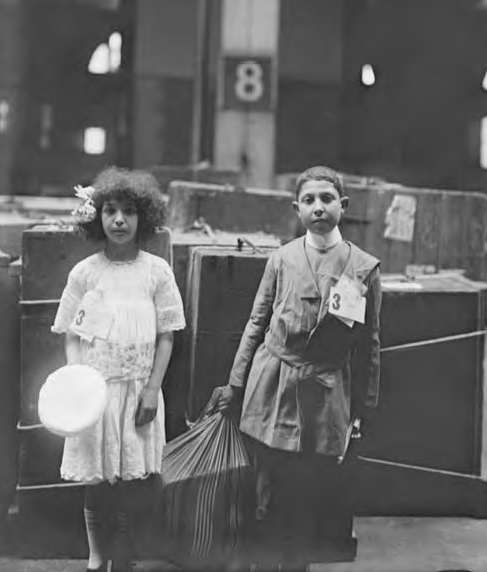 Young immigrants at Ellis Island during the early twentieth century. The tags they wear identify the ship on which they arrived. (Library of Congress)

The Child Citizenship Act of 2000 streamlined the process though which adopted children from other countries gain American citizenship. In the past, children who were approved for adoption and removal from their native countries were routinely granted citizenship after entering the United States. Under the provisions of the 2000 law, however, U.S. citizenship is now granted immediately upon the approval of an adoption in the child’s native country so that the adopted infant can enter the United States fully documented and with citizenship status.

U.S. citizens who adopt older children holding foreign citizenship can usually obtain U.S. citizenship for these children if they are under eighteen years of age. However, they must present convincing evidence that they are not adopting merely so the children can obtain citizenship. Such practices have been dubbed “adoptions of convenience,” which are similar to “marriages of convenience”—those entered into for the sole purpose of obtaining citizenship. The adoptive parents must usually verify that they have supported their adopted children for substantial periods, usually two years, prior to filing their applications for citizenship.

Naturalization of Stepchildren and Orphans

Stepchildren constitute another category pertaining to child immigration. When American citizens marry spouses whose children are not citizens, they can apply to have their new stepchildren declared U.S. citizens. Stepparents do not necessarily have to adopt their stepchildren to make them eligible for citizenship, but they must demonstrate that they have contributed significantly to the children’s support and upbringing for a minimum period of time if the children are declared to have nonorphan status.

When children have orphan status, the requirement for nonorphans is not enforced. An orphan is defined as a child whose natural parents have died, disappeared, or abandoned the child. Such children are eligible for permanent resident status if they are being adopted by U.S. citizens. A child who has lost one parent may be designated an orphan if the surviving parent has not remarried and is incapable of supporting the child in question. The surviving parents must surrender their parental rights in order for their children to be declared orphans.

Adopting single parents must be twenty-five years of age or older to qualify as petitioners for adoption. However, married people need not meet this age requirement. Adopting parents need only meet the adoption adoptive parent requirements of the states in which they file their petitions to adopt.

In October, 2000, President Bill Clinton signed the Intercountry Adoption Act, which adhered to the Hague Convention on International Adoption. This bill was intended to simplify the process for adopting children from foreign countries. Although the new law was a significant step forward, it did not take effect immediately. The federal government first had to establish a Central Adoption Authority, the details of which had to be established and agreed to by all of the participating parties.

In a continuing effort to streamline the adoption of children fromforeign countries in 2009, the Families for Orphans Coalition (FACE) supported a bill in both the U.S. Senate and the House of Representatives for legislation to be called the Foreign Adopted Children Equality Act. The bill was sponsored by John Boozman and Diane Wilson in the Senate and by Mary Landrieu and James Inhofe in the House. Under the provisions of this act, citizenship would be granted immediately to all foreign children being adopted by U.S. citizens so they would enter the United States as full-fledged citizens, rather than as petitioners for citizenship. This act would eliminate the need for adopted children in this category to obtain immigration visas in order to enter the United States. Rather, they are declared “citizens from birth.” Whereas children who enter the United States on immigration visas, albeit legally, might at some future date be denied scholarships, passports, or entry into the U.S. armed forces, the new status would bestow upon foreign adoptees all the rights and privileges of anyone born in the United States.

All persons applying for U.S. citizenship, except for very young children, must undergo interviews conducted by the Immigration and Naturalization Service. At these interviews, applicants are fingerprinted and given two tests, one to demonstrate their ability to speak English and the other to demonstrate their knowledge of basic American government and history. Older applicants are occasionally granted exemptions from the language test. Those who pass the tests are immediately informed that they have passed. Those who do not pass one or both tests may apply to retake the tests at a later date.

Children born in foreign countries to U.S. citizens receive American citizenship immediately if both their parents are already citizens. In cases in which only one parent is a citizen, the children must live in the United States for at least five years—two of which must be after the child reaches the age of fourteen. In the latter situation, full citizenship must be applied for, but granting it is routine.