Definition: Ethnic enclaves of cities within which Chinese residents are concentrated

Significance: American Chinatowns are viewed by some as ethnic ghettos and places of exploitation by an internal Chinese American business elite and by society as a whole. Others see them as a source of economic opportunity and an aid in adjusting to a new environment for newly arrived Chinese. In either case, Chinatowns have been the points of entry into America for most Chinese immigrants, and they are an important part of American culture and history.

Thanks to Spain’s presence in the Americas and its trade with China, ethnic Chinese have been in America since the sixteenth century. It was not until the mid-nineteenth century, however, that significant numbers began to seek their fortune in GamSaan, or “Gold Mountain,” as some called California. It was during this time that the Qing Dynasty was collapsing in China, accompanied by wars and revolutions. In addition, the population of China was exploding. Guangdong and Fujian provinces’ population doubled during the nineteenth century, displacing thousands of farmers and merchants, and more than half the Chinese immigrants at that time came from this area. In 1848, gold was discovered in California, and construction of the transcontinental railroad was begun in 1863.

The lure of fortunes in the gold fields and steady work on the railroad brought immigrants by the thousands, who, in order to protect themselves from the mistreatment and discrimination of the greater society, congregated together and insulated themselves. In addition to this self-segregation, laws were passed that prohibited Chinese from buying land or living outside certain areas. These factors combined to create America’s Chinatowns, which have served as an American repository of the languages, customs, and culture of one of humankind’s oldest civilizations.

The majority of the early Chinese immigrants were either bachelors or men whose families remained in China. These early Chinatowns were seen as bachelor outposts where opium dens and prostitution were common. In most cases, these immigrants did not come to America seeking the celebrated American Dream but were instead sojourners who hoped to one day return to China with a fortune. Any who may have wanted to pursue the American Dream were faced with the Naturalization Law of 1790, which stated that only “free white persons” could become citizens. These Chinese sojourners usually sent a large part of their earnings to their families in China, and a large number of them wound up penniless and exhausted. 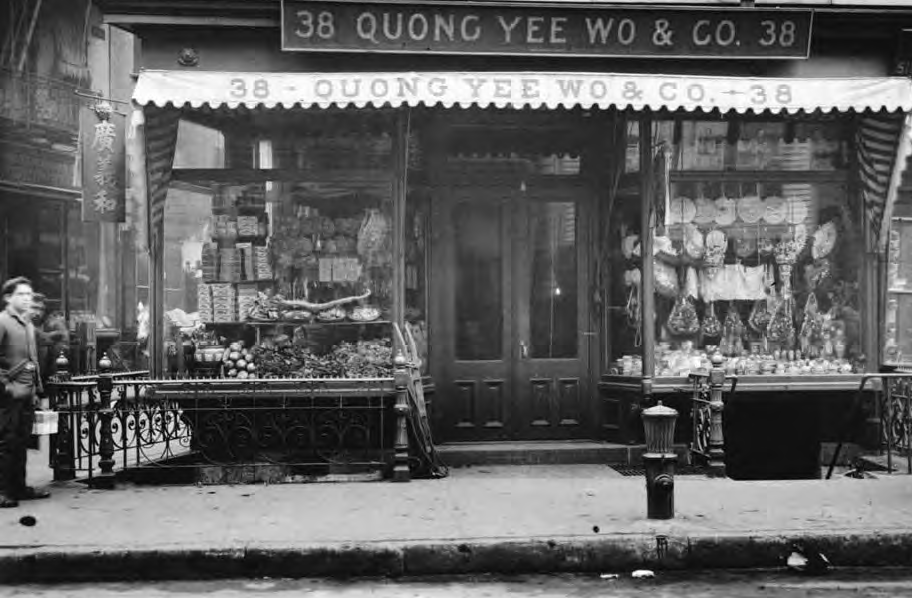 Store in New York City’s Chinatown in 1903. (Library of Congress)

After the transcontinental railroad was completed in 1869, Chinatowns were full of men who were willing to work in worse conditions and for less money than the greater population. Meanwhile, the railroad they had built brought thousands of easterners to the West seeking their fortunes. When these new arrivals found that most of the entry-level jobs had been taken by Chinese men, they declared them a threat and sought protection against the “yellow peril.” This anti-Chinese sentiment resulted in the Chinese Exclusion Act of 1882, which suspended Chinese immigration for ten years, with the exception of diplomats, tourists, students, and merchants. The act also denied U.S. citizenship to Chinese already in the country; thus, Chinese men already in America were unable to send for their families. As a result, well into the twentieth century the population of Chinatowns continued to be predominantly made up of single men. The U.S. Census of 1890 showed that there were twenty-seven Chinese men to every Chinese woman in America, and the gender ratio did not reach parity until 1990.

In 1943, when the United States allied with China against Japan in World War II, the Chinese Exclusion Act was repealed. However, the immigration quota was set at 105 Chinese per year, which removed any effectiveness the repeal might have had toward lessening the Chinatowns’ gender gap. TheWar Brides Act of 1945, however, allowed thousands of wives of Chinese American veterans entry into the United States without being a part of the quota. After the Chinese Revolution of 1949, several thousand professionals, students, and government workers were allowed to become citizens through several refugee acts. The Immigration and Nationality Act of 1952 (also known as the McCarran-Walter Act) ended Asian exclusion from immigration to the United States. As a result of these changes, almost 90 percent of Chinese entering the United States from 1947 through 1953 were women.

It was finally the Immigration and Nationality Act of 1965 (also known as the Hart-Celler Act) that made the most significant changes to the demographic profile of America’s Chinatowns. Among other significant changes, it permitted family members of Chinese Americans nonquota entry. Chinatowns had at last become a place for families.

By the early twenty-first century, the majority of Chinese immigrants came from non-Cantonesespeaking areas of China, particularlyTaiwan, Hong Kong, and other areas of the People’s Republic of China. While Cantonese culture is still dominant in most Chinatowns, Mandarin is also spoken and is the most commonly used language in some of the newly established Chinatowns.

Many of the new immigrants are accustomed to a Western lifestyle, speak Mandarin, Fukien, or other dialects, and are more comfortable going directly to middle-class Chinese communities in the suburbs. These satellite Chinese communities are replacing the old Chinatowns as the initial destination for many Chinese immigrants. They have been established across the country, notably in Flushing, Queens, in New York City, and in Monterey Park, San Jose, and Mountain View in California.

It should be noted that although Chinatowns are most often associated with urban centers, in their early days there were many rural and frontier Chinatowns. These rural Chinatowns gradually diminished as the urban Chinatowns grew, particularly between 1910 and 1940.

San Francisco’s Chinatown is the oldest and most famous in the United States, but it is certainly not the only one. By 1990, New York City’s Chinatown had overtaken San Francisco’s as the largest Chinese American enclave. There are also significant Chinatowns in Oakland and San Jose, California; Los Angeles; Honolulu; Boston; Chicago; and Washington, D.C. Also, while the Chinese American population is still greater in the West, modern trends are to the East.

Populations of U.S. Chinatowns in 2000

For a variety of reasons, U.S. Census Bureau figures for the populations of Chinatown communities appear to be far below actual figures.

Chinese speakers call Chinatowns Tangrenjie (streets of Tang people) and regard them as cities within cities. Entering most Chinatowns can be like entering a different country, as one encounters exotic sights, sounds, and smells. The exotic nature of these communities has always made them places of interest for tourists, novelists, and romanticists. Some of their inhabitants find everything they need to live full lives and seldom leave or interact with outsiders.

Three types of associations, all based on traditional Chinese social organization, have played an important role in the lives of Chinatown inhabitants. Clans, or tsu, are organizations based on kinship or family name. Immigrants with family ties are organized to provide aid to each other in time of need. An individual might be provided the benefits of a clan based solely on his or her family name, even if there is no actual blood tie. The role of the clans has largely been taken over by government agencies.

Secret societies, or tongs, are also organized to give assistance to members in need and to push for the interests of their members in Chinatown and in the larger society. Some tongs were very respectable, but they were often thought of as criminal organizations. Many were involved in illegal activities such as prostitution and drug trafficking, both of which were very lucrative in the predominantly male Chinatowns before World War II. There were constant disputes between these tongs over territory, drugs, and Chinese women, and these led to a series of tong wars during the late nineteenth and early twentieth centuries that terrorized the citizens of Chinatowns from San Francisco to Cleveland.

The benevolent associations, or hui kuan, were organized around the places of origin of their members. They not only provided loans and other assistance but also arbitrated disputes among their members and exercised considerable power over them. Over time, the hui kuan were consolidated into a national group called the Chinese Consolidated Benevolent Association, more commonly known as the Chinese Six Companies. This new organization took on the role the hui kuan had played. These organizations still exist and play significant roles in Chinatowns, especially among immigrants.

The face of Chinatowns has continued to change, but during the early twenty-first century, the communities still faced problems such as substandard housing, crime, and subsistence wages. These problems were growing with increased immigration. By 2008, more than half the population of San Francisco’s Chinatown was foreign-born. Many of the most recent immigrants spoke no English and found themselves trapped in low-paying, dead-end jobs with little time or energy left to learn English or to improve their situation.

At the same time, many new immigrants are highly skilled professionals and international businessmen who avoid the Cantonese-dominated old Chinatowns and turn instead to the middle-class satellite Chinese communities in the suburbs. Called “ethnoburbs” by some, these communities are flush with an influx of foreign capital, particularly from Taiwan, and boast banks, hotels, shopping malls, and office towers. They are much more interactive with the rest of the community than the old Chinatowns.

While Chinese families still keep their differences from the rest of society in many matters, some of the old walls constructed by them and by the greater society are falling. For example, there has been an increase in mixed marriages, something historically resisted by Chinese families. Other evidence, including increasingly favorable attitudes toward ethnic Chinese by Caucasians, lends weight to the idea that Chinese Americans are less likely to remain insulated. These trends have led some sociologists to expect future Chinatowns to be no more than ethnic theme parks. Whatever their future, studies indicate that tourism will play a major role in their survival.

Whether they are destined to continue to be a destination for new Chinese Americans or to become nothing more than tourist attractions or centers of multiculturalism, Chinatowns have established an enduring place in American history.