Significance: Chinese laundries developed as a major occupation for the first wave of Chinese immigrants who came to the United States during the mid-nineteenth century. Laundries opened throughout the country and became uniquely identified with this ethnic group. The Chinese launderer stereotype appeared in popular culture and media.

Although the first Chinese had arrived in the United States in 1820, the first significant wave of Chinese immigration did not occur until soon after the California gold rush in 1849. With hopes of making a fortune in “Gold Mountain” and then returning to their families in China, thousands of young men left their impoverished villages in southern China to travel to California. They became contract laborers who worked in the gold mines and on the railroads. However, growing anti- Chinese sentiment and restricted urban labor markets forced the increasing numbers of Chinese immigrants to seek other work.

In 1851,Wah Lee opened the first Chinese hand laundry in the United States. His small, leased storefront in San Francisco had a simple sign: “Wash’ng and Iron’ng.” Within a few weeks, the business had expanded to twenty washermen working three shifts daily. A laundry was an ideal business for Chinese immigrants, since it required no special skills or venture capital, and Euro-American men considered it undesirable work. Typically, laundry work required long days of exhausting manual labor over kettles of boiling water and hand irons heated on stoves. By the 1870’s, Chinese laundries were operating in all towns with Chinese populations.

However, as more groups competed for work, prejudice against Chinese immigrants intensified. In 1880, 95 percent of San Francisco’s 320 laundries operated in wooden buildings. The city passed an ordinance requiring owners of laundries in wooden buildings to obtain a permit. Two-thirds of the laundries were owned by Chinese people, but none of them was granted a permit. Only one non-Chinese owner was denied.

The Chinese Exclusion Act of 1882, the first race-based immigration law, was designed to prohibit Chinese immigration and deny citizenship to Chinese people for a decade. In 1883, 8,031 Chinese people, including immigrants returning from visits to China, entered the United States. However, in 1884 only 279 entered the country, and in 1887, only 10 entered. In 1892, the act was extended for another 10 years, so for decades there were violent crimes and discrimination aimed at the Chinese, but they found safety in Chinatowns. By the early twentieth century, there were Chinese laundries in every major city. The Chinese persevered, taking actions such as forming the Chinese Hand Laundry Alliance in 1933. The Chinese Exclusion Act was repealed in 1943. By then, entire families worked and lived in Chinese laundries, and the new generations of Chinese Americans gradually became assimilated into American society.

Fromthe 1870’s through the 1890’s, trade or advertising cards were popular for promoting a service, product, or event. The stereotype of Chinese laundrymen was used to advertise laundry-related products, such as detergents, wringers, and soap. For example, the Lavine Soap trade card showed small, cute, pig-tailed Chinese with the product. A silent film of 1895, The Chinese Laundry Scene, featured the popular slapstick vaudeville act Robetta and Doretto as an Irish police officer and a Chinese laundry worker quarreling. 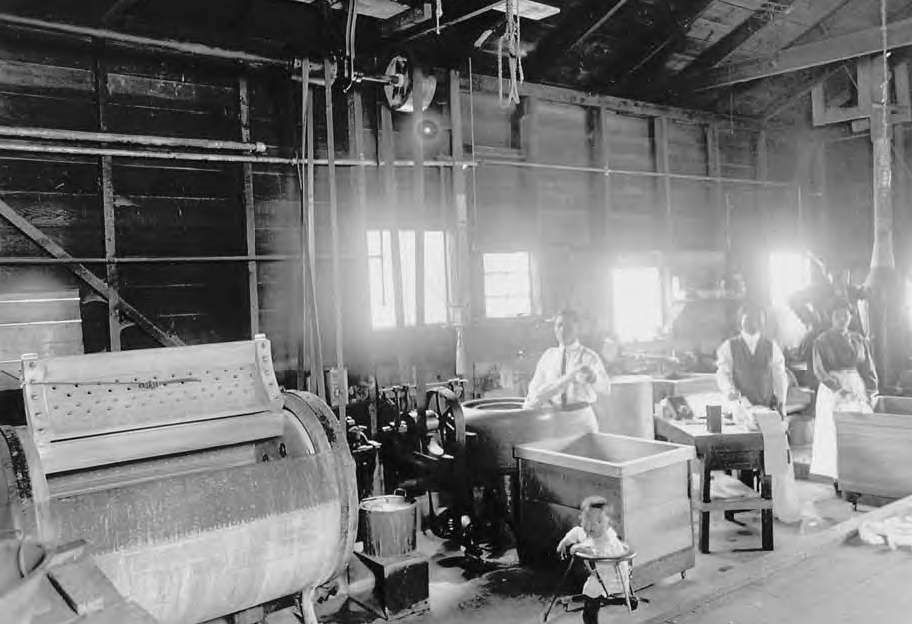 In 1922, the Los Angeles Times ran a “Junior Times” section that included a variety of mechanical paper puppets. Along with policemen, animals, a jack-in-the-box, and other figures was “Lee Ling, Chinese Laundry Man.” Shockingly derogatory portrayals occurred in Laundry Blues, a Van Beuren cartoon distributed by RKO Radio Pictures in 1930. Because it was so overtly racist, this cartoon was censored and banned.

An ingrained part of popular culture, the old comedic associations were carried into television. A television commercial for Calgon water softener that was popular during the 1970’s featured a white woman asking a laundry owner named Lee how he gets his shirts so very clean. He replies, “Ancient Chinese secret.” The secret is exposed when Lee’s wife sticks her head out from the back room and shouts that they need more Calgon.

The Chinese laundryman stereotype persisted, but by the 1950’s the actual traditional Chinese laundries were becoming obsolete. Self-service laundromats proliferated during the 1950’s. Generations of children who grew up in laundries pursued higher education and entered other occupations. With the end of the civil war in China in 1949, a new wave of Chinese immigration had begun. These immigrants often came from upper- and middle-class families searching for a better life in America or were well-educated intellectuals pursuing advanced degrees. In 1993, writer Alvin Ang and composer John Dunbar presented the musical The Last Hand Laundry in Chinatown (A Requiem for American Independents) as a homage to Chinese laundries.