Definition: Clandestine organizations imported to the United States whose origins go back to earlier Chinese history

Significance: The secret societies founded in China several centuries ago to combat unjust rulers often turned to criminality. During the mid-nineteenth century, following the discovery of gold in California, many members of these societies emigrated to the United States. They frequently retained their ancient mores and brought new types of criminal activities to America that further turned the populace against them.

To the general American public, the best-known Chinese secret societies are the tongs and the triads. Long the subject of countless lurid films and literature, the tongs were a specifically American creation, established by the most poor Chinese immigrants who came to work in the western mining camps and on railroad construction. Their lineages went back to the secret groups formed in China to attempt to overthrow the Qing Dynasty that ruled from the mid-seventeenth century to 1912.

Originally merchant associations in U.S. Chinatowns, the tongs were established to provide mutual support and protection against other Chinese organizations and hostile outsiders. Racial prejudice against the Asian immigrants in the western United States was widespread even before the Chinese Exclusion Act was passed in 1882. Early tong activities were benign. However, in the crowded Chinatowns many of these organizations eventually turned to crime. There was generally a shortage of marriageable Chinese women available to the immigrants because of U.S. exclusionary laws, so prostitution and even slavery were profitable, as was gambling. 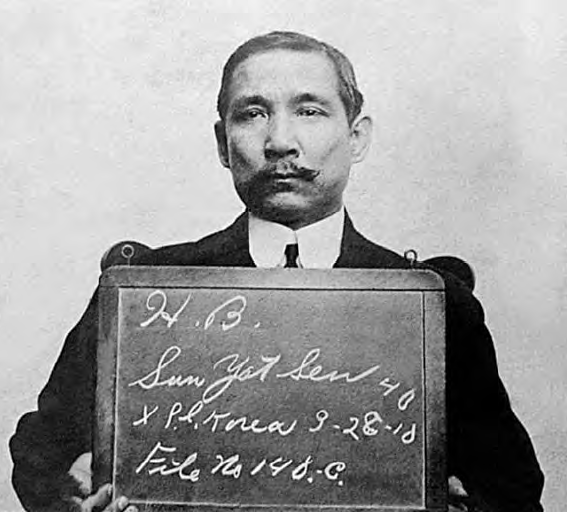 Federal government photograph of Sun Yat-sen, the future first president of the Republic of China, that was made during his 1909-1910 visit to the United States. The photograph was kept in a file relating to Sun’s entry into the United States under the restrictions of the Chinese Exclusion Act. (NARA)

Intra-Chinese conflicts popularly known as “tong wars” arose out of intense competition for spoils among tong gangs. They were usually fought among warring factions of immigrants and did not involve outsiders. They were particularly prevalent in the Chinatowns of San Francisco, Cleveland, and Los Angeles. These conflict were bloody, as combatants used hatchets, meat cleavers, and machetes as weapons. The wars began to decline during the 1930’s, as new generations of American-born Chinese achieved middle-class lifestyles and Christianity took increasing hold.

Like the tongs, the triads are criminal gangs that trace their ancestry to secret societies formed to remove the Qing Dynasty from power. According to legend, the first such group was begun by Buddhist monks who communicated with secret codes to confound imperial agents and who mastered the martial arts. They adopted the color red as their symbol. Many such triads were established, and they ultimately became criminal organizations. Among the best known of them were the White Lotus Society, the Red Fists, and the Cudgels.

At the beginning of the twentieth century, the triad-like Society of Harmonious Fists (known by theWestern powers as the Boxers) attempted to rid China of the foreign powers that were exploiting the country. The so-called Boxer Rebellion of 1900 was the result. The rebellion was eventually crushed, but not until after many deaths had occurred. In the chaos surrounding the fall of the last Chinese emperor a decade later, the triads flourished and were utilized by the warlords who operated almost unchecked in many parts of the country. Among the most prominent triad members were Sun Yat-sen, founder of the modern Chinese republic, and Chiang Kai-shek, who later became president of nationalist China.

With the rise to power in China of the communists under Mao Zedong in 1949, members of the old triads scattered to such places as Thailand, British- ruled Hong Kong, Portuguese-ruled Macao, and San Francisco. Those who had come to the United States in earlier years had often become members of various tongs. While the tongs gradually lessened in importance, the triads built a worldwide criminal network. Smuggling, both of drugs and human beings, remains a large part of their operations as well as extortion, counterfeiting, money laundering, and contract murders.

As late as the early twenty-first century, violent triad-affiliated Chinese American street gangs continued to flourish in New York and along the West Coast, often victimizing other Chinese Americans. They are also believed to have been active in such cities as Las Vegas, Boston, Miami, and Chicago. The triads have been compared to the Italian Mafia in their organization and customs, including the pricking of fingers and a lengthy list of sworn oaths as part of their initiation rite.