Bracero, the Spanish word for “manual laborer,” is the name given to “temporary” Mexican laborers who entered the United States under congressional exemptions from otherwise restrictive immigration legislation. More specifically, the Bracero Program was the informal name given to the Emergency Farm Labor Program initiated in 1942 and extended until 1964 that enabled Mexican farmworkers to legally enter the United States with certain protections in order to ensure the availability of low-cost agricultural labor. At the same time that the Mexican government selected the allotted quota of workers for the Bracero Program—averaging almost 300,000 annually during the 1950s—a similar number were entering illegally and became commonly known as “wetbacks” (many having waded across the Rio Grande). Together, the legal and illegal immigrants of this period made Mexico the predominant country sending immigrants to the United States.
Mexican laborers first came to the United States in significant numbers in the first decade of the 20th century, replacing the excluded Chinese and Japanese laborers. Wartime demands for labor during World War I (1914–18) coupled with the labor needs of southwestern agriculturalists, encouraged the U.S. Congress to exempt Mexicans as temporary workers from otherwise restrictive immigrant legislation. As a result, almost 80,000 Mexicans were admitted between the creation of a “temporary” farmworkers’ program in 1917 and its termination in 1922. Fewer than half of the workers returned to Mexico. Linking with networks that organized and transported the Mexican laborers, workers continued to enter the United States throughout the 1920s, with 459,000 officially recorded. Although there were no official limits on immigration from the Western Hemisphere, many Mexicans chose to bypass the official process, which since 1917 had included a literacy test; the actual number of Mexican immigrants was therefore much higher.
Most of these Mexicans worked in agriculture in either Texas or California, but their numbers were also significant in Kansas and Colorado, and migrants began to take more industrial jobs in the upper Midwest and Great Lakes region, leading to a general dispersal throughout the country. Between 1900 and the onset of the Great Depression in 1930, the number of foreign-born Mexicans in the United States rose from 100,000 to 639,000. With so many American citizens out of work, more than 500,000 Mexicans were repatriated during the 1930s. When the United States entered World War II in December 1941, the need for labor was urgent, leading to passage of the Emergency Farm Labor Program in August 1942. The Bracero Program, as it was commonly called, emerged from an agreement between the U.S. and Mexican governments with five major provisions:
1. Mexicans would not engage in military service
2. Mexicans would not suffer discrimination
3. Workers would be provided wages, transportation, living expenses, and repatriation in keeping with Mexican labor laws
4. Workers would not be eligible for jobs that would displace Americans
5. Workers would be eligible only for agricultural jobs and would be subject to deportation if they worked in any other industry
Despite wages of only 20¢ to 50¢ per day and deplorable living conditions in many areas, braceros both legal and illegal continued to come, finding the wages sufficient to enable them to send money home to their families. 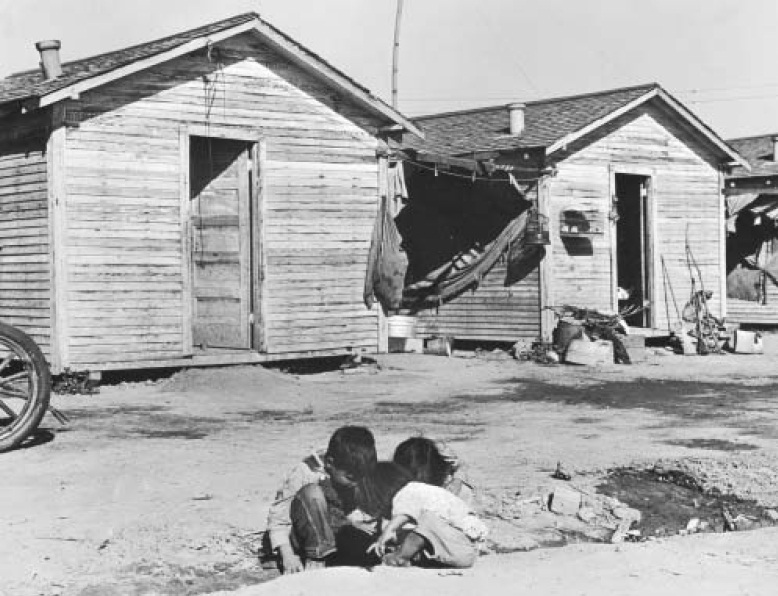 Company housing for Mexican migrant laborers, Corcoran, California, San Joaquin Valley, 1940 (National Archives)
The original Bracero Program ended in 1947 but was extended in various ways until 1964. During the 22 years of its existence, almost 5 million braceros worked in the United States, contributing substantially to the agricultural development of the United States and remitting more than $200 million to relatives in Mexico. The growth of liberal political power in the United States, increased mechanization in agriculture, and a rising demand for labor in Mexico all contributed to the ending of the program in 1964.