Definition: Status of being a citizen, or an inhabitant of a country or other political entity, who enjoys its full privileges and rights, including the right to vote, to hold elective office, and to enjoy the full protections of government

Significance: Under the U.S. Constitution and laws of the United States, the status of citizenship entitles possessors, whether native born or naturalized, to all established civil rights and also includes the duty of rendering allegiance to the country.

U.S. citizens possess a number of constitutional rights that cannot be claimed by noncitizens, even if the latter legally reside within the United States. For example, Article I of the original Constitution specifies that only citizens are qualified to serve in Congress. Article IV, section 2, further recognizes that citizens of each state are entitled to certain “privileges and immunities” in all the states, a clause that the U.S. Supreme Court has interpreted as referring to “fundamental rights” inherent in a free government. The Fourteenth Amendment further prohibits the states from abridging the “privileges or immunities” that accompany U.S. citizenship. Finally, constitutional amendments relating to voting rights apply only to citizens of the country.

Individual state constitutions, as well as federal and state legislation, have placed many additional restrictions on the rights and privileges of noncitizens. Although the U.S. Supreme Court has overturned some of these restrictions as unconstitutional, it has also upheld many of them, including restrictions on foreign travel, welfare benefits, employment in public service, and the buying and selling of property. Noncitizens, moreover, can be deported for a number of reasons, even for certain political activities that American citizens have an unquestioned legal right to pursue without fear of punishment.

Nevertheless, the Constitution and U.S. laws guarantee many rights for noncitizens. All the liberties guaranteed by the Bill of Rights apply to “persons,” not just “citizens.” Likewise, the Fourteenth Amendment prohibits a state from denying “due process” or “equal protection” to any “person” under its jurisdiction. During the second half of the twentieth century, the Supreme Court’s interpretations of the Fourteenth Amendment significantly lessened the number of rights applicable only to citizens. After the landmark decision Graham v. Richardson (1971), for instance, the Supreme Court began holding that discrimination in employment on the basis of alienage must be justified by a very strong rationale.

For the most part citizens by naturalization are guaranteed the same legal rights as citizens by birth. Two significant exceptions apply, however. First, the U.S. Constitution explicitly states that only a natural-born citizen can serve as the president. Second, although the Supreme Court held in Trop v. Dulles (1958) that birthright citizens could not be involuntarily deprived of their citizenship, the Court subsequently approved the revocation of naturalization whenever immigrants were found to have falsified information when they entered the country or applied for naturalization.

In addition to legal rights, the status of citizenship is often desired because of its social and symbolic significance. Citizenship provides many persons with a sense of belonging; it has the meaning of full membership within a national community. When persons are classified as “foreigners” or “aliens,” citizens tend to look upon them as outsiders, as “them,” rather than as “us.”

In view of the importance of immigration in U.S. history, it is not surprising that the issue of how to become a citizen has often been controversial. The original Constitution, as ratified in 1789, said nothing about birthright citizenship. Consequently, the English common-law rules of jus soli and jus sanguinis continued in force. In contrast, Article I of the Constitution provided the U.S. Congress with unrestricted discretion in establishing “a uniform rule of naturalization.” Accordingly, the Congress enacted a law in 1790 that restricted naturalized citizenship to “free white persons.” Racial bias was even more evident in the Supreme Court’s decision in Dred Scott v. Sandford (1857), which held that no persons of African ancestry were eligible for U.S. citizenship, regardless of their locations of birth. Eleven years later, however, this infamous decision was reversed by the Fourteenth Amendment, which specified that the status of citizenship, both state and national, was automatically conferred on all persons born or naturalized within the United States. 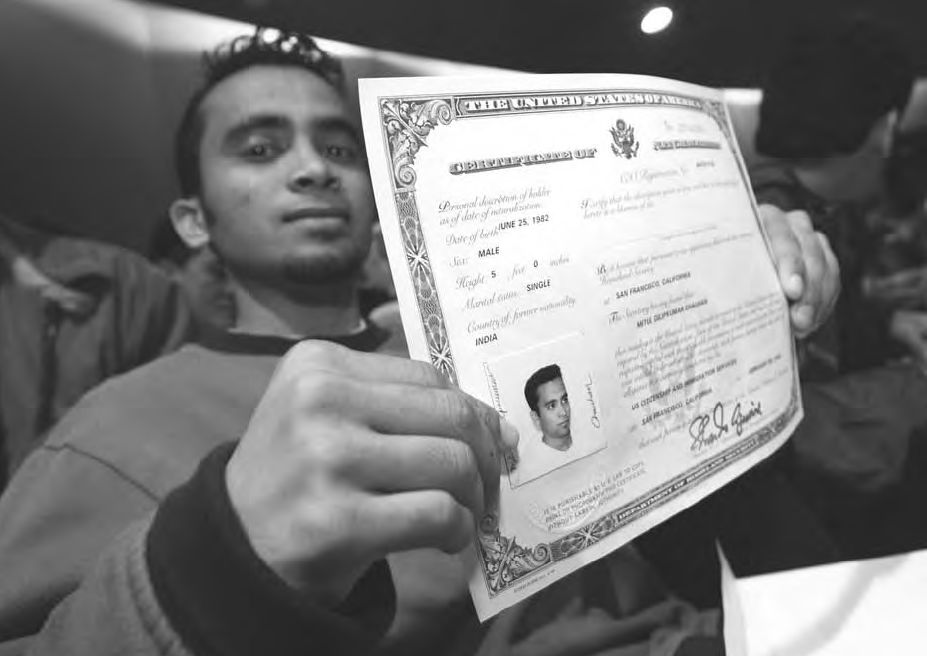 Newly naturalized American citizen holding his certificate of naturalization after a ceremony in San Francisco in which more than 1,400 immigrants were sworn in as citizens. (Getty Images)

Following ratification of the Fourteenth Amendment, there was some debate about the legal status of children who were born in the United States to nonwhite parents ineligible for citizenship. This debate was finally settled in United States v. Wong Kim Ark (1898), in which the Supreme Court interpreted the amendment to mean that all such persons automatically acquired citizenship on the basis of the common-law rule of jus soli. The Wong Kim Ark decision had no effect on the legal status of nonwhite persons who had already immigrated into the United States. Although the Fourteenth Amendment required each state to provide the “equal protection of the laws” to all persons under its jurisdiction, this clause was not applicable to federal legislation. It was not until passage of the Immigration and Nationality Act of 1952 that Congress finally abolished the last remaining racial restrictions on eligibility for naturalization.

Until 1922, the citizenship status of married women was usually determined by the status of their husbands. Alien women acquired U.S. citizenship when they married Americans, and American women lost their citizenship when they married aliens. The Cable Act of 1922 provided that alien women could no longer become citizens simply through marriage; it also specified that marriage of American women to alien men who were eligible for naturalization would not automatically cause loss of American citizenship. Although the Cable Act continued to take away the citizenship of women who married men ineligible for naturalization, an amendment to the act in 1931 eliminated this discriminatory provision. Finally, on May 24, 1934, President Franklin D. Roosevelt signed an equalization bill that eliminated all discriminatory treatment because of sex or marriage.

Ineligibility because of political opinion has historically been a prominent feature in U.S. naturalization law. In United States v. Macintosh (1931), for example, the Supreme Court upheld a requirement that applicants for citizenship must pledge to bear arms in defense of the country, and the majority opinion in the case defined naturalization as “a privilege to be given, qualified, or withheld as Congress may determine.” During the Cold War that lasted from the late 1940’s until the late 1980’s, discrimination was especially virulent against persons who openly espoused prosocialist or procommunist sentiments. Although policies were liberalized after the end of the ColdWar, persons with extremist viewpoints continued to be ineligible for naturalization, even though expression of such viewpoints is protected by the First Amendment.

Another important addition to U.S. naturalization law was the Child Citizenship Act of 2000, which allowed many foreign-born, biological, and adopted children of U.S. citizens to acquire citizenship status automatically when they entered the country as lawful permanent residents. To qualify, a child must have at last one parent who is already a U.S. citizen, be under eighteen years of age, and live under the custody of the parent having citizenship. If the child is adopted, the adoption process must be final and complete.

In order for adult immigrants to become naturalized citizens in the early twenty-first century, they generally had to live within the country as permanent residents for five years, during which time they had to demonstrate “good moral character.” Disqualifying moral behaviors included drug abuse, prostitution, illegal gambling, terrorism, polygamy, Communist Party membership, advocacy of violent revolution, and lying to immigration officials. Applicants also had to demonstrate an ability to use simple English and pass a test on the history and government of the United States. Finally, applicants had to take an oath promising to give up foreign allegiance, to obey the U.S. Constitution and U.S. laws, and be willing either to fight for the U.S. military or to performsome alternative service useful to the national interest.