Since the mid-twentieth century, tumultuous developments in Colombia have spurred large numbers of Colombians to emigrate to the United States. As in many other Latin American countries, Colombia’s political instability has played a major role in motivating people to leave the country. Colombia has, in fact, lacked political stability since it became independent from the Spanish Empire in 1819. In 1948, a civil war broke out between conservative and liberal factions within the country. Throughout the 1950’s—a period remembered as the Violencia—hundreds of thousands of Colombians were killed or displaced from their homes. The election of President Carlose Lleras Restrepo during the late 1960’s brought some stability to the country. However, political turmoil returned in 1974, with the defeat of the ruling political party. The 1980’s witnessed a dramatic upsurge of Colombia’s political, social, and economic problems, due to the unprecedented factor of drug-related crime. The widespread sale and use of illegal drugs, particularly cocaine, was the primary catalyst for the continuing unrest in Colombia. 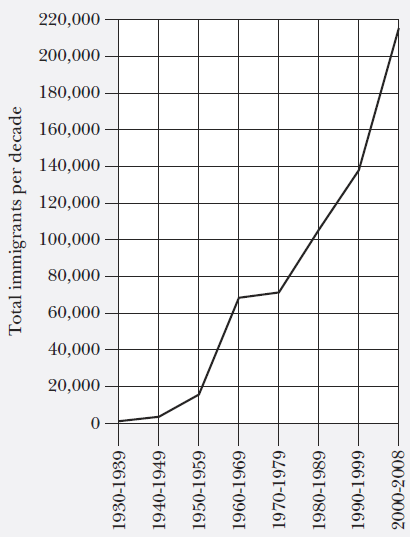 Through the end of the 1980’s, Colombians living in the United States were almost exclusively upper-middle- and upper-class professionals. Migration of these individuals resulted in a massive brain drain from Colombia. During the 1990’s, however, less educated Colombian laborers began immigrating to the United States in larger numbers.

The emergence of Colombia’s illegal narcotics industry during the 1980’s compounded the nation’s political and economical problems. Drugrelated crime began affecting the lives of everyday Colombians. Through murder, assassination, bombings, and kidnappings, the drug cartels gained so much power that they demanded political control and threatened the very foundation of Colombia’s political structure. Growing political instability brought new levels of internal population movements and emigration. Many Colombians fled to Venezuela, Spain, and the United States. Colombia’s problems with drug cartels, economic recession, and political instability persisted throughout the 1990’s.

Colombian Immigrants to the United States

Escalating violence and political disorder in Colombia have driven increasing numbers of its citizens to seek asylum in other countries, and most asylum seekers have come to the United States. In 2003, 11,600 Colombian immigrants classified as asylum seekers were in the United States, making Colombians the second-largest asylum applicant population. The U.S. government has the option of granting Colombians temporary protective status (TPS). This status is normally reserved for refugees from countries whose citizens are in grave imminent danger. However, that status is rarely granted, and the United States has not acknowledged appeals from human rights organizations and the Colombian government to grant Colombians the status. Colombians attempting to enter the United States must instead secure legal immigrant status—a process all immigrants face but whose difficulty many underestimate. Although many Colombians are granted legal permanent residence status, many others are stuck in an ambiguous, undocumented category. In 2000, Colombia was believed to have the fourth-largest number of undocumented residents in the United States.

Colombians in the United States

Since they first arrived in the United States in substantial numbers, Colombians have strived to establish their own identity among the numerous Hispanic populations and find their place within mainstream America. However, many immigrants endure the effects of stereotyping and discrimination because of negative American perceptions of Colombia as a drug-trafficking, criminal country, even though a minuscule number of Colombians in the United States engage in illegal activities.

Remittances, the transfers of money from Colombian Americans to relatives in Colombia, are an important part of immigrant life. In 2006 alone, Colombian residents of the United States remitted an estimated $4.2 billion to Colombia to aid relatives and friends. From 1990 to 2004, the dollar value of remittances to Colombia grew 25 percent annually. The increasing number of remittances further illustrates the dramatic rise in migration from Colombia to the United States, and provides evidence of greater interdependence between the two nations and their peoples.