Significance: A New England state originally settled by British Protestants, Connecticut’s long immigrant history has been colored by its nearness to one of the primary ports of entry for immigrants, whom it has offered a variety of occupational opportunities. Its immigrant history exemplifies the benefits and problems in a diversified urban society.

Connecticut’s earliest immigrants were primarily English and Scottish. However, the early nineteenth century introduced substantial numbers of Germans, many of whom were skilled workers in fields such as furniture manufacturing. Germans tended to establish their own social, musical, and athletic organizations in their new abodes. Many German immigrants were Jews, who contributed significantly to the state’s business development, particularly in the state capital, Hartford, which became a notable center of Zionism in the nation. However, the Irish formed the state’s largest immigrant group up to the 1850’s. They came as weavers, spinners, and unskilled railroad and canal workers. During the second half of the nineteenth century, many of them became police officers, firefighters, omnibus drivers, and railroad conductors.

Around 1850, a growth spurt began in Connecticut’s population, partly because of the state’s proximity to New York, where the bulk of European immigrants entered the United States. In 1850, Connecticut’s immigrant population of more than 38,000 constituted about 10 percent of all state residents, but by 1870, that proportion had risen to nearly 25 percent. Increases in immigrant numbers were particularly noticeable in Hartford and New Haven. Of the 113,000 immigrants living in Connecticut in 1870, more than half were Irish.

Immigrants contributed heavily to the growth of Connecticut’s labor unions. They also contributed to the frequency of labor strikes, which started prompting state labor laws during the 1880’s; however, these laws were seldom enforced rigidly. An economic downturn during the Panic of 1893 and a growing awareness of the potential political influence of Irish Americans contributed to a short-lived but fierce movement to deny political office to Roman Catholics, chiefly because of their supposed allegiance to the pope. There was also a movement to exclude Roman Catholic teachers from public schools. However, the American Protective Association that was behind these movements failed, partly because Catholic voters were already too influential to be suppressed. Meanwhile, new immigrants fromsouthern and eastern Europe began to appear. These included Russians, among whom Jews were even more predominant than among the earlier German immigrants. 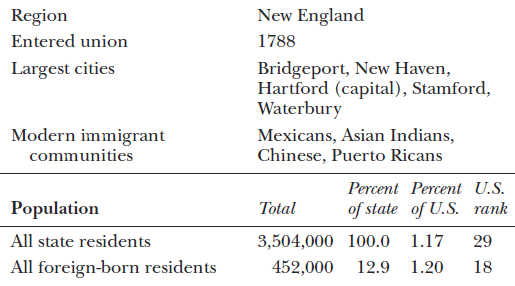 The early decades of the twentieth century saw considerable gains in the Italian, Polish, and French Canadian immigrants in Connecticut. The earliest Italian newcomers were chiefly unskilled laborers, but they developed into skilled factory workers, market gardeners, and members of the building trades. They also found work as barbers, cobblers, tailors, and musicians. Many Italians settled in Hartford, New Haven, and Waterbury. The incoming Poles were mainly farmers and tended to remain farmers longer than immigrants from most other nations. However, many Poles worked in textile factories. With one the highest proportions of Polish immigrants among American states, Connecticut had the most Poles of any New England state. Connecticut’s French Canadians, who were less numerous than in other New England states, worked mainly in textile factories. Many lived in the most crowded sections of Hartford.

During the 1930’s, the Federal Writers’ Project produced a valuable ethnic survey of Connecticut. Many of the people interviewed in this survey explained how kinship and friendship networks had affected their lives. Immediately after arriving in Connecticut, 84 percent of new immigrants lodged with relatives or friends from Europe. Some European immigrants considered domestic jobs in wealthy families to offer the best employment opportunities, but young immigrants tended to prefer factory work. About 40 percent of the women tended lodgers and boarders in rooming houses, washed clothes, did piece work, or assisted husbands in family stores—enterprises that also often employed families’ children.

Home-based work had declined by the late 1930’s, and more women went into factories or stores or performed personal services, until about 65 percent of the women worked outside their homes. Older children who worked away from home expected to turn over the bulk of their earnings to their parents. The earnings of girls were often spent on their brothers’ educations. Parents did not expect their children to become financially independent, but the children often did. Young women in particular discovered new possibilities by being in the workforce, and some became active in labor unions.

By the end of the twentieth century, Connecticut’s Latino population was increasing sharply. The vast majority of the state’s Latino newcomers are Puerto Ricans, who are already American citizens when they arrive. Mexican immigration has also become important. The heavy population of Latinos, especially in Hartford, where slightly more than half the public schools’ students live in homes in which English is not the primary language, has created an important educational problem. Poverty is another issue. A report issued in 2005 found that 15 percent of the state’s immigrant population— compared to 9 percent of the general population— fell into the category of families earning less than twenty thousand dollars a year. Immigrants from Asia, primarily India and China, have not been as numerous as Latinos, but they have generally been better educated and more prepared to perform at a high level.

Illegal immigration has become an important political issue in Connecticut. Individual communities have responded to the problem in sharply contrasting ways: either toward providing sanctuary status for undocumented aliens or toward vigorous application of the law. New Haven has undertaken a program of identifying and assisting both documented and undocumented immigrants. This program has been popular in the city center but unpopular in its suburbs. Danbury, which has a large number of undocumented alien residents, has had city detectives work with federal immigration officials to find and remove them.