Significance: Chinese coolies came to the United States both as free immigrants looking for work and as contract workers hired to build America’s first transcontinental railroad. They worked in gold mines, on the railroad, and on California levees, and their work ethic set a high standard.

The term “coolie” may have derived from the Hindi Kuli, an aboriginal tribal name, or kuli, a Tamil word meaning “wages.” Europeans used the term to refer to low-status laborers in their Asian colonies. Early nineteenth century Chinese workers in the United States were called “coolies,” which soon acquired a pejorative connotation.

Chinese workers in the United States during the 1849 California gold rush soon ran into discrimination. Thugs and bigots victimized them and often set them in conflict against one another. When gold became more difficult to mine, coolies were relegated to shantytowns in San Francisco and Sacramento, earning paltry livings as servants, laundrymen, cooks, truck farmers, peddlers, and construction workers.

In 1865, fifty Chinese immigrants were hired to work on the Central Pacific Railroad roadbeds.Unlike the other workers, most of whom were Irish, the Chinese worked from dawn to dusk in extreme weather. They were so “tireless and unremitting” (as a newspaper from 1869 described) in their work that the railroad sent recruiters to China to bring back thousands more workers. At one time, 60 percent of the Central Pacific workforce was Chinese. They worked for less pay than white workers and faced serious economic restrictions, but they were still able to make a better living in America than they could in China. Because their exceptionally efficient work ethic and willingness to labor under horrendous conditions made them such valuable workers, California endorsed the Burlingame Treaty of 1868, which granted the Chinese free entry to the United States. In 1880, the treaty was renegotiated and amended to suspend, though not prohibit, Chinese immigration. 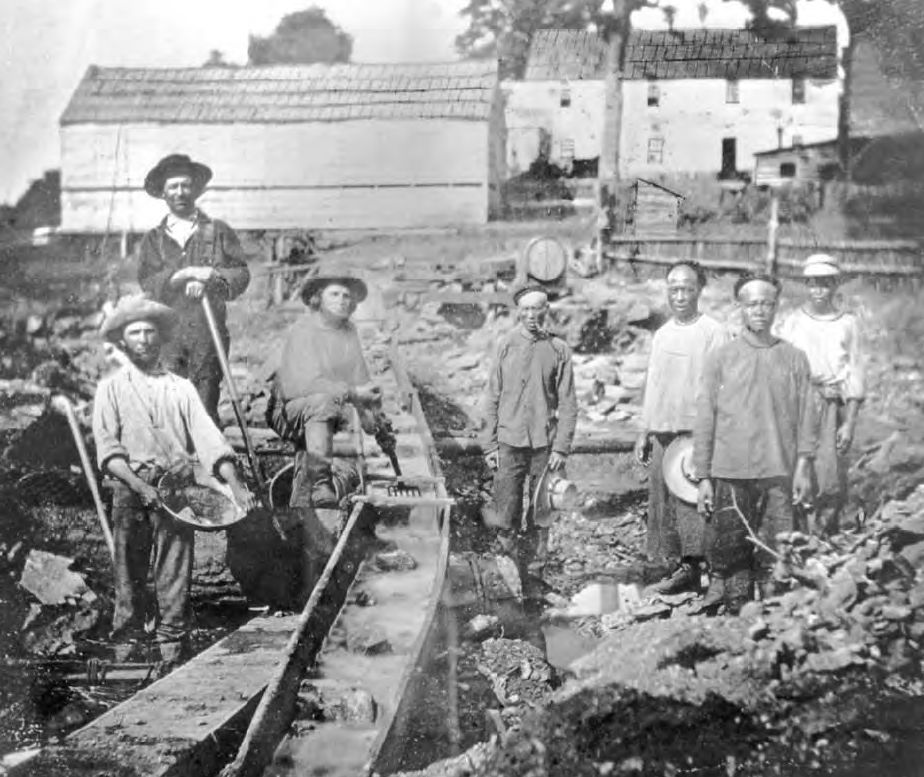 Coolies were also involved in the construction of a network of levees in California. During the 1870’s, they worked on more than one thousand miles of levees in the Sacramento-San Joaquin River Delta, turning swampland into fertile farmland. By the end of the decade, when the U.S. economy was in a slump and white workers went on strike, Chinese coolies were hired as “scabs,” and anti-Chinese sentiment increased. White workers began disparaging Chinese workers even more than before, characterizing them as petty criminals, carriers of leprosy, white slavers, and opium smokers, all willing to work at menial jobs for less pay and under worse conditions than “regular” American workers. Writers and journalists satirized the “heathen Chinee,” and some intolerant Americans, including Irish teamster Dennis Kearney, tried to run them out of town and the country. Race riots erupted against the Chinese in California, and several immigrants were lynched.

The federal Chinese Exclusion Act of 1882 barred free immigration of Chinese for ten years, essentially stopping the influx of cheap Chinese laborers, who had proven to be clean, sober workers who worked harder, better, and longer and for less money than other workers. President Chester A. Arthur had vetoed the first Chinese Exclusion Act (which called for a twenty-year immigration suspension) as violating the Burlingame Treaty, but the revised act passed and was extended indefinitely and made permanent in 1902. In 1943, when China allied with America in the war against Japan, the act was finally repealed.