Significance: During the late nineteenth and early twentieth centuries, about one-sixteenth of all European Czechs immigrated to America, while the Slovaks made up the sixthlargest group of immigrants during this period of the “new immigration.” Eventually, about one-fifth of the entire Slovak nation arrived, trailing only the Poles in numbers among all Slavic immigrant groups in the United States.

The overwhelming majority of Slovak and Czech immigrants arrived in the United States during the fifty years prior to the outbreak of World War I. The first immigrant from the Czech lands, Herrman Augustin, arrived in 1633 and eventually owned a large estate in Maryland; the first known Slovak in America, Andrej Jelik, arrived around the mideighteenth century. A small group of religious dissenters from the Czech lands, known as Moravians, arrived before the American Revolution. Members of both ethnic groups fought in the AmericanWar of Independence and the U.S. Civil War.

Czechs and Slovaks Before World War I

A few Czech immigrants continued to arrive over the next two centuries after 1633. Following the failed 1848 revolutions in the Habsburg monarchy, the first sizable number of Czechs came to the United States, with a steady flow by the late 1850’s, who usually came as family groups initially attracted by the lure of cheap land. Besides farming, by the turn of the century about one-half of Czech immigrants in America lived in urban settings, where they worked as small businessmen and as skilled and unskilled laborers. By the onset of World War I in 1914, approximately 350,000 highly skilled and mostly literate Czechs had settled in the United States.

The Slovaks began to immigrate to America in large numbers during the late 1870’s to escape problems of overpopulation and unemployment at home. The overwhelming majority of these poorly educated agricultural workers found work as unskilled laborers in coal mines and heavy industry, especially steel mills, where, by 1909, about 10 percent of all iron- and steelworkers were Slovak. They usually came as single men expecting to earn enough money to return home and purchase land, prior to realizing the new economic benefits of America. By the 1880’s, Slovak women began to arrive to satisfy the need for spouses, while married men either returned home or sent funds to bring their families to the United States. More than 60 percent of all Slovak immigrants returned at least once to the old country before the war. It is estimated that 650,000 Slovaks lived in the United States in 1914.

Both groups flourished in the United States. Wherever a community of Czechs and/or Slovaks could be found, thriving ethnic newspapers, fraternal and cultural clubs and organizations, and parishes arose. However, these entities remained separated along Roman Catholic and Freethinker lines for the Czechs, while the Slovaks were even more divided among Roman Catholics, Lutherans, Calvinists, and Byzantine-rite (Uniate or Greek-rite) Catholics.

Immigration from Czechoslovakia and the Czech and Slovak Republics, 1920-2008 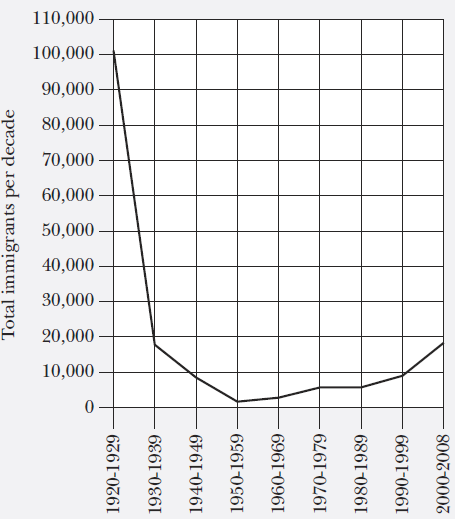 Source: Department of Homeland Security, Yearbook of Immigration Statistics 2008. Figures include only immigrants who obtained legal permanent resident status. Czechoslovakia existed from 1918 until 1989. Figures for 1990-2008 include immigrants who identified themselves as “Czechs,” “Slovaks,” and “Czechoslovakians.”

World War I and Afterward

The start of World War I in August, 1914, effectively cut off Slovak and Czech immigration, but ethnic leaders of both groups in the United States realized that the war presented an opportunity for greater freedoms for their homelands against the Austrian Germans and the Hungarians. Leaders of the American Czechs and Slovaks met in Cleveland, Ohio, in 1915, to propose a common, independent state after the war. In May, 1918, the Pittsburgh Pact updated the Cleveland Agreement, calling for the new joint state. The American Czechs and Slovaks collected hundreds of thousands of dollars for relief efforts of their conationals abroad and the new Czecho-Slovakia/Czechoslovakia, enlisted in foreign armies and the U.S. Army after the United States entered the war in 1917, and actively supported the war effort against the Central Powers. Their work paid off with the proclamation of the Czechoslovak Republic in October, 1918.

Despite the creation of the new country with greater opportunities for ethnic Czechs and Slovaks, immigration resumed after the war. The numbers rose steadily until the immigration laws of the 1920’s effectively limited the total number of immigrants from Czechoslovakia to about three thousand annually. The 1920’s and 1930’s mark the height of Slovak and Czech cultural life in the United States. However, without the influx of numerous new immigrants, both groups began to acculturate and assimilate, with the second and third generations from the mass immigration period becoming more American. These generations lost interest in the language and the old country ways of their parents and grandparents, preferring to speak English and marrying spouses from other ethnic groups. This trend accelerated after World War II, with people leaving their old ethnic neighborhoods, parishes, and organizations for the suburbs, where the Czech and Slovak Americans retained only aspects of their forefathers’ culture, usually concerning holiday celebrations. Although there was a brief surge in immigration after the communist takeover of Czechoslovakia in 1948 and the Soviet invasion of the country in 1968, these immigrants were largely professional people and intellectuals who had little in common with the earlier arrivals.

Profile of Czech and Slovakian immigrants

According to the 1990 U.S. Census, almost 1.9 million Americans professed Slovak ancestry, about 1.2 million Americans claimed Czech roots, while approximately 300,000 considered themselves Czechoslovakian. The 2000 U.S. Census saw a slight decline for the Czech Americans, while the Slovak response was close to 800,000, nearly a 58 percent drop in ten years. This decline probably resulted from“Slovak” being listed as an example category in the 1990 U.S. Census and not the subsequent one, while Czechoslovakian ancestry claims rose by 40 percent, or 140,000 people, in 2000.