Definition: Legal process by which a government expels noncitizens from its country

Significance: Deportation power gives the federal government a tool to remove immigrants who enter the United States in violation of immigration law or violate standards of behavior, as outlined in immigration law, after lawful entry into the country. Under U.S. law, deportations are civil proceedings administered by the executive branch of the government. Deportees are generally removed to the country of his or her last legal residence.

By almost any measure, deportation is an enormous federal power. Between 1892 and 2000, the U.S. government used this power to expel more than 40 million immigrants from the country. The federal government first began to build its modern deportation policy with the passage of the Chinese Exclusion Act of 1882.

During the early twenty-first century, deportations continued to be based on the basic deportation powers and policies constructed between the late nineteenth and early twentieth centuries. However, by then, the U.S. government was no longer officially using the term “deportation.” Instead, it processed deportees under two official procedures called “immigrant removals” and “immigrant returns.”

The roots of what would become deportation policy in the United States, however, stretch further back in time. During the colonial period and much of the nineteenth century, European and Euro-American communities expelled vagrants and individuals they thought were unable to support themselves. Residents in towns and villages expelled the migrant poor. There was, however, little distinction made between the nationalities of the poor. Membership in the local community was what mattered. American citizens and immigrants alike could be expelled from an American town if they were not municipal members and became public charges. Some American colonies tried sending expelled criminals or poor immigrants back to England, but it was generally too expensive and inefficient to remove undesirable residents to Europe. Consequently, expulsion was never a widespread practice in America during the colonial period. After 1787, several state constitutions authorized the removal of nonresidents, but this power also languished.

In 1798, the U.S. Congress passed two laws called the Alien Friends Act and the Alien Enemies Act. These laws gave the president of the United States a limited power, based on executive order with judicial enforcement, to expel foreigners from the United States. Some Republicans, including Thomas Jefferson, maintained that this expulsion policy was patently unconstitutional; they thought it represented an attempt by the opposing Federalist Party to remove its political enemies from the country. The constitutionality of the two 1798 laws was never tested, and most sections of the Alien Friends Act expired two years after its passage. Before the U.S. Civil War (1861-1865), there was neither the popular will nor, after the election of the Republicans and the dissolution of the Federalist Party, the political will to legitimize the federal removal of immigrants.

U.S. deportation policy developed in tandem with immigration exclusions and citizenship law during the late nineteenth century. As a part of the Chinese Exclusion Act of 1882, Congress first empowered the federal government to deport immigrants. Like all the sections of Chinese exclusion laws, the deportation provision wrote racism into U.S. immigration policy. In 1892, when Congress passed the Geary Act, it significantly expanded the range of immigrants who could be deported under Chinese exclusion and made deportation policy punitive. With this law, the government put the onus of proving lawful residence on every Chinese person within the United States. The Geary Act required that all Chinese workers apply for certificates of residence, which would prove that they were in the country lawfully. When immigrants were found without these certificates in their possession, the government assumed that they were in the United States unlawfully. The certificate of residence requirement made long-termresidents who entered the country before 1882 deportable.

Over the next twenty years, Congress wrote immigration laws that gave the federal government the power to deport immigrants from all racial and ethnic heritages—beyond Chinese immigrants. General exclusion laws were passed in 1882 and 1883, but it was not until 1891 that the government synced each excludable category with a deportation provision. By 1903, the list of excludable and deportable immigrants included Chinese workers, contract workers (of all ethnicities), anarchists, prostitutes, and all those the government classed as morally or physically unfit. Included in the list of deportable immigrants were categories that are no longer meaningful today, categories such as vagrants, idiots, and imbeciles. 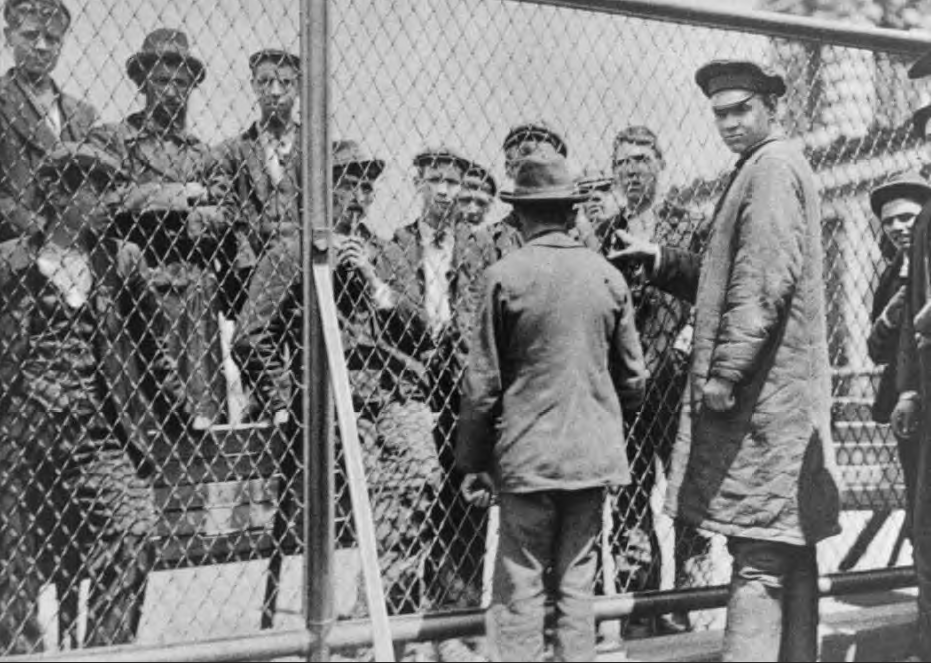 Recently arrived immigrants taking a break in the open-air detention pen atop the main reception center at Ellis Island while awaiting deportation in 1902. (Library of Congress)

The Court’s decision in Fong Yue Ting also dealt with the validity of the process of deportation under the Geary Act. In a decision that distinguished between punishment and protection, the Court upheld the government’s deportation power. Something that was protective of national sovereignty, the Court reasoned, could not also be a punishment. The Court, therefore, legitimated the administrative and judicial structures of deportation under Chinese exclusion, dismissing claims that the hearings and appeals process violated Fourth, Fifth, and Sixteenth Amendment rights. The Fong Yue Ting precedent still stood during the early twenty-first century, upholding the legitimacy of the civil nature of deportations.

The Immigration Act of 1924 created the deportable category of “aliens without proper visas,” and, by the late 1920’s, the Bureau of Immigration was deporting more than half of all deportees under it. Immigrants without proper documentation quickly became the largest class of deportees, above the qualitative provisions included in the immigration laws passed between 1882 and 1920. During the Great Depression of the 1930’s, the government used deportation policy, in cooperation with state and local officials, as a part of Mexican repatriation—the forced removal of one million Mexican and Mexican Americans from the United States to Mexico.

A category particularly important during the pre- and post-1924 periods was that of alien radicals. In 1903, Congress first included alien anarchists in the list of inadmissible classes. In immigration laws passed in 1917 and 1919, it expanded the scope of the antiradical provisions. Unsuccessfully, the Bureau of Immigration tried to deport members of the Industrial Workers of the World in a number of cases in the Pacific Northwest during World War I. Then, in the Palmer raids beginning in 1919, the Bureau of Immigration arrested close to three thousand noncitizens, mostly from Russia. In the end, however, immigration agents deported only about three hundred. A broader use of the antiradical provisions occurred during the Cold War, especially after the passage of the Internal Security Act of 1950 and the Immigration and Nationality Act of 1952. The Supreme Court upheld the expansive antiradical provisions in Harisiades v. Shaughnessy (1952).

In 1965, Congress ended the national origins system, but under the policies that the government built to replace it, deportations continued to increase. In the Immigration Act of 1997, however, Congress and the Immigration and Naturalization Service (INS) stopped using the term “deportation.” In the early twenty-first century, U.S. immigration officials deport immigrants through formal processes, officially called removals, and returns, when immigrants “voluntarily” depart the country after being detained by immigration officials. The Immigration and Customs Enforcement (ICE) in the Department of Homeland Security administers immigrant returns and removals.

Since the 1980’s, one of the largest and most significant categories immigration and customs agents have used to remove immigrants is criminal status. In 2006, for example, the government deported 95,752 immigrants under this category, constituting about 35 percent of all removals. Important laws that expanded the grounds for criminal deportations included the Anti-Drug Abuse Act of 1988 and the Illegal Immigration Reform and Immigrant Responsibility Act of 1996. The majority of immigrants found in violation of immigration law, however, are not processed under the formal removal process. Most leave the country through the return process. In 2006, for example, the government removed 272,389 immigrants and returned 1,043,381.

In the early twenty-first century, removals and returns continue to operate under the administrative process of deportation and the court precedents established during the late nineteenth and early twentieth centuries. Immigrants may hire attorneys to represent them, but they must pay for the costs themselves. The decisions of the removal hearing are not “subject to judicial review” on grounds of fact, but only on procedural grounds. Laws do allow for charging some immigrants with criminal violations, but, as had been the case during the late nineteenth and early twentieth centuries, federal law states that a removal hearing is a civil proceeding. Removals as well as returns continue to be classified as protective of national security, and the government’s power continues to originate from national sovereignty.