Significance: Although the West Indian island nation of the Dominican Republic had a close relationship with the United States through much of the twentieth century, significant Dominican immigration into the United States did not begin until the latter part of the century. By the turn of the twentyfirst century, Dominicans had become one of the fastest-growing immigrant populations and ranked as the fourth-largest Hispanic group in the United States, after Mexicans, Puerto Ricans, and Cubans.

The first West Indian landfall of explorer Christopher Columbus in 1492, the island of Santo Domingo was colonized by Spain. Later, the French took control of the western part of the island, which became the separate nation of Haiti. By enslaving Arawak, Taino, and African peoples, the Spanish and French produced valuable sugar cane, tobacco, indigo, cotton, and coffee crops on the island’s plantations. By the eighteenth century, the island was the most prosperous colony in the West Indies. Modern Dominicans trace their origins to colonial intermixtures of Native Amerindians, Africans, and European settlers.

U.S. Involvement in the Dominican Republic

During the early nineteenth century, Spanish Santo Domingo was almost constantly in upheaval. Between 1805 and 1844, it experienced two Haitian invasions, a popular revolt that led to independence, and a return to Spanish rule. After the country became fully independent in 1844 as the Dominican Republic, it was beset by an ongoing civil war that produced twenty different governments in as many years. Meanwhile, Americans became involved in the island nation when U.S. president Andrew Jackson sought a Caribbean naval base and later, when President Ulysses S. Grant considered annexation. The island’s position along sea-lanes essential to U.S. commerce, its proximity to the proposed Panama Canal, and its emergence as a profitable sugar cane exporter were among its strategic assets. 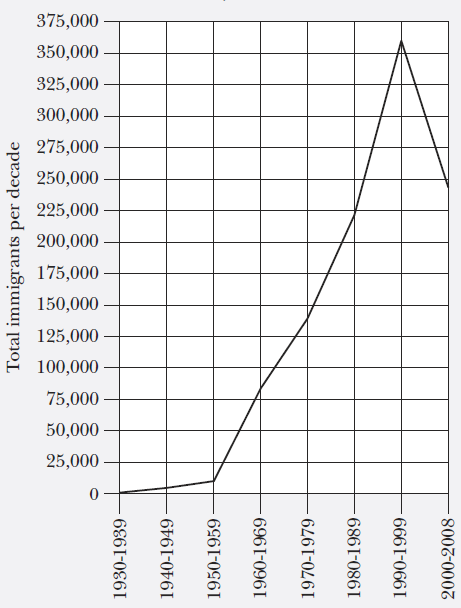 From 1910 through the 1940’s, when U.S. involvement in the Dominican Republic was strongest, a small number of Dominican immigrants entered the United States seeking employment. Most resided in New York City. Much like many other Caribbean migrants, Dominicans typically came to the United States as secondary migrants after first working in Puerto Rico, Cuba, Panama, or elsewhere. Many Dominicans helped build the Panama Canal or did agriculture work in American-ruled Puerto Rico during the early twentieth century, but it is difficult to estimate how many of these people afterward entered the United States. It is, however, known that Harlem became home to thousands of West Indians from the Greater Antilles island group, of which the Dominican Republic is part, during the second decade of the century. Some New York City neighborhoods in Queens trace Dominican settlement to the 1920’s.

A larger wave of Dominican immigration began after 1950. During the 1950’s, 9,987 Dominicans— mostly political exiles—entered the United States legally, an average of 990 per year. During the 1960’s, the total was more than nine times greater when more 93,000 immigrants arrived. After Trujillo’s 1961 assassination and a 1963 coup in which the democratically elected president Juan Bosch was deposed, immigration to the United States averaged 9,330 people per year.

Dominicans began to find entry into the United States more difficult in 1968 when the Immigration and Nationality Act of 1965 put a limit on the number of immigrants permitted from the Western Hemisphere. Nevertheless, Dominican immigration continued to grow during every decade. The peak year was 1994, when 51,221 Dominicans entered the United States. In 2009, the U.S. Office of Immigration Statistics reported that 31,879 Dominican immigrants had obtained permanent resident status during the previous year, when 22,562 (71 percent) of that total were new arrivals. The remaining 9,317 Dominicans received status adjustments during 2008. These figures do not include undocumented Dominican immigrants, whose numbers may be several times greater than official counts of documented immigrants.

Political violence and repressive governmental policies were push factors during theTrujillo years. During the 1960’s, U.S. foreign policy became a pull factor. Fearing the spread of communism from nearby Cuba, the United States invaded the Dominican Republic in 1965, helping to stabilize a pro-Western government, and encouraging increased U.S. immigration in order to quell political differences on the island. Political factors motivated much of the Dominican immigration through the 1970’s, but economic factors became paramount after 1980.

During the 1970’s, the Dominican economy sharply declined. Urban residents desiring middleclass lifestyles were challenged by their homeland’s shortages of well-paying jobs and reliable transportation, water, and electrical services. Meanwhile, inflation and shortages placed even basic groceries out of reach of many Dominicans. From the 1980’s through the first decade of the twenty-first century, most Dominicans who have come to the United States have done so in the hope of finding decent work opportunities and living wages. Some do not intend to stay permanently, hoping instead to save enough money to return home to start new businesses or simply to live more comfortably.

By the end of the twentieth century, a growing number of Dominican Americans were winning fame in the United States. In view of the fact that baseball has become the national sport of the Dominican Republic, it is not surprising that Dominicans have been especially prominent in Major League Baseball in the United States. Among the many star Dominican players are Tony Fernandez, Juan Marichal, Sammy Sosa, Manny Mota, and Felipe, Jesus, and Matty Alou. The oldest of the Alou brothers, Felipe was not only the first prominent Dominican player in the major leagues, he was also later the first Dominican to manage major league clubs. His son, Moisés Alou, has carried on the family tradition in baseball.

A large portion of Dominican immigrants send part of their U.S. earnings to their families in the Dominican Republic. Their remittances have made an important contribution to the Dominican economy. Patricia Pessar’s analysis of a 1981 survey of Dominicans in New York City shows that both male and female Dominican immigrants have worked as semiskilled and unskilled laborers in the manufacturing sector. Many Dominican men worked in the service sector, sometimes as managers and proprietors of small businesses, and as skilled craft and blue-collar workers. Many of the women worked as clerical or domestic workers.

Surveys of Dominican immigrants during the 1980’s indicated that more than half of Dominican immigrants were female and either were married or were divorced heads of households. They also saw a high concentration of female Dominican garment workers. In New York City, a profusion of Dominican small businesses emerged during the 1980’s and 1990’s. These included grocery stores, beauty shops, travel agencies, and small manufacturing plants that did subcontracting work for larger manufacturers. As Dominicans have experienced greater economic success in the United States, many of those who once planned to return to their homeland have decided to remain in the United States, partly in order to be near their American-born children.