Significance: Commercial enterprises constituted the first organized wave of immigration from the Netherlands to North America during the early seventeenth century and led to the founding of Fort Nassau, which was only the second permanent European settlement in North America. Continuing Dutch immigration waves have produced both complete assimilation of the immigrants fromthe Netherlands into North American culture, and also continuing pockets of a persistent hyphenated “Dutch-American” culture.

Three major immigration waves have brought Dutch-speaking people from the Netherlands to North America. During the first third of the seventeenth century, the Dutch West Indies Company sponsored exploring and colonizing voyages to the NewWorld. The second wave, subsequently known as the “Great Migration,” began during the 1840’s, triggered by religious tensions in the homeland. The final wave of Dutch immigration followed the end of World War II, encouraged by the government of the Netherlands in order to help relieve pressing economic problems in the homeland.

The Dutch maritime empire of the early seventeenth century was a global one, with colonies stretching from Asia to Brazil. The explorations of Henry Hudson, who sailed up the river named after him in 1609, was one major participant of this vast commercial expansion. In 1614, the Netherlands States-General granted a charter to found Fort Nassau, which was only the second European settlement in what would become British North America, after British Jamestown. In 1721, the Dutch West Indies Company stock company was founded to promote trade between Europe and North America. During this earliest period, immigrants to North America included the nationals of many countries. Although Henry Hudson himself was an Englishman, he claimed lands in what was to become the United States in the name of his Dutch sponsors. The Pilgrims, too, although they sailed to America from the Netherlands, were English.

Immigrants spread outward from the first trading posts, founding New Amsterdam (later New York City) in 1625. New Amsterdam served as a defensive bulwark that helped keep immigrants from other European countries from settling in the region, and as a center for both trade and warfare with local Native American communities.

It soon became clear that a flow of additional immigrants would be needed to support continued commercial growth. Therefore, beginning in 1629, the Dutch West Indies Company encouraged immigration by offering land purchases along major rivers to investors who were willing to sponsor sizable numbers of immigrants. This so-called patroon system (similar to later padrone systems) of settlement was not successful. Other efforts to attract immigrants followed, such as shipping children from Dutch orphanages across the Atlantic to serve as contract workers in New Netherland. Despite all such efforts, the settlement’s population remained low, which was one reason the British were able to seize the region from the Dutch with relative ease in 1664. The British takeover halted further immigration from the Netherlands. Nevertheless, Dutch language and culture continued to be commonplace in the Hudson and Mohawk River valleys even decades later.

Economic hardships including potato and rye crop failures in the Netherlands during the 1840’s, were among the motivations for the second wave of Dutch immigration to the NewWorld. However, religious tensions in the Netherlands constituted its most significant motive force and resulted in its longest-lasting effects. Immigration was significantly encouraged by a “seceder” movement within the official Dutch Reformed Church in the Netherlands. Starting fairly early during the nineteenth century, some congregations and individuals rejected what they perceived as a liberalization of the Dutch church, a moving away from its deep commitment to Calvinism. The Dutch government responded by attempting to repress the seceder movement by breaking up the movement’s meetings, billeting soldiers in the homes of separatist families, and imposing fines on its pastors. Official state hostility continued until 1848.

In 1834, the Dutch seceders officially broke from the Netherlands state religion. Some of their congregations, led by their pastors, emigrated as groups to the United States during the 1840’s and 1850’s. Many, perhaps most, settled in the Midwest, founding such towns as Oostburg and Holland (now Cedar Grove), in Wisconsin. In Michigan, they settled in the western part of the Lower Peninsula, founding the communities of Holland and Zeeland. Pella, Iowa, is a final example of what became a host of new Dutch immigrant-founded communities. These communities continued many of the traditions of their homeland for generations. Indeed, all the communities discussed here continued to retain traces of their Dutch origins into the twenty-first century. As late as 1990, more than one-third of the citizens of Holland, Michigan, were of Dutch descent. As farmland in the United States grew both less plentiful and more expensive near the end of the nineteenth century, newly arrived Dutch immigrants began to settle in such American cities as Chicago and Grand Rapids.

During their first two waves of immigration, the Dutch brought with them to the New World a strong loyalty to the Dutch Reformed Church, which had its roots in the Reformation of the sixteenth century. In colonial times, some of their New World congregations favored keeping close ties with the church in the Netherlands, but others sought greater independence from their homeland. The latter eventually prevailed. In 1792, the Dutch Reformed Church in the United States became an independent denomination, the Reformed Protestant Dutch Church. Subsequent doctrinal and procedural differences within the newly independent church in North America continued to influence the speed and degree of Dutch assimilation into mainstream American culture.

In 1847, more than seven hundred Dutch seceders settled near a Native American village close to Lake Michigan. No actual fighting erupted between the settlers of what would become the town of Holland, Michigan, and inhabitants of the Native American village, but only two years after the Dutch arrived, the Native Americans moved out of the area, resettling far to the north, never to return. They left because the Dutch settlers had brought smallpox into the region, and because settler-owned livestock trampled their vegetable gardens.

Immigration to Holland, Michigan, from the Netherlands continued throughout the nineteenth century, becoming what was termed the “followers immigration,” so-named because many people were inspired to immigrate by the exchange of personal letters between new settlers and their Old World relatives—an example of chain migration. Members of the followers immigration at first joined their New World relatives but soon spread out to found more than one hundred new towns.

Throughout the mid-nineteenth century, some congregations in the Midwest broke from the newly established Reformed Protestant Dutch Church in America. Members of these congregations regarded themselves as remaining more loyal to the 1834 secession that had encouraged nineteenth century Dutch immigration to America; they saw themselves as more committed to continuing some of the traditions of Calvinism. These tensions led to yet another separation in 1857 that created the Christian Reformed Church. Parallel developments in the old country helped to account for the fact that the new Christian Reformed denomination would attract the majority of Dutch immigrants during the peak years of the second wave of immigration, from 1880 until 1920. The two branches of Dutch Calvinist-based New World church denominations were later joined by two more, the Protestant Reformed Church and the Netherlands Reformed Congregations. 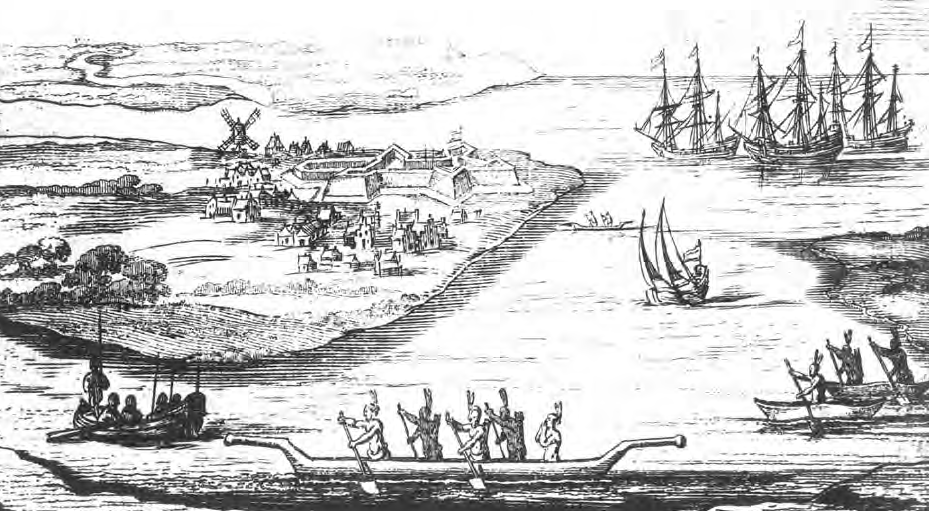 By the early twenty-first century, the Reformed Church in America had adopted such typical American Protestant traits as membership in the National Council of Churches and the World Council of Churches, while the Christian Reformed Church continued to emphasize its loyalty to somewhat more conservative practices. One of its distinguishing characteristics is its emphasis on Christian elementary and secondary schooling, rather than public schooling. Its generally conservative position is also exemplified by the fact that well into the twentieth century, Dutch-owned stores in western Michigan closed on Sundays. Moreover, it was not until 2008 that purchasing beer and wine was legal in Ottawa County, Michigan, the home of Holland and Zeeland.

During the twentieth century, all immigration to the United States was limited by new federal national origin-based quota legislation. Nevertheless, World War II prompted a third and final wave of Dutch arrivals in the United States. Because the population of the Netherlands had suffered so greatly during the war, the Dutch government actively encouraged its own citizens to emigrate. In 1949, it even began offering travel subsidies. At the same time, it successfully. government to exempt Dutch citizens from U.S. immigration quotas.

Dutch immigration to Canada has historically been closely tied to Dutch immigration to the United States.Atrickle of Dutch immigrants began arriving in Canada during the late eighteenth century. Some of the immigrants simply moved north across the U.S. border because they had been Loyalists fighting on the side of the British during the American War of Independence. By the late nineteenth century, much of the farmland in the United States was either unavailable or expensive, while at the same time the Canadian government was offering free or inexpensive land to new immigrants.

The volume of Dutch immigration to Canada rose after the end of World War II. The Dutch and Canadian governments cooperated to encourage this postwar immigration. Canada was having a labor shortage, while there was surplus labor in the Netherlands. Many new arrivals landed in Canada in family groups, sponsored by relatives who were already settled. Strong Dutch-Canadian communities grew around church membership.

Historically, the Dutch in North America have focused on theological rather than political disputes, despite the paradoxical fact that three U.S. presidents are direct descendants of the first wave of Dutch immigrants (Martin Van Buren, Theodore Roosevelt, and Franklin D. Roosevelt). The sole exception to this relative lack of political organizing was an effort of Dutch Americans to support the Afrikaner (Boer) republics against Great Britain during the South African (Boer) War of 1899- 1902. 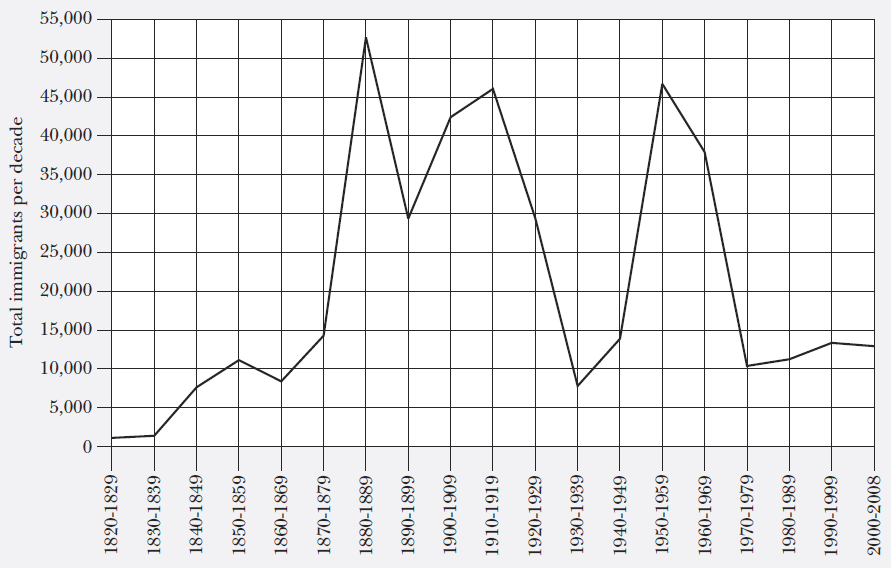 A cohesive subculture has continued to exist among some geographically localized descendants of immigrants fromthe Netherlands. Although the majority of Americans of Dutch extraction have assimilated completely into mainstream Anglo- American culture, some residents of these local communities have preserved and built upon institutions that to a greater or lesser extent relate to the tenets and practices of their Calvinist-inspired religion. A variety of other kinds of ties to the Netherlands continue as well, especially in the form of such tools of communication as newspapers and publishing houses, and even television and radio programming. For example, a western Michigan Public Broadcasting System television station aired a long-running series titled Thinking of Holland. Another kind of continuity is represented by the Dutch Immigrant Society, based in Grand Rapids, Michigan. Familiarly known by its initials as “the DIS,” it operates charter flights to Amsterdam that are filled with Dutch Americans hoping to rediscover their roots or to visit relatives in the homeland.

The term“Hollander” brings to the foreground a rare example of the negative stereotyping of Dutch Americans. In some contexts “Hollander” has the pejorative meaning of “cheapskate” as exemplified in a phrase such as “Dutch treat.” Far more frequently, stereotypes that refer to the Dutch heritage of some North Americans are positive in nature. This positive image manifests in the generalized “Dutchness” animating annual “tulip festivals” scattered across North America. Founded as a way to commemorate Dutch traditions, the festivals have developed into tourist attractions. Pella, Iowa, has its Tulip Time; Baldwin, Wisconsin, has “Let’s Go Dutch Days”; and Woodburn, Oregon, has the “Wooden Shoe Tulip Festival.” Holland, Michigan’s annualTulip Festival was even visited by the Netherlands’ Queen Juliana in 1952 and by Queen Beatrix in 1982.