During the seventeenth and eighteenth centuries, as England was building what would become the British Empire, its leaders were driven by the doctrine of mercantilism. English colonies were to serve as sources of raw materials that would be processed and turned into marketable goods in the home country. The raw materials that North America had to offer, notably tobacco and later cotton, were in high demand in England. It was therefore in England’s interest to encourage production of these and other labor-intensive natural products. It was also in England’s interest to populate its American colonies to meet the consequent labor needs. Immigration was promoted by those whose potential profits required as many settlers as possible.

Some settlers went to the colonies on their own, particularly as the restructuring of English agriculture during the eighteenth century deprived many who lacked title to land in Great Britain of the opportunity to make adequate livings. Those who lacked the capital to make the voyage to America could become indentured servants, paying off the costs of their transportation through several years of contractually bound labor. Indentured servitude was most common in the southern colonies during the seventeenth century. After it became clear that northern Europeans had trouble performing hard physical labor in the South’s hot climate, indentured European servants were replaced by enslaved Africans.

Throughout the British North American colonies, populations grew through high rates of natural increase and immigration of people despairing of ever owning enough land in Britain to support their families. The earliest immigrants settled close to the Atlantic coast, but through the seventeenth and eighteenth centuries, inland regions began to fill up. Meanwhile, increasing numbers of non- English immigrants, especially members of German religious groups such as the Amish sought greater freedom in America. These people brought with them both devotion to their communities and a willingness to work hard to expand their communities’ agricultural output. Many British immigrants dreamed of climbing the social ladder by becoming craftsmen or traders, especially in New England, where the poor agricultural potential of much of the land propelled the most ambitious immigrants into trades.

From the end of the American Revolution in 1783 to the outbreak of World War I in 1914, the population of the United States increased from about 3 million people to around 100 million. Much of that increase was from natural population growth, but as many as 45 million immigrants are believed to have come to the United States during that long period. While spreading out across the landscape from the Atlantic Ocean to the Pacific, immigrants helped to make possible the dynamic economy that characterized the United States at the beginning of the twentieth century.

Most of the early immigrants came from the British Isles, especially the large number of Irish who left in the wake of the potato famine of the late 1840’s. Despite their lack of experience in anything but hard-scrabble farming, many of these immigrants settled in cities, especially New York and Boston. They came during a time when the Industrial Revolution was changing the way economic value was generated, and they and their descendants provided the labor force for the new, massproducing industries. They provided much of the labor for the Erie Canal and for the numerous railroads that began to cross the nation, joining the East and West coasts. 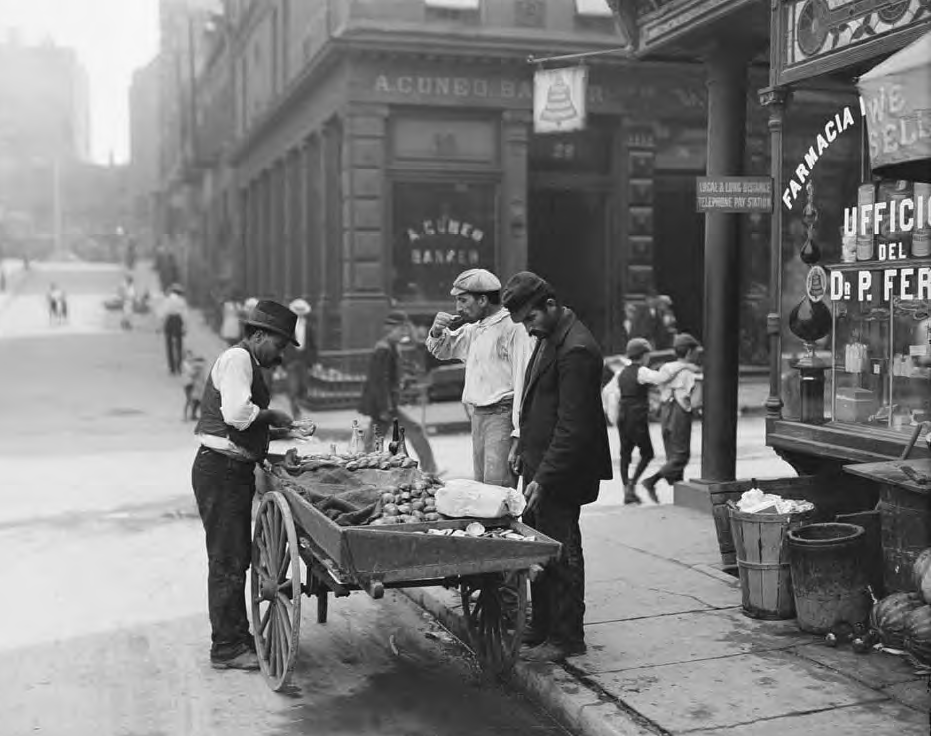 Most new immigrants to the United States hoped to achieve prosperity, but many, such as this early twentieth century Italian clam seller, had to start humbly. (Library of Congress)

As America emerged from being primarily a producer of raw materials to a producer of manufactured goods, immigrants provided the labor force for the new industries. This was particularly true when immigration shifted fromthe farmers of nineteenth century Germany and Scandinavia to the displaced peasants of eastern Europe. Many of the latter wound up in industrial cities, such as Pittsburgh, where the steel industry dominated, and its labor force was predominantly composed of Slavic immigrants. Eastern European immigrants also ran the spinning and weaving machinery in New England’s textile mills.Without this supply of immigrant labor the capitalists behind the nation’s industrial growth would not have been able to achieve what they did.

Despite their central role in American industrialization, new immigrants were not always welcome. The notorious Boston signs proclaiming “No Irish Need Apply” were indicative of the often hostile American attitude toward recent immigrants. Another indication of the unwelcoming attitude of many Americans to immigrants was the apparent indifference of many factory owners to the terrible and often dangerous conditions under which their immigrant employees worked. The lethal fire that killed 146 predominantly immigrant workers in New York City’s Triangle Shirtwaist Factory in 1911 was dramatic proof of that indifference. The large numbers of eastern and southern European immigrants who entered the United States during the decade leading up to World War I was a catalyst for the negative reaction that led to new immigration laws during the 1920’s, which attempted to restrict immigration to the northern Europeans who had dominated the earlier arrivals.

Immigration dropped off markedly during World War I as Europe was convulsed by the conflict. In America, the period and the isolationist culture that it spawned hardened attitudes of the native-born population toward immigrants. In 1924, the U.S. Congress passed an immigration act that for the first time limited the total number of immigrants who could come to the United States. It also limited the countries from which they could come by setting numerical quotas based on the numbers of foreign nationals who had been living in the United States in 1890.

The national origin quotas were finally ended by the Immigration and Nationality Act of 1965. In their place came the concept of “family unification” under which the family members of current citizens were given preference. The 1965 immigration law also for the first time included immigration quotas for those originating in the Western Hemisphere. The law’s sponsors hoped that it would have the same effect as the 1924 national origin restrictions. However, it instead encouraged the immigration of relatives of immigrants already in the United States who had secured citizenship. Later changes to the law authorized admitting more refugees, but these were now coming primarily from Asia rather than Europe. More major changes were introduced in 1986, under the Immigration Reform and Control Act, one of whose most controversial provisions was a system under which illegal immigrants could secure legal status.

By the turn of the twenty-first century, the issue of what sort of immigration policy was appropriate had taken center stage in the United States. The presence of large numbers of illegal immigrants, mostly from Latin America, aroused substantial concern that these people might be taking jobs from native-born Americans. Although it was technically illegal, even under the 1986 law, for employers to hire undocumented immigrants, illegal immigrants provided a substantial supply of labor for industries—the hotel, construction, and building maintenance industries in particular—that had low margins and in which labor costs played crucial roles in profitability.

Defenders of immigrants asserted that many of the jobs they took were jobs Americans shunned. Books appeared supporting both sides of the issue, For example, George Borjas argued in Friends or Strangers: The Impact of Immigrants on the U.S. Economy (1990) that statistical analysis showed that the presence of immigrants, including those illegally in the United States, had a very small negative effect on the wages of American citizens. On the other side, in Mass Immigration and the National Interest: Policy Directions for the New Century (2003), Vernon Briggs, Jr., argued that the presence of perhaps as many as 12 million illegal immigrants had a profound effect on the national economy.

By the first decade of the twenty-first century, so many illegal immigrants were living in the United States that the issue became a matter of national policy. Alan Greenspan, the chairman of the Federal Reserve Board, weighed in on the topic in his testimony in 2003 before a U.S. Senate committee on aging. Immigration was essential, according to Greenspan, to ensure an adequate supply of active workers to support the Social Security System that would otherwise buckle under the weight of all the retired baby boomers by the year 2030.

The issue moved onto center stage in the political contests of the first decade of the twenty-first century. President George W. Bush outlined a fairly elaborate procedure through which undocumented workers, largely fromMexico, could win legal authorization to be in the United States. His plan envisaged vigorous enforcement of the ban on hiring undocumented immigrants and proposed the construction of a fence across parts of the U.S.-Mexican border. However, Bush’s plan failed to secure sufficient support to pass through Congress.

In his memoir, The Age of Turbulence (2007), Alan Greenspan attributes the issue of immigration to the ever-increasing globalization of the economy. He argued that whatever depressive effect immigration had on American wage levels was outweighed by the fact that the United States had become part of a world economy in which labor costs must be determined by the economies of all parts of the world. The important point for the United States, he stressed, was to attract the most skilled workers the world produced and to allow them to work either in the United States or abroad. That approach, he argued, was the true road to economic prosperity in the future.