Definition: Opportunities to find better employment, to own land, and to trade and build businesses that have attracted immigrants to the United States

Significance: Throughout the history of the United States, quests for economic betterment have been a driving force behind the decisions of immigrants to come to the United States. Most immigrants remain permanently after they arrive, but an estimated 30 percent of them eventually return to their original homelands. Most who return do so after saving the amounts of money they have set as their goals.

Before the late eighteenth century American Revolution, the vast majority of immigrants to what became the United States came from the British Isles. Although many of these early immigrants sought new homes in which they would create communities that shared their religious beliefs without government hindrance, they also sought something else that had become difficult to obtain in their homeland: ownership of freehold land—land without overlords. Some immigrants came hoping to become big landlords themselves and profit from producing crops not readily available in England, such as tobacco, for which the climate and soil of colonies such as Virginia were particularly suitable. By the eighteenth century, a new economic motive helped drive immigration: opportunities to prosper from the international trade in which the American colonies were beginning to participate.

Another sizeable contingent of immigrants came involuntarily—Africans imported as slaves. Although they came unwillingly, their labor made possible the development of large landholdings in British North America’s southern colonies, thereby helping many European immigrants to realize their own dreams of becoming agricultural entrepreneurs. Along with these involuntary immigrants were many Europeans who voluntarily endured indentured servitude because they lacked the capital to finance their own transportation to America. Unlike the African slaves, however, their indentures were for only limited periods of time. In some colonies, during the seventeenth century, they were given small freeholds themselves after they had worked off their indentures.

By the time of the American Revolution, the lands up and down the eastern seaboard, between Massachusetts and Georgia, had become well settled, and a more diverse society was beginning to develop. The first cities to emerge were nearly all seaports, which offered many economic opportunities for employment and trade. Colonial society was then still overwhelmingly made up of people earning their livings from cultivating the land, but it also included many people who made their livings by providing services to the urban dwellers that were needed to support international trade.

U.S. Census records of immigration into the United States began in 1820, but estimates from the years between the Revolution and about 1815 show that immigration was slowing down. However, it accelerated during the 1820’s and continued until the U.S. Civil War began in 1861. The acquisition from Great Britain of most of the land between the Appalachian Mountains and the Mississippi River meant that the United States had a vast, undeveloped region that would be open to agriculture. After most of the Native American peoples were driven out, the land was largely unoccupied and began attracting settlers from coastal areas eager to buy superior farming land from the federal government cheaply. It also opened up land for new waves of immigrants from Europe.

The first great wave of immigrants to come were the Irish, most of whom were young men who were coming to work. One of the first great projects to employ Irish immigrants was NewYork State’s Erie Canal, on which construction began in 1817. By the 1820’s, the majority of Erie Canal workers were Irish, many of whom were saving money to purchase their own land so they could become independent farmers. Some succeeded, but the vast majority did not, instead remaining wage laborers in the numerous small businesses that were emerging around the canal.

Most of the Irish immigrants, particularly those who came during the time of the Great Irish Famine of the late 1840’s, eventually settled in the growing cities. Not a few found work in the textile mills that emerged first in New England. Indeed, the mills drew heavily on Irish immigrants after they began by recruiting local farm girls as their first employees. The Irish proved to be a relatively reliable source of unskilled and semiskilled labor. 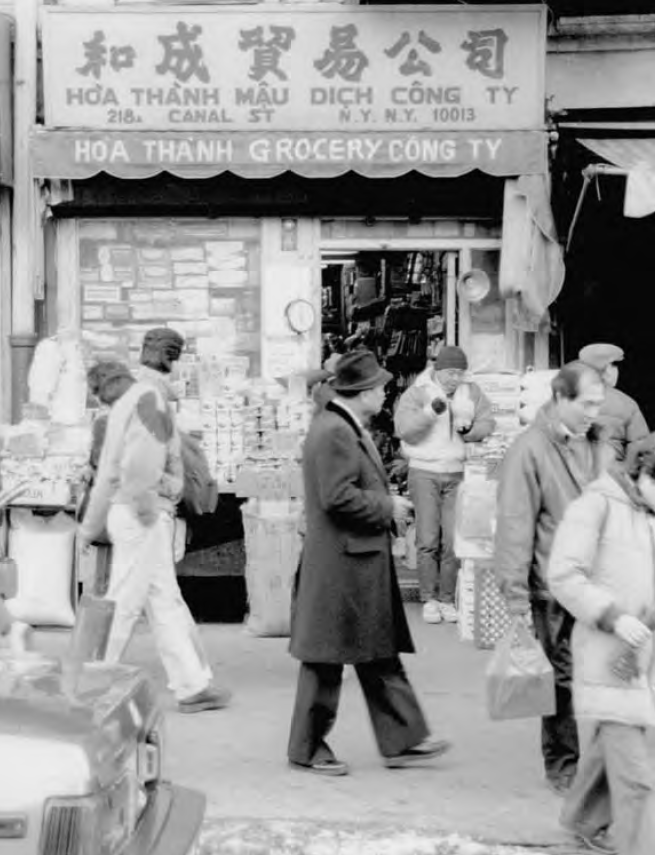 Meanwhile, changing economic developments in Europe impelled people fromother countries to emigrate. Many European farmers were becoming unable to make their livings from the ever smaller plots of land that members of each succeeding generation inherited. Moreover, it was becoming increasingly difficult for them to supplement their meager farm income with seasonal labor in the form of handwork as spinners and weavers. Emigration to go to America offered the hope of finding opportunities while none existed at home. Significant numbers of farmers left peasant villages in southwestern Germany and traveled to America. Many of them settled in the midwestern states of the Old Northwest—Ohio, Indiana, Illinois, Michigan and Wisconsin. Like the Irish, they tended to congregate in communities made up primarily of fellow European immigrants, giving their neighborhoods a distinctively German character.

The U.S. Civil War put a temporary brake on immigration, but after it ended in 1865, the flood of immigration resumed. Rapidly developing industrialization saw the expansion of railroads, the building of large steel plants, and the exploitation of coal mines on unprecedented scales. All these and other developments drew great numbers of Europeans to the United States. Among the new immigrants were many Norwegians who, like the Germans, sought to exploit the agricultural lands of the Midwest and gave Minnesota and the rest of the Upper Midwest its heavily Scandinavian character. Other immigrants were beginning to come from eastern Europe, where the creation of large agricultural estates was diminishing opportunities for peasants to acquire land for themselves. This wave of immigrants peaked in 1907, a year during which more than six million new immigrants entered the United States.

A major technological development that contributed to the increased flow of immigrants was the shift from sailing vessels to steam-powered ships. Prior to the CivilWar, the overwhelming majority of immigrants crossed the Atlantic Ocean in sailing vessels, but this changed shortly after the war, making oceanic travel faster, cheaper, safer, and more comfortable. Europeans willing to travel in steerage class could cross the Atlantic for as little as twenty-five dollars. Companies that owned the steamships drummed up business by actively recruiting people in Europe to go to America.

During this same period, the ethnic mix of immigrants was changing. By this time, Italians, Poles, Greeks, Slavs from the Balkans, and, in particular, large numbers of Jews from eastern Europe were making up the bulk of immigrants to the United States. As with the Irish before the war, members of each of these groups tended to cluster together in ethnic enclaves in the cities and towns where most of them settled. It was not uncommon for American employers seeking workers to contract with members of these communities to get them to pass the word to their fellow countrymen in their homelands that jobs were available.

The outbreak of World War I in 1914 put a stop to the great flood of immigration. Meanwhile, however, that flood had engendered a backlash among many native-born Americans. Aside from laws specifically prohibiting Chinese immigrants on the West Coast, the first comprehensive immigration legislation was passed in 1891. This law created the Bureau of Immigration within the Department of the Treasury and sought to prohibit immigrants that suffered from disabilities. It was only after World War I, however, that group restrictions were imposed to discourage immigration from countries other than those of western and northern Europe. A major exception was made for Mexican agricultural workers, who were brought into the United States on a season basis under the bracero program begun in 1943. It was never intended that these workers would stay permanently in the United States, and they were carefully policed and returned to Mexico at the end of their contractual periods. In addition, the lack of employment opportunities during the Great Depression years of the 1930’s ensured that few would want to come.

Federal rules governing U.S. immigration changed dramatically after passage of the federal Immigration and Nationality Act of 1965, Under the new rules, family unification became a primary goal, and most new immigrants came from countries in the Western Hemisphere, particularly those in Latin America. During the 1970’s, substantial numbers of Vietnamese and other Asians began immigrating. With this next ethnic mix, the traditional emphasis on assimilation was somewhat modified, partly because members of second and later generations of earlier immigrants had shown that members of immigrant families gradually abandon the cultures from which they originate. Greater tolerance was now shown for immigrants who retained their old cultures, so long as they also learned to speak English.

The latest waves of immigrants, however, have tended to remain longer in low-wage jobs requiring only limited skills. Nevertheless, controversies have arisen during periods of economic downturns as some people have argued that immigrant workers are depriving American citizens of industrial jobs. Meanwhile, another controversy over the “off-shoring” of manufacturing jobs to Latin America and Asia has arisen, and this, too, has cooled down the welcoming of new immigrants.