Significance: Ecuadorians constitute the eighth-largest Latino group in the United States, according to the 2000 U.S. Census. About 70 percent of the 600,000 Ecuadorians counted in the census live in the New York City metropolitan area. Many are undocumented workers.

Most Ecuadorians living in the U.S. are economic refugees. During the 1960’s and 1970’s, small numbers of Ecuadorians began entering the U.S. on tourist and work visas. Many of these early migrants intended to return to Ecuador after spending a year or two earning money. However, after passage of the Immigration Reform and Control Act in 1986 conferred legal status on undocumented migrants, many of these immigrants decided to obtain U.S. citizenship and remain.

After several decades of fairly slow immigration, the numbers of Ecuadorian immigrants to the United States jumped dramatically during the 1990’s. A drop in Ecuadorian petroleum revenue combined with a 60 percent inflation rate to devalue the Ecuadorian currency, the sucre, leaving many Ecuadorian families impoverished. To survive, many families sent young members—typically young men—to the United States to earn U.S. dollars. Many of these families have made ends meet only because of the remittances sent by their relatives in the United States. Moreover, the Ecuadorian financial crisis made it impossible for many young Ecuadorianmento obtain the prerequisites for manhood—land ownership, marriage, and the establishment of independent households—within their homeland. Migration to the United States has provided young immigrants with both incomes and the status of acquiring North American styles of speech, fashion, and attitude. 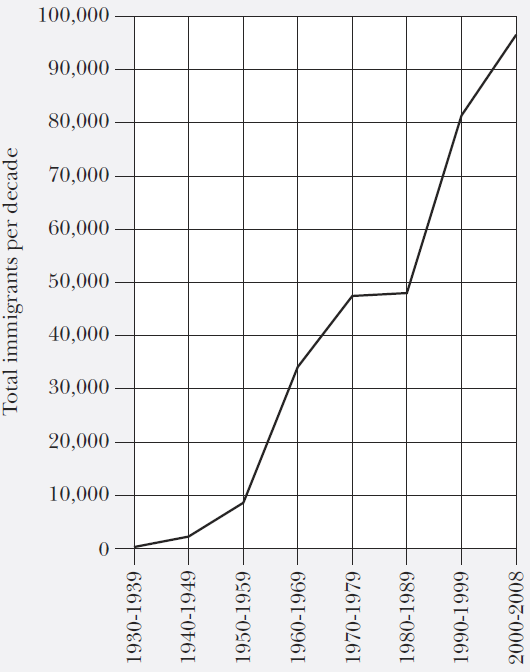 The Ecuadorians in the United States include a disproportionately large number of undocumented workers. Most of them are poor peasants with limited resources, who come from Ecuador’s Azuay-Canari region in the rural Andes. Many work in the low-paying, unskilled service and manufacturing sectors of the New York City economy, particularly in restaurants and the garment industry. One scholar estimates that 95 percent of Ecuadorian garment workers are paid in cash, with no deductions taken out. Eighty percent of these workers are identified as undocumented, with little job security.