Ellis Island was once the site of the nation’s busiest immigrant processing center. Called Kioshk, or Gull Island, by the Indians, the island was renamed Oyster Island when the Dutch acquired the property in the 1630’s. During the British colonial period, it went by the names Dyre’s Island, Bucking Island, Anderson’s Island, and Gibbet Island. Manhattan merchant Samuel Ellis held title to the land during the American Revolution, and his heirs sold what became known as Ellis Island to New York State in 1808. Later that same year, the property was acquired by the federal government. Originally 3.3 acres, the island was expanded to 27.5 acres mostly by landfill fromballast removed fromships. Though the federal government maintains control over the island, a long-standing dispute between New Jersey and New York was finally resolved in 1998, when the two states agreed to share jurisdiction.

Before 1890, when the federal government assumed responsibility for immigration control and designated Ellis Island as the first federal immigrant processing station, individual states were responsible for processing immigrants. Until that year, Castle Garden, located in Battery Park at the southern tip of Manhattan, served as the immigration absorption center for New York. Between 1855 and 1890, more than 8 million immigrants, mostly fromnorthernand westernEurope, passed through Castle Garden.

On January 1, 1892, Annie Moore, a fifteen-yearold fromIreland, became the first immigrant registered at Ellis Island, which was larger and more isolated than the cramped Castle Garden. By the time the facility ceased operations, on November 12, 1954, it had processed more than 12 million immigrants from a wide range of origins, including southern and eastern Europe. During 1907, its peak year, 1,004,756 immigrants passed through the island. The highest volume recorded for any single day was 11,747, on April 17, 1907.

Although the United States also maintained immigration stations in Boston, Philadelphia, New Orleans, Galveston, San Francisco, and elsewhere, Ellis Island was by far the busiest. During a period of unprecedented dislocation, it was a barometer of the massive immigration from Europe that was transforming American culture.

The majestic Statue of Liberty was the first inspiring sight that greeted most ship passengers arriving in New York Harbor at the conclusion of a long voyage across the Atlantic. Half a mile north, however, most immigrants were soon forced to disembark at Ellis Island, which for some was the only piece of American soil on which they were able to set foot. Would-be immigrants were screened on Ellis Island, and during the course of the immigration station’s existence, approximately 2 percent of passengers were denied admission into the United States. Since it was assumed that passengers arriving in first- and second-class accommodations had sufficient resources to avoid becoming public charges, they were provided the courtesy of a brief shipboard inspection. However, those with medical or legal problems were forced, along with thirdclass and steerage passengers, to get off at Ellis Island and submit to a series of mental and physical tests designed to screen out undesirables.

Inspectors were particularly vigilant about preventing the spread of tuberculosis. Those who were determined to be seriously ill or insane or who possessed criminal records were deemed unworthy to enter the United States. For those who had endured at least a month at sea within the miserable confines of steerage only to be forced to return from whence they came, the famous immigration station earned its popular nicknames “Island of Tears” and “Heartbreak Island.” During the island’s history, thirty-five hundred immigrants died in its hospital facilities. 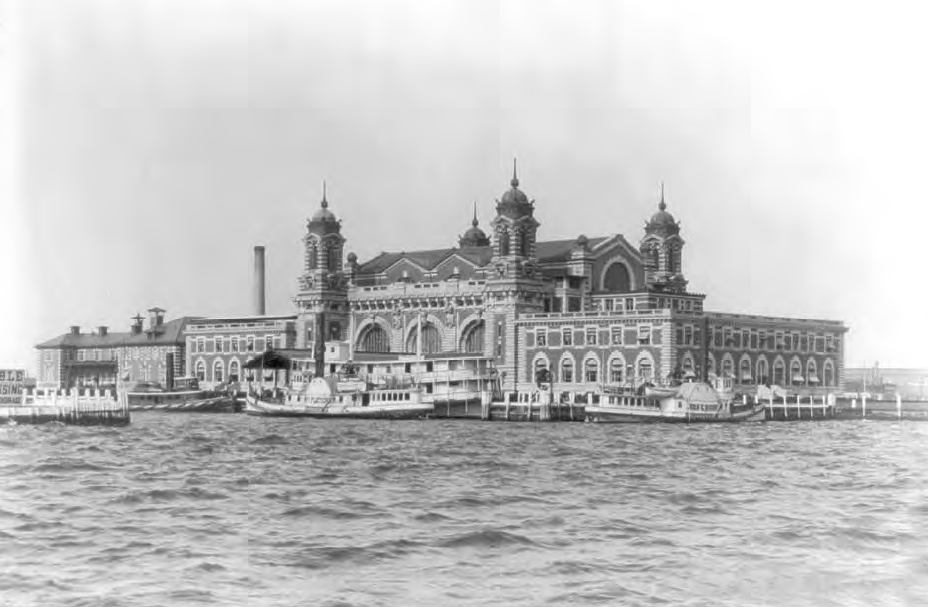 View of Ellis Island reception center seen by arriving immigrants during the first decade of the twentieth century. (Library of Congress)

Agents of the United States Public Health Service and the Bureau of Immigration carried out inspections, which took place in the Registry Room (also known as the Great Hall) and usually lasted three to five hours. The total time required to process a new arrival was usually one to three days. Dormitories and dining halls were built to accommodate the newcomers during their stay on Ellis Island. Legend has it that, either deliberately or through misunderstanding, Ellis Island officials Americanized many quaint foreign names. However, hundreds of translators were on hand to facilitate communication, and officials simply copied information from the questionnaires that passengers had filled out themselves during embarkation.

During World War I, the volume of immigration to the United States decreased, and Ellis Island was used to intern suspected enemy aliens. The restrictive Immigration Act of 1924 reduced traffic through the processing center to a trickle. During World War II, seven thousand German, Italian, and Japanese nationals, classified as enemy aliens, were detained on Ellis Island, which was also used as a training base for the U.S. Coast Guard. In 1954, a Norwegian sailor named Arne Peterssen became the last immigrant processed through the immigration station, and the island ceased its operations.