Carlos Bulosan, a Filipino migrant worker, emerged as one of America’s most respected writers and labor activists during the 1940s. Although he was disillusioned later in life, his novels reflect the optimism of immigrant opportunity in the United States.
Bulosan emigrated from Luzon Island in the Philippines in 1930. Having had considerable contact with Americans and having heard favorable reports from relatives and friends, he traveled to Seattle, Washington, where poverty forced him to sell his services to a labor contractor, who put him to work in the Alaskan canneries. From the dangerous first season in the canneries through a variety of low-wage agricultural jobs in Washington, California, Idaho, Montana, and Oregon, Bulosan learned firsthand the deceptiveness of the “American dream.” Not only were jobs hard to find during the depression, but racial prejudice was common. Riding boxcars across the West, he witnessed the plight of African Americans, Chinese, Jews, and fellow Filipinos, who along with poor whites were struggling to make ends meet with dignity. Bulosan nevertheless met with many acts of kindness by ordinary Americans and marveled at the moral complexity of the country: “America is not a land of one race or one class of men,” he wrote. “We are all Americans that have toiled and suffered and known oppression and defeat, from the first Indian that offered peace in Manhattan to the last Filipino pea pickers.” 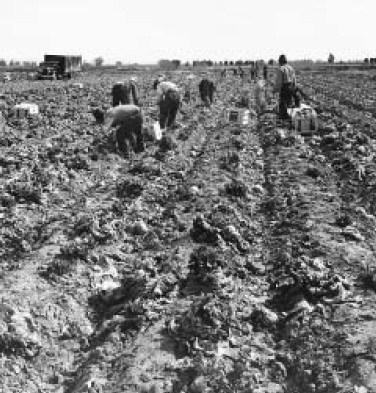 Filipino agricultural laborers in a lettuce field in the Imperial Valley, California, 1939. Having come to the United States as a laborer in 1930, Carlos Bulosan became an important labor leader in the 1940s. By the 1980s, Filipinos were second only to the Chinese in overall numbers of Asian immigrants. (Photo By Dorothea Lange/Library of Congress Prints & Photographs Division)
Determined to give his people a voice and to help immigrants cope with their difficulties, Bulosan expressed his experience in stories and poems. In 1934, he established the radical magazine The New Tide and became active in labor politics. He also published in mainstream magazines such as the New Yorker and Harper’s Bazaar. In 1950, he became editor of the highly politicized yearbook of the United Cannery and Packing House Workers of America. At the time of his death from tuberculosis in 1956, he was little known, but Filipino immigrants of the 1960s and 1970s revived interest in his life and work. Bulosan is best remembered for three semiautobiographical World War II–era works dealing with the paradox of American attitudes toward Asian immigrants: The Voice of Bataan (1943), The Laughter of My Father (1944), and America Is in the Heart (1946). The 1973 republication of the latter novel led to its widespread use in college classrooms and a greater appreciation for Bulosan.
See also Filipino immigration.