English as a second language

Definition: Language-instruction programs for young learners and adults whose native languages are not English

Significance: As an instructional tool to help language-minority students develop English-language skills, the English as a second language program came into popular usage during the late 1950’s. It is the most common language education program used by American schools to facilitate the integration of limited- or non-English-speaking students into mainstream general education. For adult second-language learners, ESL education helps the individual to enhance his or her opportunities for employment in the English-speaking workplace.

English-language education for non-English speakers has gone through various phases of development since the early twentieth century. English-only requirements as an integral aspect of the national movement to Americanize all non-English-speaking immigrants proved ineffective in helping languageminority children acquire the necessary English literacy skills to succeed in school. Since the early ESL programs of the late 1950’s, many changes have occurred in the methods of English-language education to accommodate the various needs of immigrant and U.S.-born second-language learners. Although ESL teaching techniques vary, the programs’ primary aim is the same: to help students develop knowledge and skills in the four major domains of the language—listening, speaking, reading, and writing.

At the turn of the twentieth century, in the midst of one of the largest waves of immigration into the United States, mainly from southern and eastern Europe, President Theodore Roosevelt urged that all newcomers learn English: “We should provide for every immigrant . . . the chance to learn English; and if after say five years he has not learned English, he should be sent back to the land from whence he came.” The national push for the rapid assimilation into American culture of all non- English-speaking populations, as reflected in President Roosevelt’s proclamation, provided the catalyst for the enactment of laws by state legislative bodies requiring English as the sole language of communication in both government affairs and education. This further spurred the growth of special curricula to help U.S.-born and immigrant language- minority children learn English. In many cases, educators in Indian Boarding Schools and in the segregated Mexican schools of the Southwest and other school settings applied these laws with so much force that students who were caught speaking their mother tongues were punished, sometimes physically, and parents admonished for not encouraging their children to speak English.

Lacking in a solid theoretical base and knowledge of how first languages are learned, much less the processes of second-language development, the initial English-language education programs for limited- or non-English-speaking children had to rely in both content and methodology on the traditional English-language arts curriculum designed for native English speakers. The coercive “sink or swim” aspect of the nascent programs further deterred many of the language-minority children from effectively learning English and achieving in school. The process was analogous to trying to fit a square peg into a round hole. 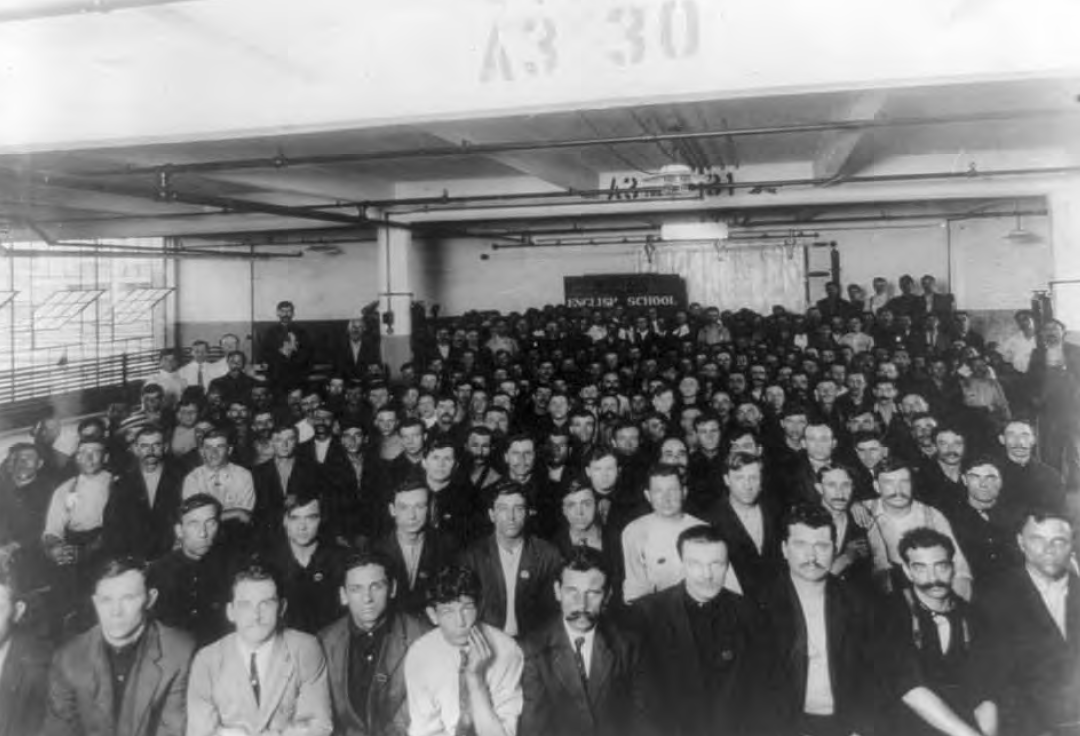 Immigrants in a U.S. Department of Labor English class in a Ford Motor Company factory in Detroit, Michigan, during the early twentieth century. (Library of Congress)

The foreign language programs in the secondary schools and colleges established the effectiveness of the audio-lingual technique in teaching French, German, Spanish, and other world languages to English speakers learning a second language. These foreign language programs, as well as the ESL audio-lingual programs implemented during the late 1950’s and early 1960’s, were influenced by advances in the fields of structured linguistics and behavioral psychology.

The initial ESL programs evolved from the premise that language is habit-forming. Based on the theory, it was further believed that through the use of various forms of student repetition of structured language patterns modeled by the teacher, second-language learners would eventually internalize the receptive and speaking skills of English as a fundamental first step to learning how to read and write in the same language. The rigid curriculum of the ESL programs found some degree of success with adult learners, who were more motivated than young learners, to develop the language. These more mature learners realized that the ability to speak English was crucial to their success in the workplace. The constant drilling and repetition exercises associated with the audio-lingual approach was less appealing for elementary and secondary school second-language learners.

The inadequacy of the audio-lingual programs, as well as the growth in the enrollment of a new generation of English-language learners different in many ways from those immigrant and nonimmigrant populations served by the earlier models of ESL, has resulted in the expansion of Englishlanguage education. These new programs offer many instructional options to accommodate the varied needs of the learners. Recent immigrant students, for example, and the large number of firstgeneration immigrant students present distinctive challenges to educators based on the learners’ differing levels of English proficiency and prior education. Recent immigrant students with previous schooling in their home countries have greater ease in learning English and possess the basic knowledge and skills to cope with the academic demands of American schools.

Children and adolescents who are new arrivals without previous formal education present the greatest challenge. These students do not have the cognitive/academic skills underlying literacy in their first language, much less English. Even children who come to the United States as young children or are born in this country of parents who are poor and illiterate experience adjustment and learning difficulties in school. Children born in the United States of immigrant parents (also first-generation immigrant students) may be more fluent in English than in their heritage (home) language, or they may be more proficient in their native language than in English. Some of these first-generation immigrant students may even be balanced bilinguals, meaning they have equal proficiency in the heritage language and English.

The more modern programs of ESL attempt to respond to the myriad, complex needs and characteristics of recent arrivals as well as first-generation immigrant students, including refugee and undocumented children. The curriculum requirements and learning expectations of the ESL programs are also influenced by federal and state legislative and judicial mandates designed to promote fair and equitable treatment for ethnic minority students. These mandates include those promulgated by the No Child Left Behind Act of 2001, state school reform requirements, and Supreme Court decisions such as the Lau v. Nichols (1974) and Plyler v. Doe (1982). Studies in the field of psycholinguistics, along with the legislative and judicial requirements, support planning and delivery of ESL education in less stressful and more flexible learning environments planned in accordance with the Englishlanguage proficiency level of each learner. The programs provide for more varied opportunities for meaningful participation by students than in earlier models of ESL. These programs are also intended to reduce the influence of factors that create stress for students and obstruct their success in school, including cultural incompatibilities, poverty, fear of deportation, and traumatic conditions associated with the refugee experience.

One type of ESL education is provided in the Newcomer Centers that originated in California schools. The Newcomer (or Welcome) Center is a school-within-a-school-type program for recent immigrant students. These centers typically operate in middle and high schools, preparing new arrivals for transition to mainstream education. Englishlanguage development is provided within class environments that are nurturing and supportive of language and cultural diversity.

For language-minority children in elementary grades, ESL teachers immerse the learners in a variety of English-language activities. These are ageappropriate and allow the learners to progress through various stages of English production similar to first-language development processes: for example, nonverbal responses, one-word utterances, and finally more complete and meaningful production of language. Further support to ESL is offered by teachers of science, mathematics, social studies, reading, and other subjects taught at all grade levels of elementary and secondary schools. These content-area teachers incorporate ESL techniques in their instruction, allowing for second-language learners (especially intermediate and advanced ESL students) to develop English-language skills while learning subject matter. The push toward greater accountability in schools and standardsdriven education has accelerated the need for immigrant students to develop English sooner and more efficiently without sacrificing the requirements of the curriculum designed for all learners.