Definition: Efforts by federal and state governments, lobbyists, organizations, or private citizens to make English the “only” or “official” language for use in public or governmental situations in the United States

Significance: Although some Americans see these movements as patriotic or wellintended, other Americans perceive such efforts to be anti-immigrant or racist. These movements tend to experience their greatest popularity during times of economic hardship, massive immigration, or war. At the same time, they represent a desire by members of the English-speaking majority in the United States to create national cohesiveness under the banner of the English language.

Although sentiments against non-Englishspeaking residents in America can be found in the words of the English colonists and the nation’s first political leaders, the history of English-only movements in the United States can be traced back to the nineteenth century in California. The 1849 California constitution called for the publication of the future state’s laws in both English and Spanish, yet by 1855 English became the official language in the state’s schools. When the state constitution was rewritten a generation later, all governmental proceedings were ordered to be held and recorded in English only.

German immigrants, who settled in the Midwest during the late nineteenth century, spoke German in their homes, churches, and public places. In some regions, public schools taught classes in both English and German, while in other regions only private schools that were usually run by churches did so. Nativist and anti-Roman Catholic elements opposed the use of German in public places. During the late 1880’s, laws requiring instruction solely in English in both public and private schools were enacted in Illinois and Wisconsin.

As the U.S. economy expanded and immigrant workers flowed into the United States during the early years of the twentieth century, the Englishonly movement grew. Funded by businessmen who feared possible revolutionary violence among newly arrived immigrants, the movement ranged from the benign efforts of the Young Men’s Christian Association (YMCA) teaching English to workers in the evenings to the more aggressive drives undertaken by the “Americanization” campaign led by the anticommunist National Americanization Committee.

After the Spanish-American War (1898), English was made the official language of public education in the newly acquired colonies, Puerto Rico and the Philippines. Attempts to prohibit the teaching of Japanese, Chinese, and Korean in private schools in California and Hawaii were voided by the Ninth Circuit Court of Appeals in 1926. Anti- German-language sentiment continued through World War II; in addition, legislation prohibiting public use of the Japanese language was enacted in response to public demand.

From 1981 until 1990, more immigrants arrived in the United States than in any other ten-year period since the decade that began in 1901. Movements scapegoating immigrant groups began to experience a renaissance. One organization, called U.S. English, was founded in 1983 by Senator S. I. Hayakawa of California and Dr. John Tanton, a Michigan ophthalmologist, environmentalist, and population-control activist. Within four years of the organization’s founding, proposals designating English as the official language of the United States were considered by forty-eight of the fifty states. Voters passed several English-only measures, and numerous legislatures followed suit. 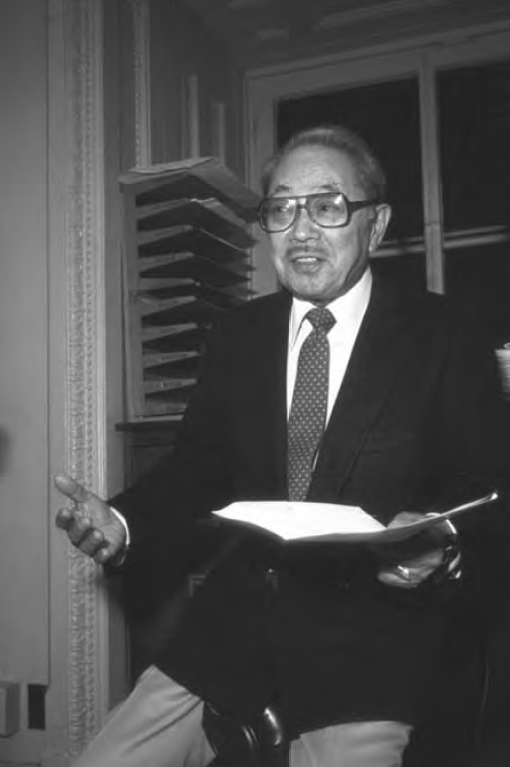 California senator S. I. Hayakawa in 1981.ACanadian immigrant of Japanese heritage and a former educator, Hayakawa was one of the leading proponents of making English the official language of the United States. (Time & Life Pictures/Getty Images)

In 1986, a memorandum written by Tanton containing derogatory remarks regarding Latinos was made public. In response, retired CBS newsman Walter Cronkite and political columnist Linda Chavez resigned from the organization’s board. That year, two other organizations, English First and the American Ethnic Coalition, were formed by Larry Pratt and Lou Zaeske, respectively. In a blow to the movement, U.S. district judge Paul Rosenblatt struck down Arizona’s Official English amendment in 1990 as unconstitutional, ruling that it violated free speech guarantees under the First Amendment. During the legislative session of the 103d Congress (1993-1995), no fewer than four bills were introduced that would have made English the official language of the United States.