Significance: After passage of the 1965 Immigration and Nationality Act, Ethiopians became the third-largest national group of African immigrants to immigrate to the United States. Most arrived in the United States after Congress passed the Refugee Act of 1980.

Ethiopia and its people have long held a special meaning in America. Once known as Abyssinia, Ethiopia stood for black pride and black independence as far back as the 1760’s. Already possessing strong biblical associations, the name “Ethiopia” became an iconic symbol of African independence throughout Europe’s twentieth century colonization of Africa. Some educated African American slaves such as the poets Phillis Wheatley and Jupiter Hammon occasionally identified themselves as “Ethiopians” during the era of the American Revolution. The tendency of black intellectuals to describe themselves as “Ethiopians” stems from the European custom—derived from biblical usage—of applying “Ethiopian” to all peoples from the African interior. This usage, which dates back to the ancient Greeks, can make it difficult to separate immigrants from the actual Northeast African nation of Ethiopia fromthe masses of African Americans.

The first Ethiopian immigrants to reach North America probably arrived as slaves sometime during the seventeenth century. However, the bulk of voluntary immigrants to the United States came after 1974, when a repressive regime toppled the ancient monarchy and took control of the Ethiopian government. The ensuing exodus from Ethiopia, a landlocked nation on the northeastern Horn of Africa, resulted from political turmoil as well as famine and drought. Many refugees fled initially to settlement camps in the neighboring Sudan before moving on to the United States. Impoverished, the Sudan offered few economic opportunities, while the United States held out the hope of a prosperous future.Until Somalis surpassed them in 1994, Ethiopians were the largest group of Africans to immigrate under the provisions of the Refugee Act of 1980. 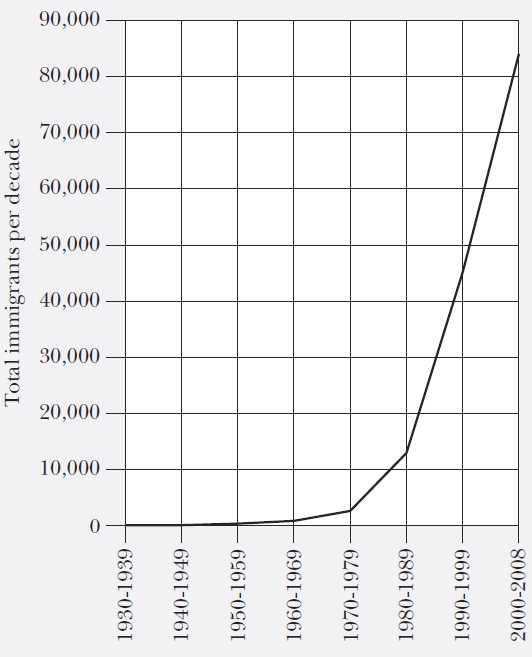 Ethiopian immigrants to the United States have differed from many other immigrant ethnic groups in that they typically arrived with a basic command of British English and tended to settle in disparate neighborhoods, instead of gathering in ethnic enclaves. The consequent lack of cohesive immigrant communities has complicated their efforts to maintain language and cultural ties to their homeland. Also, racism has been a new experience, with many exposed to the color line for the first time in the United States.

Most Ethiopian immigrants are Coptic Christians and Muslims, and their religions have served as sources of comfort in the New World, with churches and mosques serving as community centers, health centers, and social services providers. During the early twenty-first century, the population of Ethiopia was almost evenly divided between Christians and Muslims, a split that is reflected among the immigrants to America. Ethiopia has also long had a significant Jewish population, but most of its Jews emigrated to Israel, while the bulk of other refugees fled to the United States. Ethiopians in America have subsequently established the Ethiopian Orthodox churches as well as the Bilal Ethiopian mosques.