The Events: Series of similarly motivated nationalist uprisings and full-scale revolutions that swept through central Europe, at the conclusion of which many participants and supporters emigrated to the United States

Significance: Europe’s revolutions of 1848 did not fulfill their goals for most participants and, as a result, many participants and supporters felt that the future in their European homelands was particularly bleak. This sense of disillusionment, along with fear of persecution for their actions during the uprisings, led many to leave Europe in search of a better political environment. A majority of them chose to emigrate to go to the United States.

During the 1840’s, Europe was swept up in a whirlwind of political and social turmoil. Among the forces leading to this development liberalism, frustrated nationalism egged on by the Romantic movement, the tensions of burgeoning industrialism, and an agricultural revolution. The popular uprisings challenged the conservative order of Europe, characterized by monarchical-autocratic governments, hierarchical society, and aversion to ethnic determinism.

The years directly following the 1815 Congress of Vienna, which settled the Napoleonic Wars, saw a series of liberal and national outbreaks against the restored governments across Europe. In every instance the chief architect of the peace settlement, Klemens von Metternich, and his allies were able to put down the insurrections and restore conservative rule. However, nothing was done to alleviate the fundamental pressures that had created those disturbances, and they continued to grow until 1848. These forces were many, and an economic depression that began in 1846 and got steadily worse over the next two years combined with the dislocations caused by the ongoing agricultural and Industrial Revolutions, increased demands for ethnic determinism, and the strong rise of liberalism.

The traditional home to European revolution, Paris, lit the match of revolutionary fire in February, 1848. An uprising ousted the monarchy of Louis Philippe and created the Second French Republic, which adopted universal manhood suffrage and a guarantee of the right to work. This success set off a chain reaction of revolution throughout Europe. Insurrections broke out in the major European cities of Vienna, Milan, Berlin, and Budapest and throughout the Habsburg Empire and in the numerous Italian and German states.

There were minor differences among the revolutionary movements in the various countries, as each uprising had its own local concerns. However, their general patterns were essentially the same. During the spring of 1848, the revolutionary cause was going well throughout Europe. A republic replaced the monarchy in France, rulers in the Italian and German states as well as the Habsburg emperor were forced either to abdicate or to grant liberal constitutions, and the Italian and Germanic states found themselves on the path to unification. Within the multiethnic Habsburg Empire, many ethnic groups, most notably the Magyars and the Czechs, were given autonomy. This series of revolutionary successes appeared to have broken the hold of conservative Europe and appeared poised to begin a new chapter in European history. 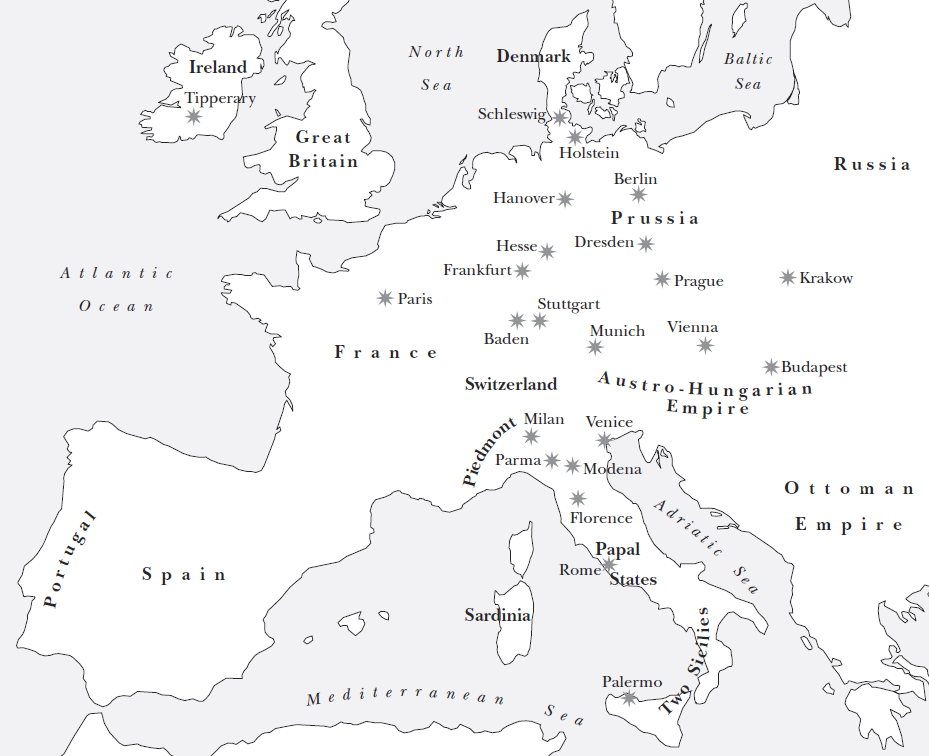 During the summer, however, the political inexperience of the revolutions’ leaders became apparent as each movement went through a series of internal crises. The divisions between the leaders of liberal and nationalist causes led to clashes among the social classes. These were most evident in the bloody street fighting in Paris in what became known as the June Days. Bitter jealousy among leaders in the Italian states weakened their military campaign against Italy’s Austrian rulers. In the German states, delegates to the Frankfurt Assembly wasted precious time arguing about boundaries and minute details of the Germany they hoped to create. While all this infighting was dividing the revolutionaries and sapping their strength, the conservative powers were recovering their strength and regaining their authority. Most liberal reforms that had been granted were rescinded, and military force was used to overthrow the incipient nationalist republics that had arisen, such as the Magyar Republic that Louis Kossuth had built in Hungary.

By 1851, virtually all of Europe was politically back to where it had been before the outbreaks in 1848. Dreams of unifying Italy and Germany had been crushed, and the heyday of liberalism was over. In the final analysis, the revolutions of 1848 were long on ideals but short on practicality. From the beginning, they suffered fromdivisions in leadership and confusion in strategy. Many of their leaders had a passion for criticism and opposition but little talent for organization. As a result, the revolutions fell victim to the more experienced conservative authorities and the bullets and bayonets of Prussian, Russian, and Habsburg armies. Those who had harbored optimism for the future in the spring of 1848 were now disillusioned and angry. Many chose to seek their fortunes elsewhere and turned their attention across the Atlantic.

Immigration to the United States

Emigration from Europe seemed to be the only answer for many of the former revolutionaries. Several feared reprisal by the restoration authorities and faced criminal charges including high treason. Others felt that the future in their homelands was too bleak to bear. The majority of these immigrants were Germans, and the United States provided sanctuary. Approximately sixty thousand German “Forty-eighters” joined other groups of Europeans in this period of mass immigration, which also included a large group of Irish immigrants after Ireland’s failed 1848 rebellion against the British crown.

The influx of Germans led to an increase in nationalistic activities of previous German immigrants and tended to retard their assimilation into the American mainstream. The revolutionary struggles rekindled interest in the homeland and cultural traditions that had been abandoned upon entering the United States. Immigrant organizations underwent a transformation and increased in power and membership. Many put political pressure on the United States to intervene in the affairs of Europe. This political activism increased as revolutionaries came to the United States. Also, the immigrant press came of age in this era as, first, old immigrants demanded news from the Old World, and after their arrival, new immigrants brought a professionalism and enthusiasm for a Germanlanguage press. Between 1848 and 1852, the number of German-language newspapers in the United States doubled to 150.

The surge in ethnic pride and radical politics led to an increase in nativist feelings among nativeborn Americans. The nativists argued that instead of showing gratitude to the nation that gave them asylum, many of the exiles were openly critical of the United States and trying to remake the United States to meet their political and cultural desires. Others claimed that America was going to be used as a staging ground for a war with conservative Europe.

Regardless of the nativist reaction, the German Forty-eighters brought with them more than radical political ideas. Many of the immigrants were artisans who contributed considerably to the arts and crafts world of America. Among the Forty-eighters were also a number of medical professionals who brought their European training with them. They also brought with them appreciation of great masters of music such as Ludwig van Beethoven and Wolfgang Amadeus Mozart and the classical dramas of Friedrich Schiller, Johann Wolfgang von Goethe, and William Shakespeare.

Perhaps the most identifiable contribution was in the realm of education. One of the best schools in Maryland, F. Knapp’s German and English Institute, was founded by a Forth-eighter who had been convicted of high treason in Germany in 1850. The kindergarten movement in the United States began with German immigrants of this era. Fortyeighter politicians such as Carl Schurz played a substantial role in American politics during the 1850’s, and German immigrants played a role in the U.S. CivilWar. It was the sacrifices on that battlefield by the German immigrants that quelled most of the nativist argument against them by the 1870’s.