Significance: U.S. immigration laws have emphasized the goal of family reunification, making it relatively easy for relatives of immigrants already in the United States to enter the country. However, after arriving, immigrants must use their own resources to adapt and survive. Families are a significant source of social, economic, and emotional support.

Before 1882, the U.S. government imposed few restrictions on foreign immigration. With the passage of the Chinese Exclusion Act in 1882, Congress began a pattern of ever more restrictive immigration laws that were in force into the 1960’s. Despite their restrictions, however, each immigration law granted special exemptions to family members. For example, the Immigration Act of 1924 imposed quotas limiting the numbers of immigrants from specified countries, but it allowed two exceptions for family members. Wives were permitted to immigrate to join their immigrant spouses; however, husbands of immigrant wives were not granted the same exemption. Also, unmarried children under the age of eighteen of parents who were U.S. citizens were admitted without limitation from countries in the Western Hemisphere.

During the 1940’s, immigration restrictions were eased to support American wartime allies and to assist refugees.

The Immigration and Nationality Act of 1952 eliminated racial and gender discrimination but otherwise left the national quota system unchanged into the 1960’s.By that time, the Civil Rights movement had begun to change public attitudes about racial minorities. Nevertheless, some political conservatives continued to support immigration quotas to preserve what they regarded as racial and ethnic balance. However, cosmopolitan attitudes, expanding cultural awareness regarding discrimination, and liberalism of the 1960’s led to replacing immigration quotas based on nationalities with quotas based on hemispheres. The Immigration and Nationality Act of 1965, also known as the Hart-Celler Act, ended the practice of using national quotas to regulate immigration to the United States from non-Western countries. After receiving overwhelming support in Congress, the act was signed into law by President Lyndon B. Johnson on October 3, 1965, and went into effect on July 1, 1968. The law permitted up to 120,000 immigrants per year from the Western Hemisphere and 170,000 from the Eastern Hemisphere, with a limit of 20,000 from any single country. However, while the law allowed for 290,000 total immigrants, the actual numbers of immigrants who entered the United States was higher, as the law continued to allow exceptions for family members. Family reunification visas were unlimited.

In contrast to earlier immigration laws that emphasized the national origins of immigrants, the 1965 immigration law emphasized the goals of family reunification and bringing in skilled immigrants. The law awarded visas first to unmarried adults whose parents were U.S. citizens, followed by spouses and offspring of permanent residents and skilled professionals, scientists, and artists. Initially, parents of American citizens could enter regardless of the law’s quotas. However, in 1976, the law was amended to require children be at least twenty-one years old before their parents were permitted to immigrate. Before then, pregnant mothers could enter the United States illegally, have children who automatically became citizens, and then claim citizenship for themselves as the mothers of American citizens.

The 1965 law provided an impetus for increased immigration through the next four decades, especially from non-European countries. Most of the 22.8 million people who immigrated to the United States between 1966 and 2000 were family members of recent immigrants.

Chain migration plays an important role in reuniting families and facilitates the assimilation of new immigrants. It occurs when recent immigrants maintain connections with family and friends in their home countries. After individuals have immigrated to their new country and established themselves, other members of their families and friends often follow. Typically, husbands, unmarried sons and daughters of working age, or young, married, childless couples migrate first.

Chain migration occurs because early immigrants establish patterns of residency, and help recruit, support, and socialize new immigrants, most often family members. Many immigrants choose residential and occupational destinations because of kinship ties in the area. The flow of information about job opportunities in the new country encourages others to migrate and leads to ethnic concentrations such as Scandinavians in the midwestern United States and Germans in Pennsylvania.

Ethnic enclaves first arose in American cities as products of chain migration from such European countries as Ireland, Germany, Scotland, England, and Italy during the nineteenth century. In some cases, entire European communities regrouped in the United States, where they preserved their family ties and traditions within their new enclaves. This process continued well into the twentieth century. During the 1980’s, for example, Filipino immigration increased dramatically, and at least three-quarters of new Filipino immigrants were sponsored by family members already in the United States.

Later immigrants from Mexico and Central American nations had similar patterns of chain migration. Immigrants generally choose as their destinations communities that offer a familiar culture and family connection. Gateway cities, where immigrants first enter the United States, such as Los Angeles, Miami, and New York, attract disproportionate numbers of ethnic families because well-established social institutions, churches, and schools are already in place to provide social and economic support.

Some critics have charged that the family provisions of the Immigration and Nationality Act of 1965 tended to shift control of who was allowed to immigrate into the United States in the hands of foreigners through its kinship formulas. They have also charged that the law tends to discourage immigrants from assimilating into American society by encouraging chain migration. However, others have argued that the law’s family priority system and subsequent chain migration has actually helped immigrants to adapt and succeed, thereby strengthening American society. Immigrant families often form close-knit, extended family units whose members help raise one another’s children and cooperate economically. 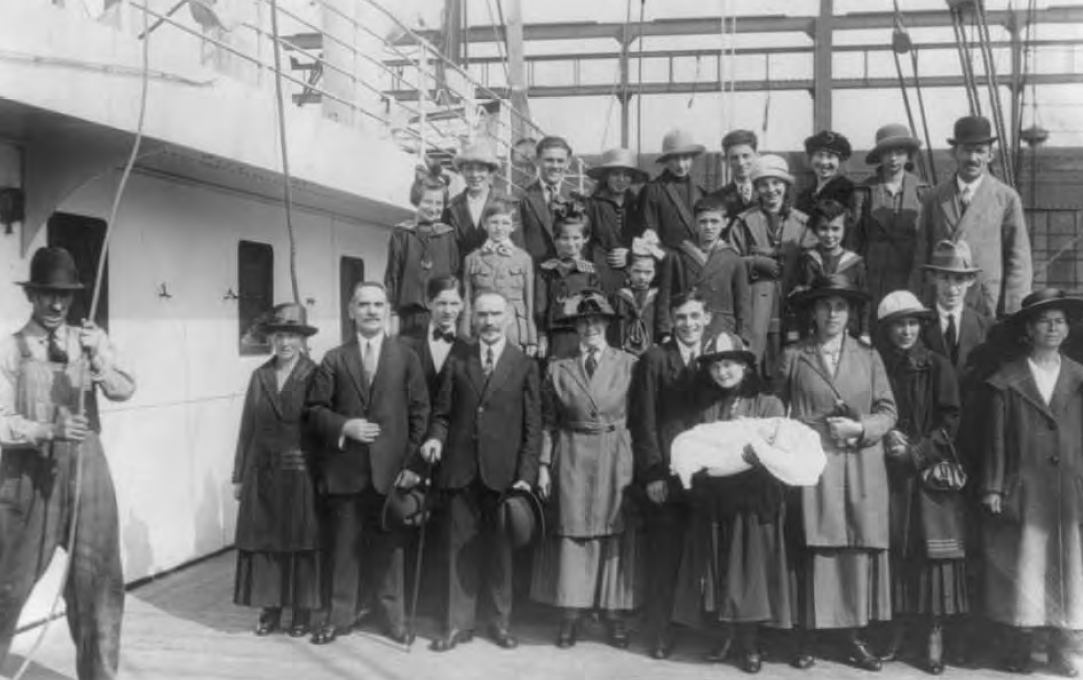 Family of Russian immigrants on their arrival in New York Harbor in 1921. (Library of Congress)

Historically, the success of immigrant groups has been closely tied to the ability of their members to establish strong families in the United States. Immigrant families demonstrate striking diversity. Their members migrate for different reasons, with different kinds of resources, and from vastly different homelands. Nevertheless, they all face similar challenges, including ethnic prejudices and discrimination and economic exploitation that limits occupational and educational opportunities. Immigrant families tend to fare better in their new homes than the people they leave behind. However, they generally have lower income levels and experience greater poverty than native-born American families. Male heads of immigrant families tend to be employed at wage levels similar to those of native-born families, but their employment is more likely to be part-time or seasonal. Many of their occupations are concentrated in such service industries as restaurants and laundries. Foreignborn women tend to have higher unemployment rates than native-born women.

The close family ties that typify many immigrant groups have fostered surprisingly good levels of health, despite the immigrants’ generally lower incomes and the often unhealthful and dangerous conditions in their countries of origin. For example, immigrant Mexican women tend to have low infant mortality rates and to bear babies with healthy birth weights, despite the fact that they typically come from great poverty. This apparent paradox has been explained, in part, by the close family ties that Mexican immigrants enjoy. However, the longer immigrants reside in the United States, the poorer their health becomes. This deterioration may be the result of changes in their diets and lifestyles. Moreover, immigrant families often experience difficulty obtaining access to health care because of language barriers, uncertainties about their legal immigration status, and their working in occupations offering no health benefits.

Immigrant families face generational conflicts complicated by the immigration process. The Immigration and Nationality Act of 1965 allowed many late-life immigrants to reunite with family members. About two-thirds of elderly immigrants are parents of U.S. citizens. Older immigrants tend to be poorer and less likely to speak English than younger ones. Because many immigrants maintain strong family ties, many older parents live with their adult children. Given this familism, parents provide their adult children high levels of emotional and child-care support, allowing younger family members more opportunities for wage-earning. However, because intercultural expectations can differ greatly, the presence of older parents in households may contribute to family conflicts. For example, many older immigrants expect their children to remain submissive and deferential, even as adults—traits less valued in the United States than in many other countries. Elderly immigrants who arrive in the United States expecting to live with their children and become involved in their day-today lives experience high levels of depression when they are disappointed in their hopes.

After passage of the Immigration and Nationality Act of 1965, many new immigrants to the United States came from patriarchal societies in which men were expected to dominate their families and that had well-defined divisions of labor between husbands and wives and between parents and children. Many immigrants from Latin America, Asia, the West Indies, and the Middle East view paid labor as undesirable for women. They believe that having women work outside their homes can contribute to a loss of ethnic identity because it symbolizes the failure of husbands to provide for their families. In practice, however, many immigrant women must work outside their homes because of the husbands’ difficulties in finding adequate employment. When women enter the work force, it contributes to “Americanizing” families and undermining traditional immigrant family structures.

One of the greatest challenges that immigrant families face is dealing with having theirwomenenter the paid workforce. Labor force participation does not empower immigrant women within their families as it does for native-born women. Many immigrant families attempt to preserve their traditional family arrangements, even when wives must work. Consequently, many immigrant women live double lives, asserting independence and power in the workforce, while deferring to the patriarchal gender hierarchies at home. These dual roles allow immigrant women to give their families economic, social, and political power as they adapt to new circumstances.