Definition: Mostly seasonal agricultural workers, many of whom are temporary immigrants

Significance: The supply of farm labor has become one of the most significant issues in U.S. immigration policy. During the early twenty-first century, the U.S. Department of Labor’s National Agricultural Worker Survey reported that 77 percent of all workers on American crop farms had been born abroad, that almost half the foreign-born workers had been in the United States for fewer than five years, and that more than half were not legally authorized to work in the United States.

Commercial farms in the western United States have long depended on workers from other countries. Most foreign farmworkers stay only long enough to earn target amounts of money and then return to their home countries. Some do remain in the United States, but their American-educated children rarely follow their parents into the fields. Consequently, much of the American agricultural industry has remained on a immigration treadmill, needing constantly to recruit new foreign workers willing to accept seasonal jobs.

Farmworkers have loomed large in U.S. immigration debates. During the mid-twentieth century, the U.S. government two made exceptions to policies blocking the entry of low-skilled foreigners in order to admit Mexican farmworker in the bracero programs. The first program brought legal Mexican workers to southwestern American farms between 1917 and 1921, a migration that afterward continued practically unimpeded, despite the formation of the U.S. Border Patrol in 1923. The second program admitted almost five million Mexican workers between 1942 and 1964 and established networks between rural Mexico and rural America that afterward continued to draw Mexican farmworkers north.

From the mid-1990’s into the early twenty-first century, about one-half of workers employed on American crop farms have not been legally authorized to work in the United States. After 2000, both farm employers and worker advocates agreed that the best way to deal with unauthorized workers in agriculture would be to legalize their immigration status and simultaneously make it easier for farmers to hire temporary foreign workers legally. In 2006, a bill called the Agricultural Job Opportunity Benefits and Security Act (AgJOBS) was included in the comprehensive immigration reform bill approved by the U.S. Senate in May, 2006. However, it was rejected in June, 2007. While running for president in 2008, Barack Obama endorsed AgJOBS, but no progress was made in getting the bill passed during the first year of his administration, largely because of resistance fromopponents of givingamnesty to undocumented immigrants.

During the late nineteenth century, as irrigation transformed the valleys of the western states into open-air greenhouses that produced fruits and vegetables, finding enough people to work the fields became a problem. Most leaders expected some of the immigrants then coming to the United States from eastern and southern Europe to travel by rail to California and other western states to become family farmers. Some did; however, most of the farmworkers in western states during the late nineteenth century were immigrants who were barred frommost nonfarmemployment. These included Chinese immigrants who had helped to construct the transcontinental railroad, only to be driven out of cities afterward.

Chinese workers were willing to work seasonally because they had few other options. The fact that they were paid low wages and were paid only when they worked kept costs of agricultural production down and increased the value of farmland. This made it more difficult for European immigrants who entered theWest on the railroad to buy land so they could become family farmers. Most of the large farms established by land grants and speculation during the gold rush era were not broken up into family-sized units. Instead, large-scale farmers who had cooperated in the development of irrigation facilities and in dealings with railroad monopolies also cooperated to find new sources of foreign workers. After the Chinese Exclusion Act of 1882 virtually stopped Chinese immigration, the American farmers turned to Japan. They attracted thousands of Japanese farmworkers to California, until the so-called Gentlemen’s Agreement of 1907 between the United States and Japan stopped Japanese immigration.

During World War I, farmers persuaded the U.S. government to exempt Mexicans from restrictions imposed by the Immigration Act of 1917 to slow European immigration. On May 23, 1917, the U.S. Department of Labor, which then included the Bureau of Immigration, approved the request of western farmers “to admit temporarily otherwise inadmissible aliens” to work in agriculture and on railroads. This began the first bracero program. Under this program, almost 80,000 Mexican farmworkers came to the United States before the program was halted in 1921. Most of these people worked in cotton and sugar beet fields.

In 1931, as the Great Depression was worsening, many Mexicans who had settled in the United States were sent back to Mexico in order to open jobs for American workers. The reduction of Mexican workers in the West and dust bowl conditions in midwestern states brought a new wave of migrant farmworkers to the western states. For the first time, most newcomers to the western agricultural labor force were English-speaking American citizens. Their experiences as seasonal farmworkers would be memorialized in John Steinbeck’s 1939 novel, The Grapes of Wrath. That book and the film adapted from it helped provide an emotional impetus for farm labor reforms.

Farm labor reformers were divided between those such as University of California economist Paul Taylor, who wanted to break up big farms and turn farmworkers into small farmers, and those such as writer Carey McWilliams, who wanted the U.S. government to recognize large farms as openair factories and apply factory labor laws to them. Taylor opposed treating agriculture as other industries. Perhaps ironically, he was the husband of photographer Dorothea Lange, whose famous “Migrant Mother” photograph famously captured the desperate poverty of Depression-era migrant farmworkers. 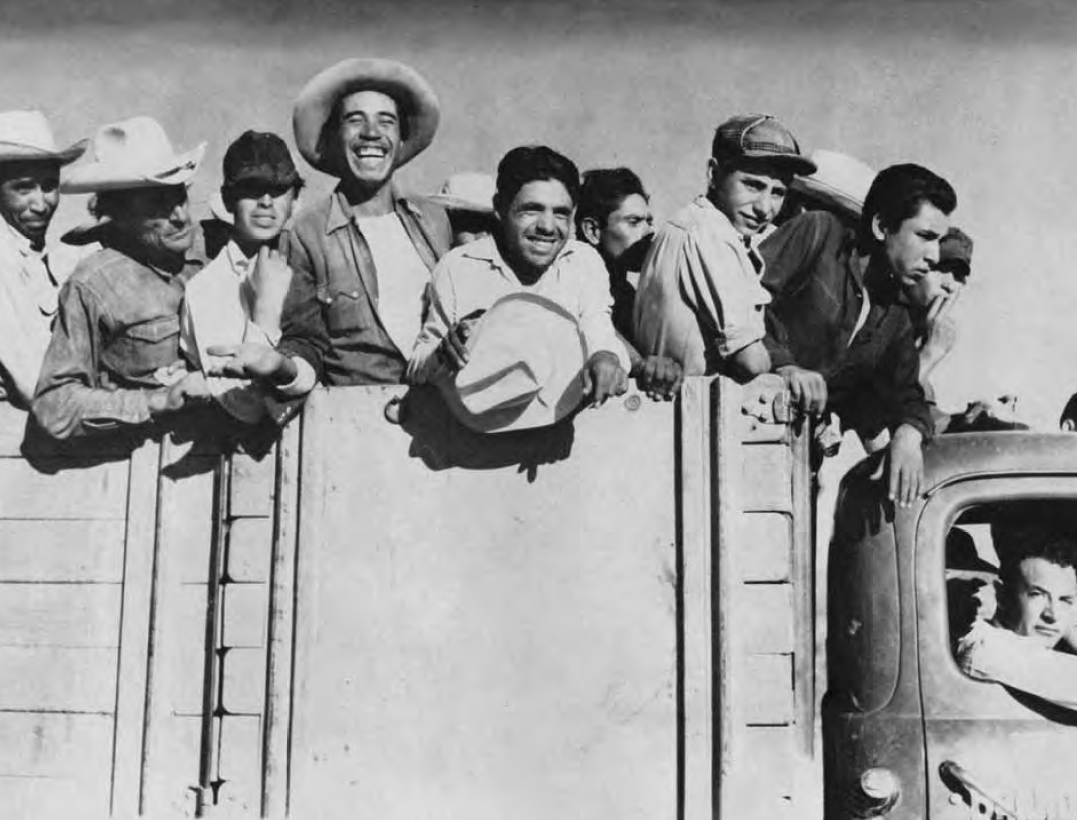 Mexican farmworkers leaving Chihuahua City, Mexico, to work in the bracero program in Texas during the 1950’s. (AP/Wide World Photos)

The standoff among farm labor reformers met strong opposition from farmers who opposed both land reform and labor laws. Meanwhile, American entry into World War II in 1941 set the stage for a new bracero program to supply farmworkers as Americans mobilized for war. The new program began on a small scale during the war years but eventually expanded to admit almost 500,000 Mexican workers a year into the United States during the 1950’s. Operation Wetback slowed unauthorized migration in 1954-1955, so the federal government made it easier for farmers to hire legal bracero workers.

In 1964, the U.S. Congress ended the bracero program, convinced that bracero workers were holding down wages and retarding opportunities for American farmworkers. That view appeared to be vindicated in 1966, when the Mexican American farmworker César Chávez took over the leadership of a Filipino grape pickers’ union, which he helped win a 40 percent wage increase for grape harvesters. The union succeeded, in part, because bracero workers were not available to break strikes.

Chávez then helped found the United Farm Workers (UFW) union, which flourished through the next fifteen years, while unauthorized immigration remained low. In 1975, the union’s mostly Mexican American members persuaded the state of California to enact an agricultural labor law that applied factory labor laws to farms, as Carey Mc- Williams had proposed doing during the 1930’s. Under UFW contracts, entry-level wages for farmworkers rose to twice the level of federal minimum wages during the late 1970’s. Some people predicted that unionization would sweep American agriculture, making the UFW one of the largest American labor unions. However, a combination of factors reduced the power of the UFW during the 1980’s; one was rising rates of unauthorized immigration. There were few federal sanctions on the hiring of undocumented immigrants until passage of the federal Immigration Reform and Control Act (IRCA) of 1986 was enacted. Some farmers tired of dealing with UFW demands encouraged their Mexican supervisors to become labor contractors by recruiting friends and relatives in Mexico. As these labor contractors began supplying more workers to farms, the UFW supplied fewer.

UFW leaders thought that the 1986 immigration reform law would strengthen their union as previously undocumented immigrant workers would become union supporters in return for union assistance. However, the UFW helped only a few of the one million foreigners whose immigration status was legalized the 1986 law’s agricultural provisions. The new upsurge of unauthorized immigration that accompanied IRCA doomed union efforts to raise wages. IRCA’s legalization provisions allowed one-sixth of the adult men in rural Mexico to work in the United States legally, but it did not provide for the workers’ families. Framers of the act evidently hoped that the Mexican workers would be satisfied to commute between their Mexican homes and the American farms, but this view proved wrong. During the recession of 1990- 1991, many of the Mexicans whose immigration status had been legalized under IRCA brought their families in the United States, thereby increasing public costs for schooling, health care, and other serves. The resulting anti-immigrant backlash among citizens in California helped spur a state ballot initiative called Proposition 187, which California voters approved by a wide margin in November, 1994. Had not implementation of Proposition 187 been blocked by the courts, the measure would have created a state-funded system to ensure that undocumented immigrants did not gain access to state-funded services.

By the time of César Chávez’s death in 1993, UFW membership had fallen to less than 10 percent of its 70,000-member peak of the early 1970’s. Competition with undocumented immigrant farmworkers encouraged American farmworkers to look for jobs in nonagricultural sectors. Meanwhile, the children of both legal and unauthorized farmworkers educated in the United States did not follow their parents into the fields, contributing to the dependence of American farmers on fresh immigrants from abroad.

IRCA helped to spread immigrant farmworkers throughout the United States, eventually making Mexican-born farmworkers almost as common in states such as Iowa and North Carolina as in California. Farmers acknowledged that many of the workers they hired were undocumented and lobbied Congress to create a new guest-worker program during the mid-1990’s. However, farmworker advocates persuaded Congress not to approve such a program. Their hand was strengthened by President Bill Clinton, who issued a statement in June, 1995, expression his opposition to any program that would bring thousands of foreign workers into the United States for temporary farm labor.

The pattern of farmworker advocates blocking farmemployer requests for a new guest worker program continued through the year 2000. In response to the election of Mexican president Vincente Fox and U.S. president George W. Bush during that year, worker advocates and employers agreed to repeat the IRCA agricultural provisions, which legalized unauthorized farmworkers and made it easier for farm employers to obtain legal guest workers. The IRCA guest-worker provisions were not used because so many unauthorized workers were available.

The AgJOBS bill embodying the compromise between workers and employers was reintroduced repeatedly after 2000 but was unsuccessful despite strong bipartisan support. As a counter to AgJOBS, George W. Bush’s administration proposed a new guest-worker program, called H-2A, as it prepared to leave office in early 2009, despite objections fromincoming President Barack Obama and Democratic leaders in Congress. The revised H-2A program achieved many of the changes sought by farm employers in AgJOBS, but without legalizing undocumented immigrants.

U.S. immigration and enforcement policies have played a major role in determining the composition of the agricultural workforce and the wages of farmworkers. Farmworkers have continued to be mostly relatively recent arrivals from abroad. Most of them have seen working for wages on American farms as their first step up the American job ladder. Few immigrant farmworkers who have remained in the United States have been able to rise to the middle class. Their hope has been that their children, educated in the United States, will eventually achieve the upward mobility that originally drew them to the United States.