Significance: Newcomers to Florida, from both other countries and other parts of the United States, have tended to settle in clusters, while maintaining their ethnic identities and their ties to their birthplaces. As a result, Florida is often viewed as an artificial entity, made up of regional groups that differ markedly from one another both culturally and politically.

When the first Europeans arrived in what would become the state of Florida during the sixteenth century, they found the Panzacola, Chatot, and Apalachicola Native American tribes in the western panhandle, the Apalachee and Timucua in the east, and the Calusa and Metecumbe in the south. Two centuries later, Creeks moved south into Florida, where they became known as Seminoles. By the twenty-first century, few Native Americans were left in the state. Those who had not succumbed to diseases brought in by the Europeans were either killed in battle or shipped west under the U.S. government’s policy of Indian removal during the nineteenth century.

Spanish explorers discovered and named Florida in 1565. That same year, they founded St. Augustine, making it the first European city in the United States. In 1698, Pensacola became a permanent settlement in the panhandle. When control of Florida passed to the British in 1763, Florida was divided into two colonies: East Florida, with its capital at St. Augustine, and West Florida, governed from Pensacola. The Spanish promptly left St. Augustine, and English and Scottish immigrants moved in. Those with the means to do so established huge plantations nearby.

Less prosperous Europeans from Minorca, Greece, and Italy were brought in as indentured servants, and there were also a great many black slaves. Because Florida remained loyal to Great Britain during the late eighteenth century American Revolution, Tories from coastal cities such Savannah, Georgia, and Charleston, South Carolina, found refuge in St. Augustine. By the time the United States acquired Florida in 1821, the region’s white population was primarily British or Anglo- American. However, there were also a number of Jewish settlers in St. Augustine and in Pensacola. 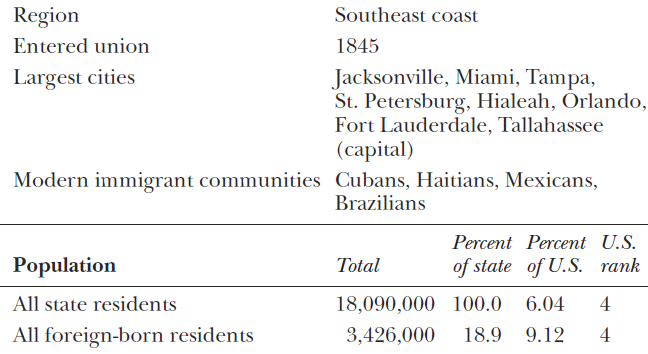 Even before the Civil War (1861-1865), Florida had been promoted as a place where ailing northerners could come to regain their health. By the end of the century, Florida had become fashionable. Refugees from the cold weather of the northern states and Canada spent their winters in Florida, built homes there, and often retired there. During the 1930’s, many Jewish Americans from New York City began settling in Miami and Miami Beach. In 1959, Cubans fleeing from Fidel Castro’s new communist regime began to arrive there. By 1980, 60 percent of the Miami population was Cuban. Because most of these exiles were well educated, they contributed significantly to the growth of the city, notably through banking and business dealings with Latin America.

During the late 1950’s, Haitians in flight from a repressive regime began coming to Florida. The first of them to arrive were mostly members of the middle and upper classes. Despite encountering racial discrimination, they soon adjusted to their new country. However, by the 1970’s, though some Haitians were still granted asylum, boatloads of undocumented Haitians were being routinely intercepted, denied asylum, and sent home.

At the end of the twentieth century, almost 20 percent of the total population of Florida had been born in foreign countries. Many of the new immigrants came from Brazil, Nicaragua, El Salvador, Colombia, and the Dominican Republic. However, they were greatly outnumbered by Mexicans, who by 2006, ranked second behind Cubans among the state’s foreign-born communities. By that year, Florida ranked fourth among all U.S. states in the size of its foreign-born population.