Definition: Discriminatory taxes imposed by the state of California on Mexican and Asian miners

Significance: In the absence of federal laws that discriminated against immigrants, the state of California sought to favor immigrants of European origin by enacting special taxes that targeted the state’s Mexican and Chinese miners.

After the discovery of gold in northern California in 1848, a major gold rush drew waves of immigrants to the state’s new mining industry. Although the U.S. government officially encouraged the importation of Chinese laborers during the 1840’s and 1850’s, the Chinese who arrived on American shores encountered fierce racial animosity, as did miners from Latin America. Employers liked the Mexicans and the Chinese because they were inexpensive workers. However, many white workers felt threatened by the competition. The Irish and German miners, undoubtedly prompted as much by economics as by racism, were particularly outspoken about their dislike of those whom they regarded as “foreigners” in the mines.

Responding to the demands of the Irish and Germans, the state of California enacted the Foreign Miners’ Tax in 1850. The tax was designed to discourage immigration by removing an economic incentive for moving to the United States or remaining in the country. The law, primarily directed at forcing Latinos out of the mines, required all persons who were not native born or who had not become American citizens under the Treaty of Guadalupe Hidalgo, which had settled the MexicanWar, to pay twenty dollars for licenses allowing them to mine. An exception covered California’s Native Americans.

The law did prove successful in its aim. Mexican miners balked at the exorbitant charge and refused to pay it. Twenty U.S. dollars in 1850 was the equivalent of almost five hundred dollars in 2008. After Mexican workers exited the mines, the Chinese remained as the largest nonwhite group of miners. As a result, anti-Chinese sentiment rose throughout the 1850’s. In the absence of restrictive federal immigration laws, the state asserted control over immigrants. The next foreign miner tax, enacted in 1852, targeted the Asians. The anti- Chinese legislation would ultimately culminate in the federal Chinese Exclusion Act of 1882, which barred entry of Chinese workers in the United States altogether. 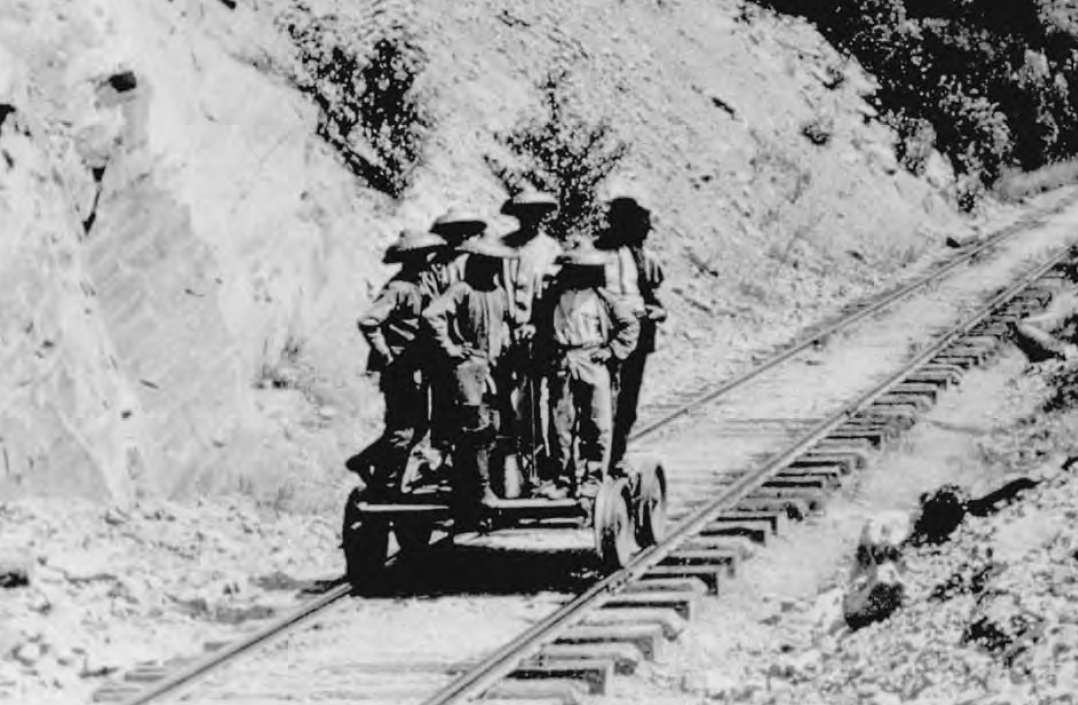 Chinese mine workers traveling on a railroad handcart in California. (Asian American Studies Library, University of California at Berkeley)

Despite their discriminatory treatment, both Mexican and Asian miners continued to play critical roles in the development of California. Apart fromcontributing to the population growth that allowed California in 1850 to become the first territory in the farWest to achieve statehood, these “foreign” miners brought critical skills. The Mexicans, largely from the area of Sonora, possessed considerable experience and knowledge of mining techniques. They introduced the stair-step separator, known as the sluice box. They also utilized methods of dragging to crush ore. The Chinese did not have the same degree of mining experience but many displayed considerable resourcefulness in turning profits on mines that had been abandoned because of the difficulty in finding ore.