Arising out of the Russian Revolution that began in 1917, the Soviet Union expanded into the largest nation in the world in land area and became a world superpower after World War II. In theory at least, it was a voluntary union made up of fifteen autonomous Soviet socialist republics, but it was dominated by Russia, by far the largest of the republics in both population and area. Under the strains of the Cold War and the pressures of the modern world economy, the Soviet Union collapsed in 1991 and separated into its constituent republics, each of which became an independent nation.

The fifteen Soviet socialist republics that made up the Soviet Union all became independent after the breakup of the union in 1991. They can be divided into five groups:

None of these states is ethnically homogeneous, and several are home to large ethnic minorities—notably ethnic Russians. Several of the countries have been troubled by separatist movements and quasi-autonomous regions within them.

During the late nineteenth century, peasant emancipation and the expansion of a market economy began to affect the western regions of the Russian Empire, sparking the emigration of ethnic Poles, Jews, Ukrainians, Lithuanians, Latvians, Finns, and ethnic Germans. Emigration to America was heaviest from the areas bordering the German and Austrian empires in the west and was much lighter from regions to the east. Prior to World War I (1914-1918), transatlantic immigration of ethnic Russians and Ukrainians from eastern and central Ukraine was limited. Opportunities for settlement in southern Russia and Siberia drew many people eastward in a wave of internal migration. Nevertheless, during the first decade of the twentieth century more than 1.5 million immigrants from the Russian Empire arrived in the United States. Despite a halt in immigration during World War I, another 1.1 million immigrants came during the following decade.

Ukrainian immigration to the United States has been significant since the 1880’s. At that time most Ukrainian immigrants came from the provinces of Galicia and Bukovina in the eastern reaches of the Austro-Hungarian Empire. Following the failure to establish an independent Ukrainian nation after World War I and the subsequent Soviet repression, culminating in the terror-famine of the early 1930’s, many Ukrainians active in the independence movement left their homeland. Alongside Ukrainians were Rusins (or Carpatho-Rusyns), members of small east-Slavic speaking communities in the eastern Carpathian region. Ukrainian and Rusin immigrants settled in industrial regions of the United States, such as New Jersey, Pennsylvania, and the Great Lakes states. Large numbers also settled on Canada’s western prairies.

Polish, Jewish, and Finnish immigrants were the largest groups from the former Russian Empire, but most came from regions that after 1922 were outside the Soviet Union. Jews from central Belarus or central Ukraine were an exception. Aside from these groups, Lithuanians and Latvians came to the United States during this era, the former greatly outnumbering the latter. Both groups settled in industrial regions of the Northeast and Great Lakes states. Russian Germans from Ukraine and the Volga regions also arrived during this period, settling in the Great Plains and Midwest. Small number of Estonians and Belorussians also arrived in the United States. Following the Russian Revolution and the defeat of anticommunist forces, a small number of so-called “White” Russians settled in the United States.

World War II (1939-1945) displaced large numbers of Soviet citizens from their homelands as well as citizens of the three Baltic states, Poland, and Romania. During the war, many people were taken as slave laborers by Germany’s Nazi regime to work in factories and farms. Others became prisoners of war or victims of Nazi persecution, and still others were refugees who fled the fighting as well as violence, genocide, and ethnic cleansing that were integral features of the war on the eastern front. Following the Yalta accords of early 1945 that recognized Soviet domination of Eastern Europe, significant portions of Poland, Romania, and all the Baltic states were annexed by the Soviet government, which imposed a regime of terror on the remaining inhabitants.

Postwar legislation put in place to ease earlier national-origin quotas in light of the refugee crisis allowed a significant number of former Soviet citizens into the United States, especially people from the Baltic republics, Belorussians, and Ukrainians. After the end of the national origin quotas in 1965, a trickle of Soviet citizens arrived in the United States during the era of U.S.-Soviet détente, often under family reunification provisions. The so-called refuseniks were a small but important group of anti- Soviet immigrants. Many Soviet immigrants of Jewish ancestry sought to emigrate to Israel or the United States but were denied by the Soviet government, which viewed them with suspicion and prejudice.

Harsh treatment of Soviet Jews became a major human rights issue for Americans during the 1970’s. The Jackson-Vanik amendment to the U.S. Trade Act of 1974 penalized the Soviet Union and other countries that restricted the right of emigrants peacefully to leave their homelands. The law effectively pressured the Soviet government into releasing a steady flow of emigrants, primarily dissidents and members of minority religious communities— Jews, evangelical Christians, and Roman Catholics. The majority of these immigrants settled in the United States. The most famous Soviet immigrant of this period was the Nobel Prize-winning writer Aleksandr Solzhenitsyn, who settled in Cavendish, Vermont.

Following the rise of the Solidarity movement in Poland and the subsequent peaceful revolutions in east-central Europe, communism began to collapse in the Soviet Union, despite the reformefforts of Mikhail Gorbachev, the president of the Soviet Union. In 1991, a failed coup against Gorbachev brought an end to the Soviet Union and all of the constituent republics declared independence. The newly independent states, including Russia, continued to send significant numbers of immigrants to the United States. 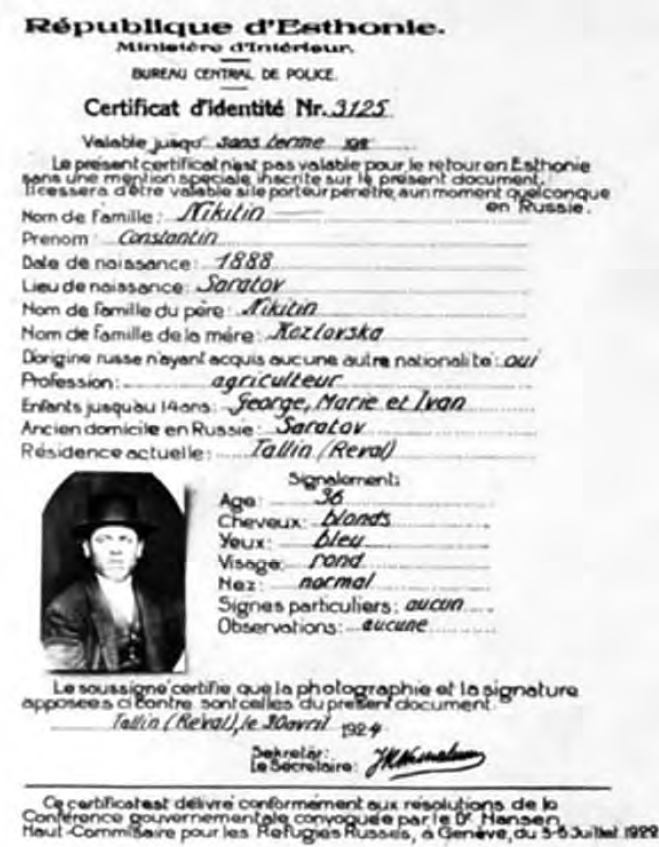 Many refugees from the Soviet Union who could not obtain Soviet passports, traveled under League of Nations passports such as this one, which was issued shortly after Joseph Stalin took power in the Soviet Union. (Library of Congress)

From the mid-1980’s until 2008, more than 1 million legal immigrants were admitted to the United States. from countries of the former Soviet Union, including the three Baltic republics. The three Slavic countries of the FSU contributed the majority of these immigrants. Of the three, Ukraine has provided the most, calculated both in raw numbers and as a percentage of the country’s total population. Among the five Central Asian republics, Uzbekistan, the most populous of the group, has sent the most immigrants, followed by Kazakhstan. A significant portion of immigrants from the Central Asian republics appear to have been ethnic Russians. Likewise, immigrant streams fromUkraine and Belarus appear to have included numerous Russians. Immigrants from nearly all the states of the former Soviet Union outside Russia itself speak Russian, and those who speak Russian as their primarily language are in the great majority in several of the countries, most notably Belarus.

A high proportion of immigrants from the former Soviet Union have been Jewish in heritage. Their precise number is unknown, but estimates have ranged as high as 700,000 immigrants throughout history. Approximately one-half of these immigrants have settled in the greater New York City metropolitan area. Other important centers of immigration have included Philadelphia, Miami, Chicago, San Francisco, and Los Angeles.

Due to their different socioeconomic standing and experiences in the former Soviet Union, most post-Soviet immigrants have tended to form their own organizations and develop their cultural and social activities apart from established communities. Jewish immigrants from the former Soviet Union have tended to be secularized and often religiously nonobservant. Although efforts have been made to change that, and Jewish American social service agencies continue to play an important role in serving Jewish immigrants, especially the elderly, the majority of these immigrants remain apart from the community mainstream. A similar situation exists among non-Jewish immigrants, such as Ukrainians, who have not joined existing Ukrainian American organizations in large numbers.

The growth of the Russian-speaking population in the United States during the two decades since the collapse of the Soviet Union has spurred the growth of Russian-language media. In 2008, nearly thirty Russian-language and bilingual newspapers and magazines were published within the United States. All but one—New York City’s daily Novoye Russkoye Slovo—were weeklies and biweeklies; most were published in the greater New York area. There were also several cable television channels broadcasting in Russian and a New York-area Russian radio network. Most Russian-language television programming is produced in Russia. The growth of new media among new immigrants from the former Soviet Union has been somewhat hampered by competition with ready Internet access to homeland newspapers and the streaming of radio and video broadcasts.

Another important contribution of first-generation immigrants from the former Soviet Union has been widespread entrepreneurship. Small to medium- size start-up firms are common and most cities with any sizeable community of recent Russian or Ukrainian émigrés supports at least a few ethnic delicatessens and gift shops.

Alongside such positive aspects of post-Soviet immigration to the United States, there have also been growing problems of crime and violence. Russian and post-Soviet organized crime groups with ties to Russian-based mafia and Russian security services have become a major problem in the United States. During the late 1980’s, the Brighton Beach section of Brooklyn was a notorious area for Russian mafia activities, which often preyed on fellow immigrants in various extortion schemes. Since that time, organized Russian crime operations have expanded throughout the United States. Typically well educated, sophisticated, knowledgeable about computers and international finance, and apparently enjoying the covert support of Russian security agencies, members of the Russian mafia have posed major threats to American law enforcement, despite the arrests and convictions of a few notable racketeers. These groups have also been involved in drug trafficking and prostitution and developed ties to organized crime groups from other ethnic and racial backgrounds. Some youth gang activities have also been observed, including Armenian gangs, such as “Armenian Power” in the Los Angeles area.

The apparent growth of the Russian economy during the middle of the first decade of the twentyfirst century, due to high oil prices, has somewhat reduced emigration fromRussia. However, emigration fromUkraine, Moldova, and the Central Asian republics has remained fairly steady. In 2009, it appeared likely that post-Soviet countries would continue to send immigrants to the United States into the foreseeable future.