Significance: French immigration to the United States has been episodic, generally paralleling religious, political, and economic upheavals in France.

French settlement in the United States began during the age of exploration and colonization of the seventeenth century in Louisiana and intensified with the expulsion from France of the Huguenots or French Protestants during the eighteenth century. Migration from French Canada in 1755 originated with the expulsion of the Acadian French from Nova Scotia by Great Britain. Voluntary migration of French Canadians intensified from 1900 until 1930 to New England to work on the assembly lines of shoe and textile factories. Haitian migration to New York City increased during the 1980’s because of economic and political upheavals. French migration to the United States can also be documented from the French-speaking nations of Belgium, Switzerland, West Africa, and French Polynesia.

French Immigration Before the Revolution

French interest in the Americas was stimulated by the earlier voyages of the Spanish, Portuguese, and English. During the seventeenth century, explorers sailing under the French flag navigated the waters of the Gulf of Mexico and the Atlantic Ocean and founded settlements along the Mississippi River in what would become Louisiana and along the St. Lawrence River in New France or Quebec, with much smaller settlements at Beaufort, South Carolina, and Jacksonville, Florida.

Emigration from France was strictly regulated by law. French settlers in the New World were usually trappers, soldiers, or clerics until 1685, when King Louis XIV revoked the Edict of Nantes stripping the Protestant Huguenots of their political rights unless they converted to Roman Catholicism. In response, many Huguenots opted to emigrate to North America. Among France’s most skilled artisans, the Huguenots were well-educated members of the wealthy middle class. Their departure crippled the French economy but led to the creation of prosperous settlements at New Rochelle, Staten Island, Harlem, and New Paltz in what would become the state of New York. Huguenot families also settled in Massachusetts, Pennsylvania, Virginia, and South Carolina, Conflicting accounts make it difficult to provide accurate figures on the numbers of Huguenots who settled in the future United States. Estimates range from as few as 3,000 to as many as 15,000 before the first U.S. Census in 1790.

The first U.S. Census in 1790 listed 11,307 residents of French origin. New York, Pennsylvania, South Carolina, and Maryland had the largest numbers of French-speaking residents. Other states with significant French populations included North Carolina, Virginia, Vermont, Connecticut, Massachusetts, Rhode Island, New Hampshire, and what was then the territory of Maine.

During the 1860’s, the decade in which the U.S. Civil War was fought, the number of new French immigrants declined to 37,749. The 1870 U.S. Census counted 115,260 U.S. residents born in France, with the largest numbers in New York, Ohio, Louisiana, Georgia, and Pennsylvania. The loss of the French province of Alsace-Lorraine to Germany in 1871 increased the number of French Alsatians, particularly French Jews, who went to the United States. Nevertheless, the 1880 U.S. Census saw a decline in the number of French-born residents of the United States to 104,143. By this time, California had replaced Ohio among the five states with the most French residents.

The 1900 census showed a further decline in the size the French-born population, whose numbers had dropped to 102,535. The largest communities were in New York, Colorado, Illinois, Pennsylvania, and Louisiana. Between 1875 and 1914, France’s politics and national economy was stabilizing, and most French emigrants chose to see economic opportunities in French colonies in North Africa and Southeast Asia. 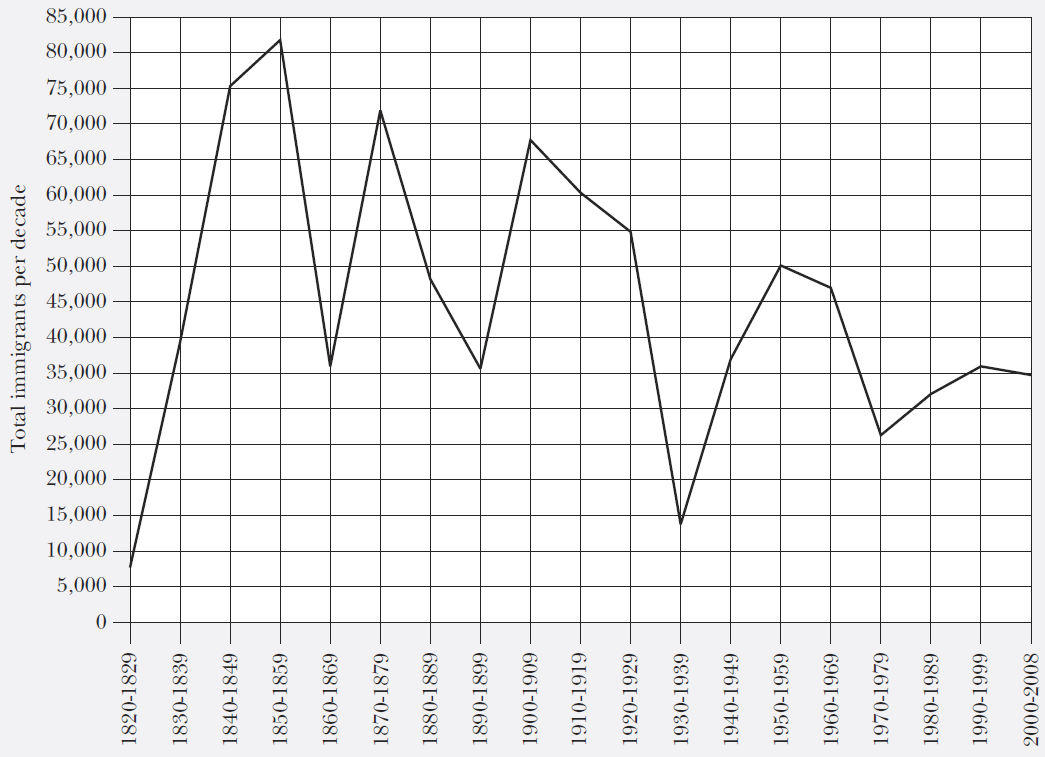 Immigration from France declined during the upheavals brought by World War I (1914-1918) and World War II (1939-1945). After 1945, Europe experienced an economic recovery that further discouraged emigration to the United States, and new immigration was most likely to be motivated by marriages between French and American citizens. The postwar French immigrants who came to the United States generally had high levels of education and significant job skills.

In 1980, the U.S. Census began collecting information on national ancestry and found that 13 million American citizens regarded themselves as having French ancestry. More than one-quarter of these people lived in the Northeast. A similar percentage in north-central and southern states claimed French ancestry, but in the West only 19 percent claimed French heritage. The individual states with the most residents claiming French ancestry were California, Louisiana, Michigan, Massachusetts, and New York.

Brasseaux, Carl A. The Foreign French: Nineteenth- Century French Immigration into Louisiana. Lafayette: Center for Louisiana Studies, University of Southwestern Louisiana, 1990. Survey of the complex ethnicity of Louisiana, which was founded as a French colony and still retains much of its French heritage.

McDermott, John Francis, ed. Frenchmen and French Ways in the Mississippi Valley. Champaign: University of Illinois Press, 1969. Collection of scholarly articles on the contributions of French explorers and immigrants to the Mississippi region.

Robbins, Albert. Coming to America: Immigrants from Northern Europe. New York: Delacorte Press, 1981. Broad survey of the history of immigration to the United States from northern European nations including France.