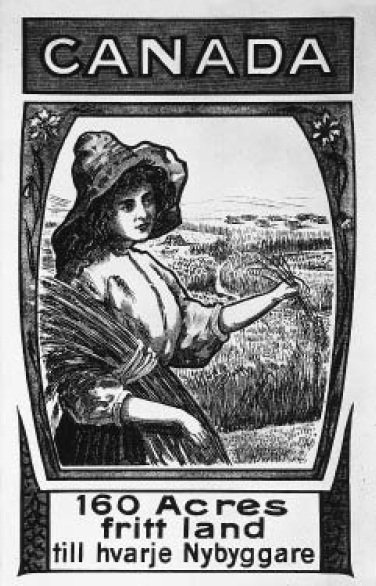 An advertisement in Swedish for Canadian land from the first decade of the 20th century. Both Canada and the United States advertised widely for agricultural immigrants to fill their empty prairies. (Canadian Department of the Interior/National Archives of Canada)
Still, the Canadian government was interested in European laborers, especially if they were willing to farm the western prairies. The federal government, which administered western lands under the Department of Agriculture, tried to encourage immigration with a generous homestead provision. The most important single piece of legislation was the Dominion Lands Act (1872), under which any male head-of-family at least 21 years of age could obtain 160 acres of public homestead land for a $10 registration fee and six months’ residence during the first three years of the claim. The policy was on the whole a failure. An average of fewer than 3,000 homesteaders per year between 1874 and 1896 took advantage of the program. Lack of railway access and isolation contributed to the slow rate of development. As the government continually sought funding for the building of the Canadian Pacific Railway, it also launched plans to sell lands to colonization companies. The plan failed between 1874 and 1877 and again between 1881 and 1885. The generous provision of sale of land to colonization companies at $2 per acre, with the promise of a rebate once settlement and transportation links to other settlements had been established, led to little more than massive land speculation. Although 26 companies had procured grants totaling nearly 3 million acres by 1883, only one company fulfilled its agreement. More successful were group settlement plans that set aside large tracts for specific immigrant groups such as the Mennonites (see Mennonite immigration), Scandinavians, Icelanders (see Icelandic immigration), Jews (see Jewish immigration), Hungarians (see Hungarian immigration), and Doukhobors.
From the mid–1890s until World War I (1914–18; see World War I and immigration), favorable government policies, eastern industrialization, and the opening of the western provinces to agriculture brought 300,000–400,000 immigrants each year, most from the British Isles and central and southern Europe. This relatively open policy was nevertheless opposed by virtually all francophone nationalists in Quebec, who feared that the French minority was being deliberately swamped with English speakers. The flood of immigrants led to passage of the 1906 Immigration Act, which greatly expanded the categories of undesirable immigrants, enhanced the power of the government to make judgments regarding deportation, and set the tone for the generally arbitrary expulsion of undesirable immigrants that characterized Canadian policy throughout much of the 20th century. In the period between World War I and World War II (1939–45; see World War II and immigration), economic depression and international turmoil kept immigration low, averaging less than 20,000 per year. After the war, immigration remained a significant demographic force in the country, especially during times of international crisis. The Immigration Act of 1952 nevertheless continued to invest the minister of citizenship and immigration with almost unlimited powers regarding immigration. As late as 1957, 95 percent of all immigrants to Canada were from Europe or the United States. That changed rapidly in the 1960s, as European countries abandoned their colonial empires in Africa and Asia and the Canadian public began to support a more active policy toward refugee resettlement. A new series of immigration regulations in 1967 introduced for the first time the principle of nondiscrimination on the basis of race or national origin, virtually ending the “white Canada” policy that had prevailed until that time. The following year, the Union Nationale government in Quebec established its own Ministry of Immigration, which was recognized by the federal government as a result of the Couture-Cullen Agreement in 1978. As a result, Quebec gained effective control of nonsponsored immigration into the province and the right to establish its own criteria. While the goal of the federal government was increasingly multicultural in character, Quebec pursued what it called “cultural convergence,” receptive to non-francophone cultures but clearly valuing maintenance of francophone predominance.
Between 1965 and 2001, European immigration to Canada dropped from 73 to 10 percent of the total. Between 1852, when Statistics Canada began publishing records, and 2001, about 16 million immigrants came to Canada. Of these, almost 2 million came in the period between 1991 and 2001, and almost two-thirds of these were from Asia, mainly from China, India, Pakistan, Korea, and the Philippines.
See also Alien Land Act; Chinese Immigration Act; Immigration Act (1910); Immigration Act (1976); Immigration and Refugee Protection Act; Immigration Appeal Board Act; P.C. 695.