Significance: Although Haitians are citizens of the second-oldest republic in the Western Hemisphere, an island nation located only seven hundred miles from the United States, they have experienced unique difficulties in finding acceptance as immigrants and have become one of the most abused groups of immigrants in modern American history. Black-skinned, Frenchand Creole-speaking, and generally very poor, Haitians have been slow to assimilate into American society.

A comparatively small Caribbean nation whose people are virtually all descendants of African slaves, Haiti occupies the western third of the island of Hispaniola, which it shares with the Dominican Republic. Immediately to its west is the larger island of Cuba, and the much smaller island of Puerto Rico lies to the east of Hispaniola. After a 1697 treaty between France and Spain split the island into French and Spanish colonies, France began developing its western portion as the colony of Saint-Domingue. Saint-Domingue proved a deadly home to European settlers, but over the course of the next century, African slave labor made it a prosperous sugar- and coffee-producing colony. During the 1790’s, the black workers on whose backs the colony’s prosperity was built rose up in revolt. After a decade of bloody wars, the slaves ousted the French and established the independent nation of Haiti in 1804.

Over the next two centuries, Haiti never gained full political stability and became one of the poorest nations in the world. Nevertheless, its population continued to grow. By the twentieth century, its limited arable land could not easily feed all its people, and emigration to other countries became an increasingly attractive option for many Haitians.

During the early twentieth century, many rural Haitians began moving to the cities, causing such overcrowding that many city residents sought better living conditions abroad. Some went east, overland to the adjacent Dominican Republic, and some went to French-speaking African countries and to French Canada. Many others emigrated to the nearby United States. Mostly from Haiti’s small middle and upper classes, these emigrants were generally well educated—some had attended schools in France—and most found new homes and good jobs abroad.

During the 1950’s and 1960’s, Haitian emigration increased after President Francois “Papa Doc” Duvalier declared himself ruler for life and deprived his citizens of privileges and rights they had enjoyed under earlier regimes. The best-educated Haitians—doctors, lawyers, teachers, and engineers— who opposed Duvalier were special targets of his animosity. They left the country in large numbers, creating a serious “brain drain” that the country could ill afford. Indeed, so many qualified doctors left between 1957 and 1963 that only three of the 264 graduates of Haiti’s lone medical school remained in Haiti.

From 1957 until his death in 1971, Duvalier continued his repressive regime. As the country’s economy deteriorated, more Haitians fled to America, where the sympathetic U.S. government welcomed them. During only three decades, the United States issued more than one million entry visas to Haitians. Many were given to semiskilled workers who ostensibly wanted only to visit relatives already in the United States. However, many of these people overstayed their allotted time limits with the intention of gaining permanent residence status.

By the 1960’s, immigrants to the United States were coming not only from Haiti’s cities but also from its villages and small towns. After arriving, these immigrants tended not to venture far from where they first set foot in America. As a result, they congregated in South Florida, where large Haitian communities arose in Miami and other South Florida cities. As the numbers of French- and Creole-speaking Haitians increased, the welcoming attitudes of the U.S. government and the American public cooled. However, after Lyndon B. Johnson became president in 1963, he focused on domestic issues and the expanding Vietnam War and regarded Haitian immigration as little more than a minor annoyance.

The less welcoming attitude of Americans did not, however, reduce Haitian interest in coming to the United States. Poverty, political repression, and crime were making life in Haiti increasingly difficult. Impediments placed in the way of emigrants by both the Haitian and U.S. governments simply forced the emigrants to become more inventive. During the 1970’s, Haitians began trying to reach the United States on small, often unseaworthy boats, risking drowning at sea. During the 1980’s, the exodus of Haitians by boat was so great that many people were using almost any craft that would float to reach South Florida. The distance they had to travel was several times greater than that required by Cubans sailing small boats to Florida.

The Haitians using small boats to emigrate were generally from the poorest classes—those who could not afford airfares or government exit visas. Because they arrived in the United States with no kind of documentation that would allow them to enter legally, they tried to enter surreptitiously. Those who successfully entered the United States then had to live underground until they could legitimize their presence. The U.S. Immigration and Naturalization Service estimated that about 55,000 Haitian boat people safely reached the United States after 1980, but it also admitted as many as another 45,000 may have escaped detection. The number of would-be immigrants who perished at sea can only be conjectured. About 85 percent of the boat people settled in Miami.

Most of the Haitian immigrants who came during the 1980’s were related to Haitians already living in the United States when they arrived. These immigrants were generally literate with some job skills and were consequently able to contribute to their new communities. However, as the total number of these exotic black immigrants increased, a backlash against them developed in the United States. As with many earlier immigrant groups in America, the Haitians were accused of placing new burdens on America’s already overburdened welfare systems and of taking jobs from American citizens.

During 1981 alone, nearly 1,000 Haitian boat people arrived in South Florida every month. Some came indirectly, after first passing through the Bahamas. The U.S. government tried to reduce the flow of illegal immigrants through an agreement with the Haitian government that allowed it to interdict Haitian boats before they neared the Florida coast and return Haitian immigrants to Haiti. 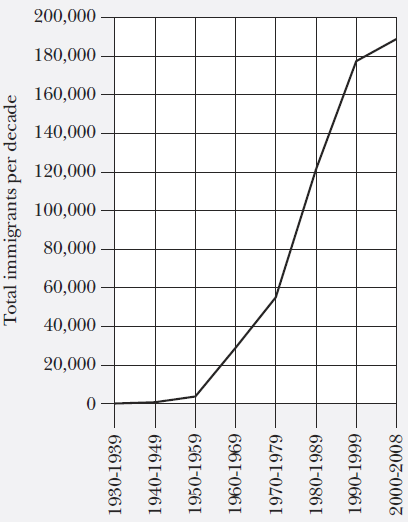 Haitians in the United States

Haitians are culturally distinct from other West Indians, most of whom speak Spanish or English. French is the official language of Haiti, but many rural Haitians speak only Haitian Creole, which isolates them linguistically. After Haitians settle in the United States, they tend not to identify with other nonwhite immigrant groups or even with African Americans.

Most Haitians are devout Christians, both Roman Catholics and Protestants, whose Christian religious rituals typically incorporate special island features. A large majority of recently arrived Haitians in South Florida attend weekly services at churches, which—like their island counterparts— play more than a spiritual role by helping the sick and the poor. Haitians have great respect for religion and members of the clergy. This respect was evident when Haiti made a former priest, Jean- Bertrand Aristide, its first democratically elected president in 1991, after the Duvaliers were ousted from power.

Black, non-English speaking, and culturally exotic, Haitian immigrants have experienced innumerable instances of prejudice and discrimination in the United States. Most are of African descent, so historically they faced the same discriminatory Jim Crow laws and racist attitudes as black Americans. However, even after strong civil rights laws and softening American attitudes toward racial minorities began making life in America more equitable for nonwhite peoples, Haitian faced new forms of discrimination. The slowness with which they have assimilated is doubtless partly due to their own reluctance to abandon Haitian customs and the insistence of many of them on continuing to speak Haitian Creole, at least among themselves. Their retention of voodoo rituals and other traditional religious and medical practices, as well as their frequent return visits to Haiti, have all helped brand them as “different.”

During the 1970’s and 1980’s, a new negative stereotype was attached to the Haitian immigrants: They were accused of being disease carriers. Initially, tuberculosis was said to be endemic among the Haitian population. An even worse condemnation came later, when Haitians were officially “identified” as acquired immunodeficiency syndrome (AIDS) carriers. This designation was later removed by the U.S. Centers for Disease Control and Prevention, but the U.S. Food and Drug Administration refused to accept blood donations from all persons of Haitian descent during the late 1980’s.

During the 1980’s, about 800,000 people of Haitian descent were living in the United States. They included naturalized citizens; legal immigrants; nonimmigrants, such as students, temporary workers, tourists, Haitian government personnel, and employees of international organizations; undocumented aliens; persons on transitional status; and refugees requesting political asylum. Those seeking refugee status came by the thousands during the four years of military rule in Haiti, from1991 to 1994, following the exile of “Baby Doc” Duvalier. The situation in Haiti being so horrendous, many were granted refugee status and resettled in areas all around the nation.

In 2004, nearly 450,000 foreign-born Haitians were living in the United States. Florida and New York were home to most, followed by Massachusetts, New Jersey, Connecticut, Maryland,Washington, D.C., Pennsylvania, Georgia, Illinois (particularly Chicago), and California. Miami, Florida, had an ethnic enclave called “Little Haiti.” New York City had Haitian enclaves in East Flatbush, Brooklyn, Elmont, and Long Island. Queens is also a favored location for those Haitians with the means to purchase single-family homes, the preferred type of residence. Boston also has a Haitian enclave.

In these and other areas, Haitians have set up many businesses that cater to the special needs of their fellow countrymen. Along with barbershops and car services, they operate restaurants specializing in Haitian cuisine. Haitians able to support themselves and their families in America tend not to forget their allegiance to their homeland and relatives they have left behind. They are estimated to remit as much as 600 million dollars a year to relatives in Haiti. These remittances have become an important part of the Haitian national economy.