Significance: Immigrants fromthe Chinese port city of Hong Kong have differed from earlier Chinese immigrants in a variety of distinctive ways. Their arrival in the United States has drastically transformed the nature of Chinese American communities.

Located along the South China coast, Hong Kong became a British colony during the mid-nineteenth century. During a century and a half of European colonial rule, Hong Kong culture became so different from that of the rest of China that the concept of a “HongKonger” identity arose during the 1970’s. During the early 1980’s, the People’s Republic of China determined to take Hong Kong back from Great Britain. As European imperialism was no longer popular throughout the world, Britain eventually agreed to restore Chinese sovereignty to Hong Kong in 1997. The prospect of China’s communist government assuming control of strongly capitalist Hong Kong triggered the emigration of between 500,000 and 750,000 residents of Hong Kong to other countries, including the United States.

During the 1980’s and the 1990’s, many of the people who emigrated from Hong Kong settled in the United States. In contrast to the peasants and contract laborers who had earlier immigrated from China to the United States, members of the late twentieth century wave of Hong Kong immigrants were primarily middle-class professionals and businesspeople, many of whom were very prosperous. More than 70 percent of the Hong Kong immigrants to the United States fell into the skilled worker and business immigrant categories. Moreover, 90 percent of them arrived in the United States already capable of conversing in English. Some observers have called these immigrants “yacht people,” a facetious term that distinguishes the prosperous Hong Kongers from the desperately poor Vietnamese boat people.

In contrast to professional immigrants from other countries who have used migration as a vehicle for upward mobility, many of Hong Kong’s immigrants have experienced loss of social status, reduced incomes, damage to their career development, and downward mobility in the United States. Hong Kong’s emigrants might be regarded as reluctant exiles because most of them have left their homeland for political reasons, not for economic gain. Fearing they would lose political freedoms, their prosperous lifestyles, and their physical assets after communist China took over Hong Kong, many Hong Kong emigrants were anxious to obtain passports of other countries before 1997, calculating that foreign citizenship would protect them from Hong Kong’s new communist regime. 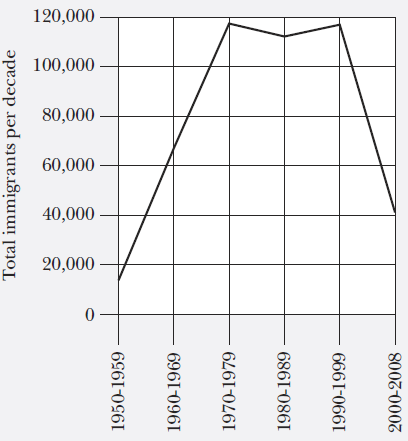 Another unusual characteristic of Hong Kong emigration was its speed. Large-scale migrations of professional people generally take place over long time spans. In contrast, Hong Kong’s middle-class migration was highly compressed. Its emigrants felt compelled to obtain foreign passports before 1997, figuring it would be too late for them to do so after the communist takeover in 1997. Consequently, the overwhelming bulk of Hong Kong immigrants to the United States arrived between the late 1980’s and the late 1990’s.

Another unusual characteristic of Hong Kong immigrants that set them apart from other professional immigrants was their attitude about remaining in the United States. Whereas middle-class professionals generally prefer to settle permanently after arriving in the United States, Hong Kong immigrants tended to have a “sojourner” mentality. Their paramount aim was to secure citizenship in other countries as a kind of political insurance for their futures in Hong Kong itself. With foreign passports, they could return to Hong Kong knowing that they could later leave at any time, should serious trouble arise under the coming communist government. Indeed, many Hong Kong immigrants returned to Hong Kong even before they applied for naturalization in other countries; these people sometimes stayed overseas only long enough to meet the minimal residence requirements required to secure their foreign passports.

A final characteristic of Hong Kong immigrants has been their strong sense of Hong Kong Chinese identity. They keep in touch with friends and relatives in Hong Kong and closely monitor political changes occurring there. The social lives of many Hong Kong Chinese in the United States are typically built around networks of friends who are also from Hong Kong. They speak Cantonese in their American homes, dine regularly in Chinese restaurants, regularly buy overseas editions of Hong Kong newspapers, and watch television programs on the Cantonese-language Jade Channel.

Because middle-class Hong Kong immigrants are resourceful, they like to purchase properties for investment and speculation. Their investments have triggered rapid rises in property values within both the old and new Chinatowns, as well as nearby neighborhoods. Some established white residents have complained that the intrusion of Chinese shops into their residential areas has changed the character of their neighborhoods.