Significance: Although most Hungarians who emigrated to the United States arrived between 1890 and the start of World War I in 1914, the most significant Hungarian immigration took place during the 1930’s. The spread of fascism and Nazism in Europe forced thousands of highly educated scientists, scholars, artists, and musicians to leave Hungary and Central Europe to find safe haven in America.

Although Hungarian presence in North America reaches back to 1583, when Stephen Parmenius of Buda reached American shores, the first significant Hungarian political immigration took place in the early 1850’s. Following the defeat of the Hungarian Revolution of 1848-1849, several thousand Hungarians found haven in the United States. Most of them came with the intention of returning to Europe to resume their struggle against the Austrian Empire, but a new war of liberation never materialized. However, many émigrés repatriated to Hungary after the Austro-Hungarian Compromise of 1867, which transformed the Austrian Empire into the dualistic state of Austria-Hungary. Before their repatriation, however, close to one thousand Hungarians—25 percent of all Hungarians then in the United States—had served in the Union Army during the CivilWar. Almost one hundred of them served as officers; among them were two major generals and five brigadier generals. Many other Hungarians never repatriated and instead joined the ranks of American professionals, businessmen, and diplomats. They were able to do so because over 90 percent of them came from the ranks of the upper nobility and the gentry, and were thus learned enough, with sufficient social and linguistic skills, to impress contemporary Americans.

The next significant wave of Hungarian immigrants were the turn-of-the-century “economic immigrants.” These were mostly peasants and unskilled workers who came in huge numbers, primarily as guest workers, to work in steel mills, coal mines, and factories. Of the nearly two million immigrants from Hungary during the four decades leading up to World War I, about 650,000 were true Hungarians, or Magyars. The remaining two-thirds were Ruysins, Slovaks, Romanians, Croats, Serbs, and Hungarian Germans. Of the 650,000 ethnic Magyars, close to 90 percent were peasants or unskilled workers who had recently emerged from the ranks of the peasantry. They were drawn to America by the work opportunities that did not exist at home. Even though Hungary itself was then being urbanized and industrialized, its development was not sufficient to employ all the peasants who were being displaced from the countryside. In the course of time, about 75 percent of these “guest workers”—two-thirds of whom were young men of marriageable age—transformed themselves into permanent immigrants. They established families in the United States and became the founders of Hungarian churches, fraternal associations, and scores of local, regional, and national newspapers geared to their educational levels. 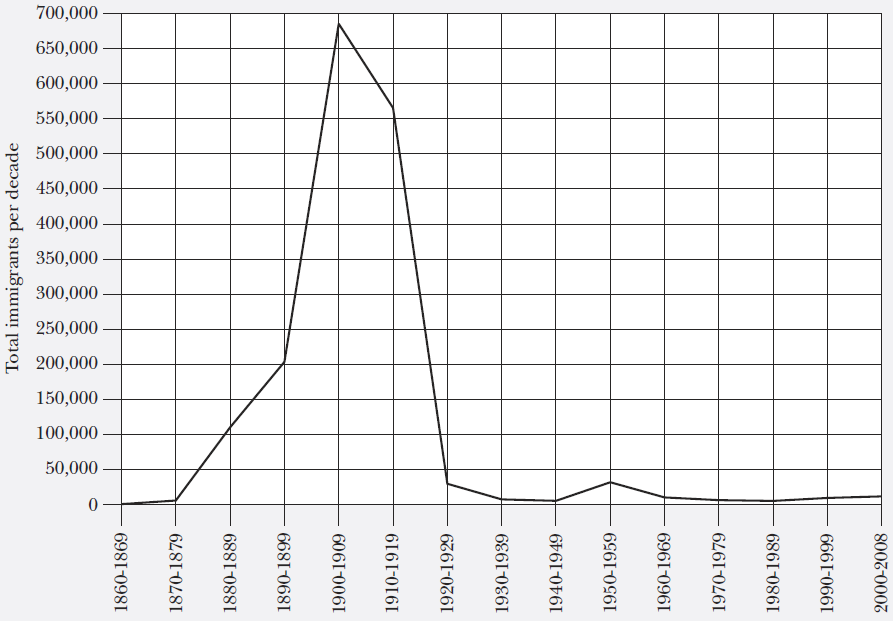 Source: Department of Homeland Security, Yearbook of Immigration Statistics, 2008. Figures include only immigrants who obtained legal permanent resident status. There are no data for specifically Hungarian immigration before 1860.

The mass European immigration that occurred during the four decades before the outbreak of World War I came to an end in 1914. Although it resumed at a slower pace after the war, the federal immigration quota laws of 1921, 1924, and 1927 put an end to this immigration, especially for those from southern and eastern Europe. This decline of immigration was furthered by the collapse of the stock market in 1929 and the resulting Great Depression. Consequently, fewer than thirty thousand Hungarians immigrated to the United States during the 1920’s.

The next wave of immigrants, known as the “Great Intellectual Immigration,” appeared during the 1930’s, in consequence of Adolf Hitler’s rise to power in Germany in 1933 and the resulting rapid increase of anti-Semitism and antiliberalism. Although only about fifteen thousand Hungarians immigrated during the 1930’s, this period brought thousands of highly educated scientists, writers, artists, composers, and other professionals to the United States. Ethnic Magyars constituted only a small segment of this Intellectual Immigration, but their impact was so great and widespread that many people began to wonder about the “mystery” of Hungarian intellectual talent. The impact of this immigration on the United States was felt through the rest of the twentieth century. Several Hungarian scientists played a major role in the development of the atomic bomb during World War II. Others, such as John von Neumann, were later in the forefront of the birth of the computer, and several became Nobel laureates.

The post-World War II period saw the coming of several smaller immigrant waves that may have brought as many as another 130,000 Hungarians to the United States. These immigrants included about 27,000 displaced persons who represented the cream of Hungary’s upper-middle-class society. Most of them left Hungary after the war for fear of the Soviet domination of their homeland. Postwar immigrants also included about 40,000 so-called Fifty-Sixers, or “Freedom Fighters,” who left Hungary after the suppression of the anti-Soviet and anticommunist Hungarian Revolution of 1956.

The next three decades saw a trickle of continuous immigration of about 60,000 immigrants who escaped from Eastern Europe. The collapse of communism and Soviet rule in 1989-1990 altered the situation. With the freedom to emigrate restored, and the attractive opportunities in the United States, many highly trained Hungarians came in quest of greater economic opportunities. One German scholar called these postcommunist immigrants “Prosperity Immigrants”—people who during the Soviet era had lost much of the idealism and ethical values of their predecessors. What most of them wanted was primarily economic success. While searching for affluence in the United States, they contributed their know-how to American society, which valued and rewarded them accordingly.

By the early twenty-first century, the immigrant churches, fraternals, newspapers, and other institutions of immigrant life were in the process of disappearing. Few of the new Hungarian immigrants have shown an inclination to support the traditional institutions that were important to their predecessors. Given this reality, and the unlikelihood that there would be another major immigration from Hungary, it seemed only a question of a few years before all of these institutions would vanish. According to the 2000 U.S. Census, 1.4 million Americans claimed full or primary Hungarian descent. Of these, 118,000 (8.4 percent) still used Hungarian as a language of communication within their families. By contrast, 1.8 million claimed Hungarian ancestry in 1980, and 180,000 were still speaking Hungarian at home).