Significance: Illinois has had an immigration history more complex than that of many states. Its early history was characterized by movements of Native Americans and influxes of people from other parts of the United States. During the nineteenth century, the state began drawing large numbers of European immigrants to its farmlands and cities, and the twentieth century brought in new waves of immigrants from Latin American countries and Africa.

Illinois’s early immigration history made it a microcosm of the north-south split within the United States as a whole. After the nation gained its independence, many southerners migrated to Illinois fromKentucky (which provided Abraham Lincoln’s family), Virginia, and Tennessee. The Blackhawk War of 1832 drove most of the few remaining Native Americans out of northern Illinois, and then new arrivals fromNew England and New York State began dominating Illinois’s commerce and politics. By 1860, the state was divided between those who approved of slavery and favored secession and those who favored abolition and preserving the Union. Illinois remained in the Union during the Civil War, but some of its southern counties remained sympathetic to the Confederacy. As late as the twenty-first century, northern and southern accents could still be observed around the state.

Illinois’s first great influx of foreign immigrants came after 1830 with the arrival of Germans, many of whom settled across the Mississippi River from St. Louis, Missouri. Mostly classically educated, these Germans were dubbed “Latin Farmers.” The aftermath of Europe’s many failed revolutions in 1848 brought another wave of German immigrants known as “Forty Eighters.”

During the second half of the nineteenth century Illinois’s population increased by more than 20 percent every decade. A large part of this increase was due to foreign immigrants, especially Germans and Irish, along with smaller numbers of Swedes and British. Germans settled throughout most of the upper Mississippi Valley, fromSt. Louis in the south to Wisconsin in the north, and they also settled in Chicago and other areas in the northern part of Illinois.

Irish immigrants tended to concentrate in Illinois’s cities and along the railroads and assimilated rapidly. Swedes tended to cluster in groups. In 1847, they founded a commune at Bishop Hill, near Galva. They also settled in towns such as Rock Island and Rockford, and many of them farmed. Rock Island’s Augustana College originated as a Swedish institution.

The population of Illinois’s largest city, Chicago, was more than half foreign born by 1860. Germans made up one-fifth of the total, followed by a slightly smaller number of Irish and even smaller numbers of Swedes. In 1870, Chicago’s population of just over 300,000 included more than 50,000 Germans and more than 40,000 Irish. By 1900, Swedes made up 9 percent of Chicago’s population. These groups were soon joined by a large influx of African Americans from southern states. 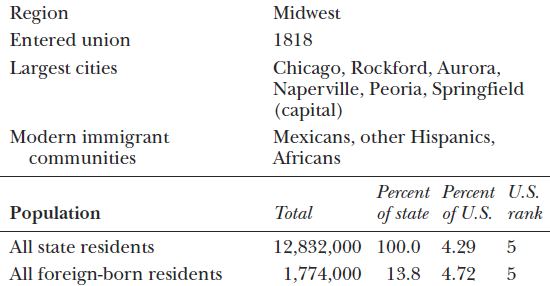 After 1920, immigrants to Illinois came from new sources, especially in Chicago. In 1900, 30,150 Italians were living in Chicago. By 1920, that figure had risen to 109,458. Poles had an established community along Chicago’s Milwaukee Avenue by 1900, and they numbered almost 140,000 by 1920. World War II brought refugees who helped swell Chicago’s Polish community, which fostered Polish-language newspapers, Polish-language Roman Catholic masses, and other Polish institutions, all of which were still strong into the early twenty-first century. World War II also brought a new wave of German refugees.

Mexican immigration into Illinois began just before 1920. Many of these immigrants were fleeing the violence of the Mexican Revolution, which started in 1910. At the same time, American entry into World War I drew many American workers away from Illinois’s farms and factories to serve in the armed forces and war-related industry. Mexican workers took many of their places in both agricultural fields and factories. Mexicans and other Hispanic immigrants concentrated in the Chicago area. Hispanic components of Chicago’s population were so important by the 1960’s that bilingual signs were appearing in city trains. By the 1990’s, some Chicago neighborhoods, such as Pilsen, were predominantly Spanish-speaking and were electing Hispanic representatives to the city council and the U.S. Congress. By the last decade of the twentieth century, Illinois meatpackers were facing such a shortage of workers that they were actively recruiting workers in Latin America and Africa.

By 2006, Illinois’s estimated population of 12,832,000 included 1,773,000 foreign-born residents. The state’s rich ethnic mix was reflected in its linguistic diversity. More than 10 percent of the state’s people spoke Spanish at home, and tens of thousands of families were speaking Polish, German, Tagalog, Italian, Chinese, Korean, French, Russian, or Greek in their homes.