Castle Garden was the first formal immigrant depot of the United States, operating from 1855 until 1892 at the southern tip of New York’s Manhattan Island. Built as a fort prior to the War of 1812, it soon became an entertainment center, most famous for hosting the Swedish singer Jenny Lind in 1850. In 1855, the New York State Board of Commissioners of Immigration converted it into a processing station for immigrants arriving at the city (see New York, New York).
Prior to 1855, immigrants arrived haphazardly at a variety of New York City docks. The chaotic scenes there, as bags were sorted and directions given in many languages, reflected the disorganized state of immigration policy. Only in 1847 was a state board of immigration established, hospitals and temporary quarters established on the city’s Ward’s Island, and an employment office established on Canal Street. Still, in 1849, the courts judged immigrants to be a type of “foreign commerce” and hence left their care to the Treasury Department. With neither a federal immigration bureaucracy nor an official national policy, local port officials kept few records, and those they did keep were often inaccurate. As hundreds of thousands of immigrants, largely from Ireland and Germany, poured into New York City every year after the mid-1840s, the state commissioners realized that a better system was needed for tracking immigrant entry, guarding against disease, and protecting newly arrived immigrants from exploitation.
After 1855, immigrants were ferried from their ships to Castle Garden, where immigration officers counted them and obtained information regarding age, religion, occupation, and value of personal property. Immigrants were required to bathe with soap and water. And though few ever received direct financial assistance, they were able to exchange money, purchase food at reasonable rates (kitchen facilities were provided), buy railroad tickets, and receive job advice, all relatively free from the influence of predatory “providers.” There was no formal housing there, but immigrants were provided with temporary shelter. During the Civil War (1861—65), Union recruiting officers met arrivals at Castle Garden, offering large bonuses and other incentives for joining the army. 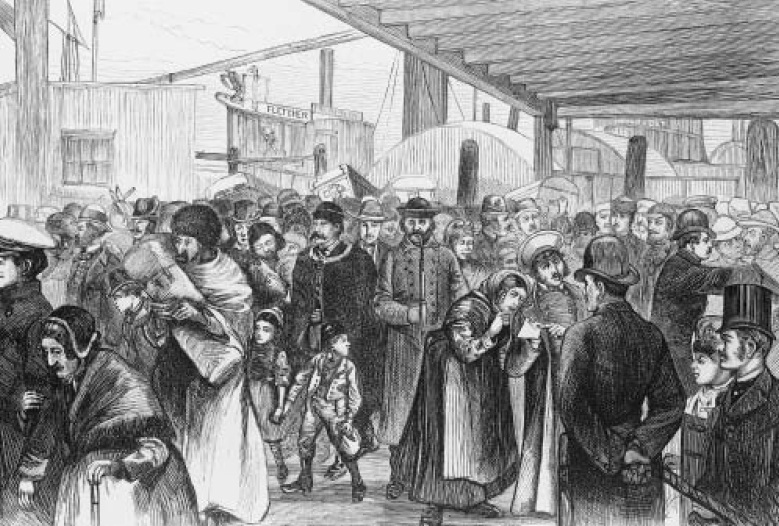 An illustration from Harper’sWeekly, May 29, 1880, depicts immigrants landing at Castle Garden, New York City. From 1855, Castle Garden served as the main immigration depot for the United States until Ellis Island was opened in 1892. (Library of Congress, Prints & Photographs Division)
As the volume of immigration increased dramatically in the 1870s, states receiving large numbers of immigrants petitioned the federal government for revision of immigration policies. State and local authorities had earlier levied a head tax on immigrants to provide services, but this had been declared unconstitutional in the Passenger Cases of 1849. An alternate system was devised putting more of the burden on transporters, allowing shipmasters to either post bonds or pay commutation fees for healthy passengers. This, too, the courts declared unconstitutional, in 1876, on the grounds it interfered with “foreign commerce,” an area reserved to congressional oversight. After years of appeals, New York State officials threatened to close Castle Garden unless the federal government agreed to fund its operations. As a result, in 1882 a head tax of 50¢ was assessed on every immigrant in order to meet the initial costs of reception. New federal guidelines in 1890 requiring more extensive physical and mental examinations, along with the massive influx of immigrants— almost 5 million coming through New York alone during the 1880s—led the federal government to establish a new immigrant depot at Ellis Island.