Significance: Because of Indiana’s history and geographical location, its population has a higher percentage of people who originated in the American South than any other midwestern state. Indeed, Indiana is politically, culturally, and linguistically the most “southern” midwestern state. In contrast, international immigration has had less of an impact in Indiana than in most other states. In 1880, only 7.8 percent of the state’s residents were foreign born, compared to 23.0 percent in Illinois and 14.0 percent in Ohio.

After the United States won its independence in 1783, most of what would become the state of Indiana was considered the property of Native Americans, as stipulated by the 1795 Treaty of Greenville. However, between 1800 and 1810, Indians made land cessions in the extreme southern part of Indiana and again in 1838, when the Potawatomi people were forcibly removed from the state, in defiance of earlier treaty provisions, and removed to Kansas. Their removal made desirable land available to Kentuckians and other southern American settlers before many international immigrants arrived.

The first substantial group of overseas immigrants to enter Indiana were Swiss, who settled in Switzerland County, along the Ohio River in the extreme southeast part of the state. Swiss surveyors arrived in 1796, and a colony was founded at Vevay in 1803. Vevay still held a Swiss wine festival as late as 2008.

Germans formed the largest immigrant group to come to Indiana before the late twentieth century, but they were not as numerous there as in many other states. Germans began a colony at New Harmony in 1814. However, they were gone by 1825, and their land was sold to Robert Owen and a group of British utopians. Political problems in Germany in 1848, together with the scarcity of agricultural land, led to the arrival of more Germans later. Many of these immigrants settled in the southeastern part of the state, near the Swiss. That part of the state was so heavily populated by German speakers that a traveler reported leaving a boat at Madison in 1846 and going north for almost eighty miles without hearing a word of English spoken. Germanimmigrants were most prominent in Indiana’s Ripley and Dubois Counties but were outnumbered by American southerners and Ohioans.

In later decades, Indiana’s German residents began moving toward the state’s cities. In 1850, Germans constituted 14 percent of the population of Indianapolis, where Germans became enough of a political force to make public school instruction in German optional. In Fort Wayne, skilled German workers were recruited for local industries. By the late nineteenth century, that city’s population was said to be 80 percent German. German organizations—Turners Clubs and singing societies— were still active in 2000 in Indiana.

Other Indianans of German extraction were not international immigrants. Long-established Amish communities maintained a separate existence and spoke the German dialect called Pennsylvania Dutch. According to the 2000 U.S. Census, that dialect was spoken at home by almost eight thousand Indiana residents. 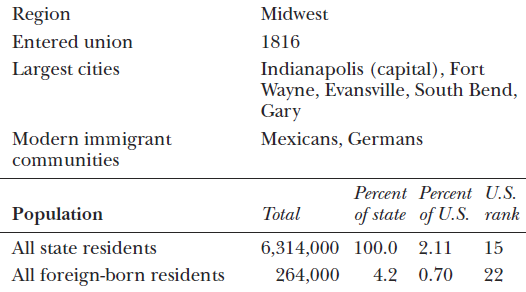 In 1960, only 2 percent of Indiana’s residents were foreign born, and most of these were Germans. However, the state’s immigrant mix began to change during the 1970’s. Failures in Mexico’s economy drove many Mexicans north in search of work, and some of these people found their way to Indiana. Although fewer Mexican immigrants came to Indiana than to other midwestern states, they brought a fundamental change to the state’s ethnic composition. By the year 2000, foreign-born residents constituted only 3 percent of Indiana’s nearly 6,100,000 residents. However, the 185,555 residents whose primary language at home was Spanish outnumbered German speakers by more than four to one.