Cesar Chavez became the most visible public spokesman for the rights of migrant farmworkers in the United States during the 1960s and 1970s and the first national symbol of the Mexican-American labor community. His work as a labor organizer led him to oppose consistently the agribusiness industry’s use of both legal and illegal labor from Mexico and thus brought him into conflict with other Hispanic leaders who criticized his lack of commitment to La Raza (the people).
Chavez’s father migrated with his family to Yuma, Arizona, from Chihuahua, Mexico, in 1888. With the depression came loss of the family store in 1934 and the family homestead in 1939, leading Chavez and the other members of his family to become permanent migrant laborers. Living in the San Jose barrio of Sal Si Puedes after two years in the U.S. Navy (1944–46), Chavez became interested in community work and the political philosophies of nonviolence. He worked with the Community Service Organization (CSO) throughout the 1950s, rising to the position of executive director (1958–62). In 1958, Chavez became directly involved in labor organization, leading a campaign in Oxnard, California, to oust braceros (Mexican laborers) who had been brought in to drive down labor wages (see Bracero Program). The campaign was initially successful, but Chavez realized that results would not be permanent without a labor union to see that agreements were kept. In 1962, he established the Farm Workers Association (FWA) but chose to maintain its independence from the AMERICAN FEDERATION OF LABOR–CONGRESS OF INDUSTRIAL ORGANIZATIONS (AFL-CIO) and its branch the Agricultural Workers Organizing Committee (AWOC), hoping to maintain the strong sense of community activism that had been part of the CSO.
Chavez emerged as a national figure in 1965 when he led the FWA into a Delano, California, grape workers’ strike that had been initiated by AWOC’s local director Larry Itilong on behalf of Filipino-American workers protesting the hiring of low-wage braceros. The Delano strike captured the attention of reformers of all classes and races, and many from around the United States volunteered to help. In 1966, Chavez led a much-publicized march from Delano to Sacramento in order to present the matter to Governor Pat Brown and continued to expand consumer boycotts. With an emphasis on nonviolence, community solidarity, and religious fervor, Chavez’s work resembled to many Americans the efforts of Martin Luther King, Jr., on behalf of African Americans. Later that year, under Chavez’s suggestion, the FWA took the name National Farm Workers Union (later changed to United Farm Workers of America [UFW]) and joined with AWOC in order to give farmworkers greater bargaining power. In July 1970, the grape strike finally ended, with workers earning substantial increases in pay and the union organization strengthened. 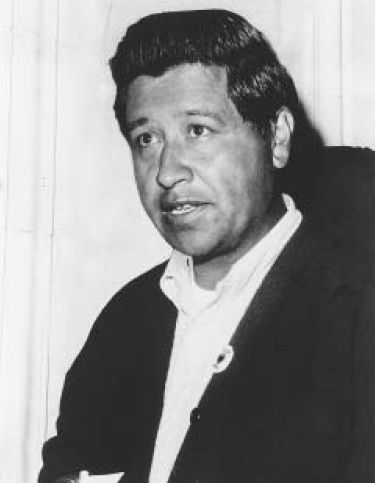 Cesar Chavez, photographed in 1966, was the first major organizer of legal Mexican and Mexican-American migrant farm laborers. His United Farm Workers of America waged a long and bitter but ultimately successful strike against grape growers in California (1966–70). (Library of Congress, Prints & Photographs Division)
Although the Delano grape strike was his most visible piece of labor activism, Chavez continued to organize strikes and to speak out against illegal immigration and its detrimental effect on wages. As the 1970s progressed, he was increasingly attacked by members of the Hispanic community who argued that his commitment to working-class issues worked against the greater good of Hispanics generally, including illegal Mexican immigrants who hoped to better their lives by coming to the United States. He nevertheless continued to work with the governments of both the United States and Mexico in order to secure protections for the interests of legal Mexican Americans in the United States. Chavez encouraged the U.S. government to include provisions in the Immigration Reform and Control Act (1986) applying sanctions against employers who knowingly hired illegal immigrants. In 1990, he signed an agreement with the Mexican government stipulating that Mexican citizens who were members of the UFW could also qualify for Mexican social security benefits.