For most of the 19th and 20th centuries, the city of Chicago was one of the most desirable destinations for immigrants. Emerging in the late 19th century as the hub of midwestern development, Chicago had good rail access from eastern ports of entry, and its slaughterhouses and industries provided jobs for unskilled workers. Large numbers of Germans, Irish, Swedes, Norwegians, Canadians, Czechs, Poles, Greeks, and Italians clustered there in the 19th and early 20th centuries. After World War II (1939–45), Bosnian Muslims, Latvians, Lithuanians, Pakistanis, Mexicans, and Hasidic Jews created significant enclaves in Chicago. According to the 2000 U.S. census, Chicago had the third largest Hispanic population in the United States (753,644, behind New York City and Los Angeles) and the seventh largest Asian population (125,974). Its foreign-born population was about 1.1 million.
Chicago began as a small military outpost established in 1816. By 1833, it was incorporated as a village with a population of more than 150. When the government forced a land settlement on the local Indian tribes, removing them west of the Mississippi River, the European population boomed. By 1848, a canal was completed linking Chicago to the Mississippi, and by 1856, it was the hub of 10 railroads. The city continued to grow during and after the Civil War (1861–65), becoming the leading grain, livestock, and lumber market in the world. In 1870, Chicago’s population of almost 300,000 was 17 percent German (52,316) and 13 percent Irish (40,000), with the percentage of foreign born rapidly rising. Unprepared for the rapid influx of inhabitants, the city was host to overcrowding, disease, and degraded living conditions.
In response to the plight of the immigrants, in 1889, Jane Addams opened the Hull-House settlement to provide assistance to the urban poor. The large pool of unskilled labor fueled the city’s economic development but also led to tensions. In May 1886, the deadly Haymarket bombing during a labor rally revived nativist fears of immigrant radicalism. By 1890, Chicago was second only to New York in population and a magnet for numerous immigrant groups. In 1900, Swedes comprised almost 9 percent of Chicago’s population (150,000), making it second only to Stockholm in Swedish population. By 1920, it was the largest Norwegian city in the world besides Oslo, and there was already a Polish population of 400,000. Between 1910 and 1920, at the peak of early 20th-century immigration, about threefourths of Chicago’s population was either first- or secondgeneration immigrant. 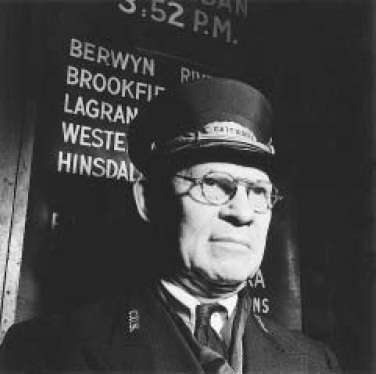 Charles Sawer, gateman at Union Station, Chicago, Illinois, 1943. In multiethnic Chicago, a man like Sawer was useful in the train station, where he served as an interpreter in Yiddish, Polish, German, Russian, Slovak, and Spanish. (Photo by Jack Delano/Library of Congress, Prints & Photographs Division)
After World War I (1914–18), most of the immigrant groups, including Czechs, Italians, Poles, and Greeks, began to disperse into new neighborhoods and eventually the suburbs, replaced by African Americans and other southerners moving north for industrial work. A Mexican community was well established by 1920, having moved north to work in steel mills and meatpacking plants. By the 1920s, the children and grandchildren of the “new immigrants” were developing a strong middle-class base (see new immigration). Together with economic ascendancy came greater opportunities for leadership and financial backing, both necessary to begin to influence the political process. A milestone was reached in 1930 when Anton J. Cermak, born in a mining town northwest of Prague, was elected mayor of Chicago. From that point forward, most of the old European immigrant groups rapidly assimilated into the mainstream of Chicago social and political life. Still, Chicago was a city of immigrants. In 1927, almost 30 percent of its population was born in Europe. The Jewish population alone, composed largely of poor eastern Europeans, was 275,000.
After World War II (1939–45), Chicago continued to attract immigrants. Historically a city populated mainly by Europeans and African Americans, it became one of the most ethnically diverse cities in the world. Mexicans continued to join the “colony” established after 1910, settling mainly in South Chicago. Apart from the largely assimilated Germans and Irish, Mexican Americans formed the largest ethnic group in Chicago by far, with a population of 1,132,147 in 2001 (in the greater Chicago-Gary- Kenosha area). Vietnamese, Laotians, and Cambodians fleeing in the aftermath of the Vietnam War (1964–75) and the Khmer repression came in large numbers during the late 1970s and early 1980s, congregating in the North Side neighborhood of Uptown. By 2000, there were about 25,000 Southeast Asians living in Chicago. Asian Indians were one of the most rapidly growing populations, settling mainly in western and northwestern suburbs. Indian Americans benefited greatly from provisions of the Immigration and Nationality Act of 1965, abolishing racial quotas and favoring skilled workers such as engineers and medical professionals. The act also gave preference to family reunification, which enabled Indians to bring their families to Chicago. Between 1980 and 2000, their numbers grew from about 32,000 to 123,000. There were also large populations of Puerto Ricans (161,655) and Chinese (78,277). In 1990–91, more than 5,000 Soviet Jews were relocated in Chicago, representing more than 9 percent of all Jewish émigrés to the United States. During the 1990s, Chicago was still the fourth most popular destination for immigrants, ranking behind New York City, Los Angeles, and Miami, Florida.