Irish immigrants: Immigration During and After the Great Wave

The Civil War was enormously destructive, but it also helped to stimulate the American economy and to push the United States toward more industrialization. As the nation entered the 1880’s, it entered into a remarkable period of economic expansion that transformed the United States into one of the world’s greatest industrial powers by the time of World War I (1914-1918). It also began a dramatic rise in immigration as part of this economic expansion. Sources of immigration also began to shift, from northern and western European countries to southern and eastern European countries.

During this great immigration wave, immigrants continued to arrive from Ireland in significant numbers, but these numbers never again reached their peak of the 1850’s. Irish migration actually began to decrease gradually around the turn of the twentieth century, even as overall numbers of immigrants to the United States were rapidly growing. As Irish immigration slowed, the Irish-born population of the United States gradually decreased from its maximum of about 1,870,000 people in 1880.

The heavy immigration of earlier years still meant that many locations in the United States had large Irish communities at the opening of the twentieth century. By 1900, the Irish-born population of the New York City metropolitan area had grown to an estimated 366,000 people. Another 650,000 residents of the New York area were children of Irish immigrants. Nearly 200,000 of the people in metropolitan Boston were from Ireland, and another 320,000 were children of Irish immigrants. In many cities across the United States, the existence of Irish American communities provided a basis for ethnically based politics and economic activity. The Kennedy family, which later produced America’s first Roman Catholic president in the person of John F. Kennedy, arose from the Irish community of Boston. 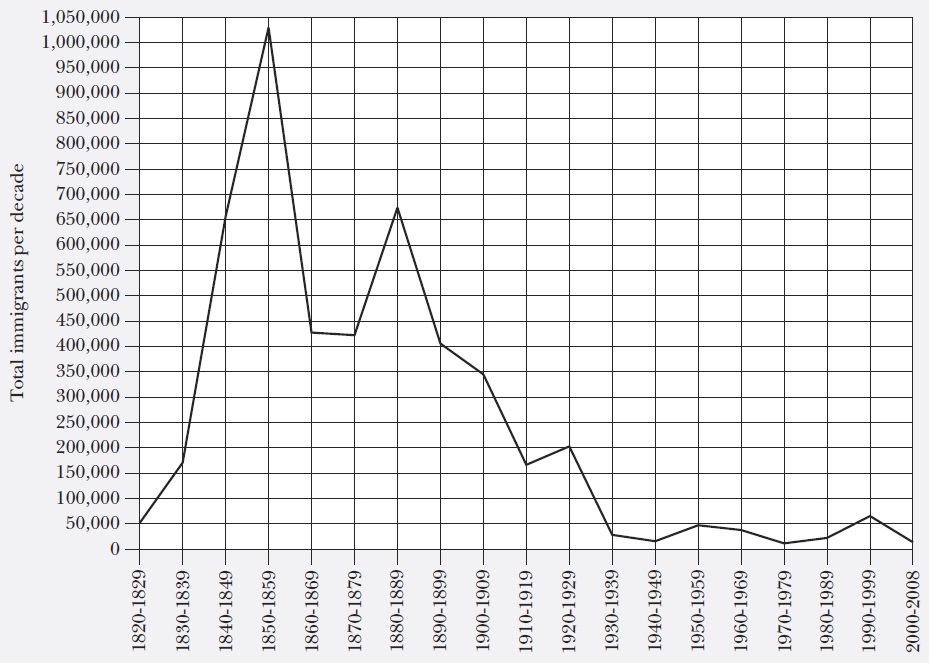 Between 1900 and 1909, only 4.2 percent of new immigrants came from Ireland, compared to 43 percent one-half century earlier. The proportion of foreign-born people living in the United States who were fromIreland dropped from44 percent in 1850 to 15.8 percent in 1900 and about 7.2 percent in 1920. In 1880, 10 percent of all Americans had at least one parent who had been born in Ireland. By 1910, this figure had dropped to 5.7 percent. Nevertheless, the latter figure meant that even as late as 1910, after decades of heavy southern and eastern European immigration, more than one of every twenty people in the United States was the child of an Irish immigrant. People from Ireland or with family links to Ireland still made up a substantial part of the American population in the early twentieth century.

The great wave of immigration came to an end when the United States adopted restrictive immigration policies during the 1920’s. Afterward, the overall number of immigrants decreased steadily until the late 1960’s. Irish immigration also dropped sharply, both in absolute numbers and as a percentage of all new arrivals.