Definition: Publications issued in both Japanese and English languages that cater primarily to Japanese immigrants and their descendants 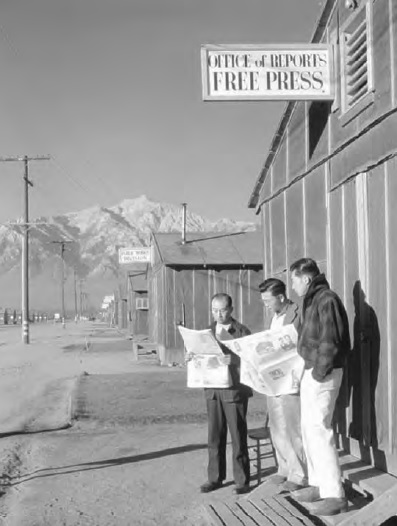 The golden era of the Japanese American ethnic press occurred during the 1920’s and 1930’s, when the ethnic populations in West Coast cities had grown large enough to support several competing newspapers. The Los Angeles Rafu Shimpo provided local and regional news to a large West Coast readership, while the competing but shorter-lived Doho gave emphasis to progressive, prolabor news and opinion. The San Francisco press included the Nichi Bei Shinbun and the Shin Sekai. Under publisher Kyutaro Abiko, Nichi Bei published both San Francisco and Los Angeles editions during the 1920’s. However, a labor strike closed the latter paper in 1931. Nichi Bei was the highest-circulation Japanese American newspaper. The East Coast press included New York City’s Japanese American News.

The Japanese-language papers also published articles in English, but not on a regular basis until 1925, in Nichi Bei. By this time, the publishers realized the need to cater to English-speaking Nisei. Other English-language sections soon appeared, followed by English-language weeklies, including Japanese American Weekly, introduced by Abiko in 1926, and the Seattle-based Japanese American Courier, introduced in 1928. Although the Courier achieved only a fraction of the circulation of the Japanese-language papers, its editor, James Yoshinori Sakamoto, exerted considerable influence and was instrumental in the development of the Japanese American Citizens League.

Several newspapers, especially Sakamoto’s Courier, fostered the attitude that an ethic of hard work and loyalty would lead to the eventual absorption of Japanese Americans into the mainstream of American life. The press was far from unified in reacting to the times, however. Whereas the Issei press heavily supported Japan in the Sino-Japanese War that began in July, 1937, Doho criticized Japan for creating havoc in Asia. Differences of opinion also split the Japanese-language and Englishlanguage staffs within individual newspapers.

The Japanese press suffered severely in the aftermath of the Japanese attack on Pearl Harbor on December 7, 1941. U.S. military officials desired total suppression of Japanese-language publishing, while civilian authorities merely urged its control. Nevertheless, all Japanese American papers on the West Coast were shut down by mid-May, 1942. In contrast, the inland press, including the Rocky Nippon, Colorado Times, Utah Nippo, and the relocated Pacific Citizen, continued and to some degree thrived during the war. Newspapers also quickly developed within internment camps.

Although officially sanctioned, internment camp newspapers enjoyed some autonomy. The Manzanar Free Press, for example, was headquartered in the Office of Official Reports and was subject to censorship by the camp director. In practice, however, the paper’s editors received little interference. The director even authorized a Japanese-language edition during the paper’s second year. While barred from directly criticizing federal policies that had led to the mass Japanese American incarceration, Free Press editors were allowed to print factual stories on legal challenges to those policies. The Free Press was circulated by mail to all the internment camps.

The Japanese American press was restored to vitality by the end of the war, with the new Nichi Bei Times established in 1946 to reconnect individuals separated by incarceration. As had the Nichi Bei Shinbun, the Times became the leading U.S. Japanese American newspaper.