Identification: Adherents of Judaism and their ethnic kin who derived from many different European nations, particularly those in eastern Europe

Significance: By the turn of the twenty-first century, about 5.1 million Jews were living in the United States, primarily in larger cities and their suburbs. Most Jews are considered part of the U.S. middle class, and do every type of work. A high percentage are business executives, professionals, or skilled workers, and many are in the fields of art, literature, and theater. Among Jews’ primary concerns are education and philanthropy.

Jews were present in what is now the United States as early as the colonial period of the seventeenth century. The earliest Jewish communities consisted of Sephardic Jews of Spanish and Portuguese ancestry, who had migrated to Brazil before moving on to North America in 1654 aboard a ship named Sainte Catherine. 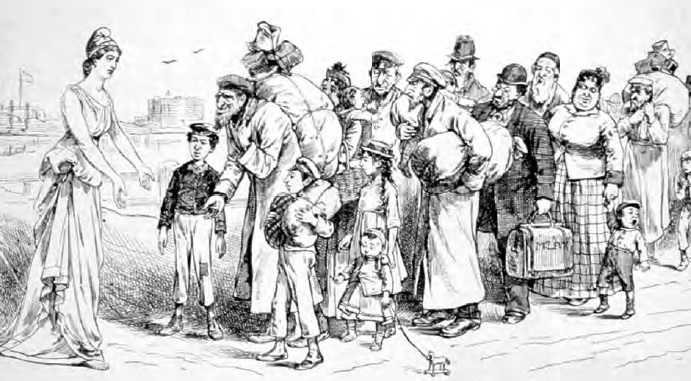 Early settlers in New Amsterdam confronted religious prejudice and discrimination by Governor Peter Stuyvesant, who did not wish them to remain. The Jews petitioned the Dutch West Indies Company, however, and were permitted to settle in the area. Governor Stuyvesant made life difficult for them by restricting their rights and exempting them frommilitary service. However, the Jews were not denied the opportunity to practice their religion in private. The first Jewish congregation in North America, Shearith Israel (Remnant of Israel) dates from April 26, 1655.

After Dutch-ruled New Amsterdam fell to the British and became New York City in 1664, Jewish religious services continued in homes until 1695, when the Jewish immigrants were given permission to build a synagogue. This was finally accomplished in 1728. English became the standard language of these immigrants, and until the early 1820’s Jewish immigrant religious practices reflected the Sephardic tradition, and Shearith Israel was regarded as the "mother synagogue.” Sephardic rituals were also adopted by Ashkenazi Jews from Germany and Poland.

Business was the occupation of the early Jewish settlers. Some were traders and craftsmen; others were wealthy merchants. Eventually, some of them were not satisfied to remain in New York and left for other colonies. Jewish settlements were established in Rhode Island, where Newport became the center of the country’s whale oil, candle, and soap industries. By the start of the American Revolution in 1775, Newport had become the most important center of Jewish life in the country. Of the approximately 1,500 Jews in the colonies at that time, the largest concentration—about 200—lived in Newport, where they established what would become the oldest surviving synagogue in the United States.

The lifestyles of colonial Jews generally mirrored those of their neighbors, except in their rituals and religious practices. Following kosher dietary laws, keeping proper Jewish homes, observing holidays, and educating children constituted significant challenges for Jews living outside the large cities. By the end of the eighteenth century, only about 3,000 Jews lived in the entire United States. More than half of them lived in the South. Georgia elected the country’s first Jewish governor, Daniel Emanuel. Jews were becoming assimilated into American society and were continuing to thrive, but through intermarriage with Christians and religious conversions, their numbers were actually declining.

With the Louisiana Purchase in 1803, the country’s boundaries expanded, and a number of Ashkenazi immigrants went westward. Jews helped to found St. Louis, Nashville, Detroit, and Cincinnati. Many of the Ashkenazi Jews who arrived during the early nineteenth century settled in the large cities of the East where they first landed, but some traveled inland to smaller cities such as Rochester, Pittsburgh, Chicago, and Cincinnati. Because they were generally poor and uneducated with little English-speaking ability, these immigrant tended to live close together in cities and ply trades that did not require special knowledge or education, such as garment-making and peddling.

Jewish immigration began increasing significant during the mid-nineteenth century, Between 1840 and 1860, the Jewish population of the United States rose to about 200,000, due in large part to an influx of immigrants from central Europe seeking refuge from the strife surrounding the failed revolutions of 1848, worsening economic conditions, and anti-Jewish legislation in many of the Germanspeaking states. These new immigrants were generally better educated and more financially secure than earlier Jewish immigrants, and brought with them higher culture, a tradition of charity, and reform Jewish practices to their new homes. Among these new immigrants were trained physicians who opened Jews Hospital (later known as Mount Sinai Hospital) in New York City, beginning a tradition of Jewish-sponsored hospitals in American cities. Founded to provide places in which Jewish physicians could work, these hospitals evolved into wellrespected community institutions for all members of society. Other Jews eventually became government officials in their communities, as well as industrialists and financiers. Many Jewish merchants became successful department store moguls.

By 1880, approximately 250,000 Jews were living in the United States. Many of them were highly educated and largely secular German Jews. Reformers among these immigrants became the foundation of the emerging reform Jewish movement in the United States. Rabbi Isaac Mayer Wise, who had been born in Bohemia in 1819, is credited with founding the reform movement, creating the Union of American Hebrew Congregations, and establishing the rabbinical school Hebrew Union College in Cincinnati, Ohio.

Other immigrants during that era came from the poor rural Jewish populations of Russia, Poland, Lithuania, and Ukraine, fleeing religious persecution in eastern Europe. The primarily Yiddishspeaking Ashkenazi Jews had little in common with the upper-class German Jews, who remained segregated in worship and business dealings. The Ashkenazi Jews founded their own Orthodox synagogues and tended to associate mainly with other members of their own community.

During the nineteenth century, most Russian Jews lived in confined areas as laborers and small merchants. Anti-Semitism, suspicion, and hatred were ever present, and deadly government-sponsored pogroms against Jews created a permanent atmosphere of fear among Russian Jews. The goal of the Russian government was to force one-third of all Russian Jews to leave Russia, another third to convert to Christianity, and the final third to starve to death. In response to this catastrophic government plan, Russian Jews flooded European port cities, from which they sailed to America.

After reaching the United States, many Russian Jews gravitated to New York City’s lower East Side, where newcomers sought out others from their Russian village and regions. Eventually, the lower East Side became a melting pot of Yiddish speakers. Similar developments occurred in smaller cities, such as Boston and Philadelphia. To aid new immigrants, Landsmanschaften, organizations based on geographic ties to home villages, assumed the role of extended family and provided health insurance, interest-free loans, and medical and burial assistance. Despite their difficulties in becoming assimilated into the new culture, the newly arrived Jews wrote letters to relatives and friends with glowing accounts of America, urging them to follow them there.

Between 1881 and 1890, 3.7 percent of all immigrants to the United States were Jews. By the first decade of the twentieth century, Jews constituted more than 10 percent of all immigrants, and by 1920, 23 percent of the world’s Jews lived in the United States. Two million Jews had arrived from eastern Europe alone by 1924. As distrust of immigrants grew afterWorldWar I, the Immigration Act of 1921 and the national origins quota system established by the Immigration Act of 1924 severely restricted immigration from southern and eastern Europe after that time.

Yiddish Culture and Its Demise

A dialect of German written in Hebrew characters, the Yiddish language united Jewish immigrants of all classes and backgrounds. Immigrants were comforted by its familiarity in the cities and the theater, in newspapers and vaudeville. Performers such as Groucho Marx, Jack Benny,Walter Winchell, George Jessel, and Molly Picon, among many others, had their start in vaudeville and went on to success in radio and television. More than twenty Yiddish newspapers, the best known of which was the Jewish Daily Forward, were published in New York City alone.

Because the borders of the United States were effectively closed to new Jewish immigrants, the earlier immigrants were becoming Americanized and assimilated more quickly. Consequently, Jewish ghettoes, the Yiddish press, and the Yiddish theater steadily declined. Growing anti-Semitism attacked Jews, their patriotism, and their character. During the 1920’s, some prestigious universities established quotas limiting the numbers of Jewish students they would admit. Jewish graduates also faced discrimination as they attempted to attend graduate and professional schools; some were forced to attend foreign medical schools or change their career goals. Some changed their names, hiding their Jewish backgrounds to gain admission to restricted institutions. Blatant discrimination in housing existed, as did discrimination in employment, private clubs, and private schools.

After Adolf Hitler became chancellor of Germany in 1933, he began to put anti-Semitic policies into effect and vowed to exterminate the entire Jewish race. Concentration camps were opened at Dachau, Buchenwald, and Sachsenhausen. The plight of the Jews in Germany grew steadily worse, and many European Jews were convinced that their only chance for survival was to emigrate to the United States. Restrictive U.S. immigration laws were in effect, however, and immigrants had to prove that they either had sufficient resources to sustain themselves in the United States or had families to support them.

Austrian Jews were also forced from their homes and sent to a camp called Mauthausen after Germany occupied Austria in 1938. On November 9- 10, 1938, Nazi troops destroyed Jewish homes and synagogues and brutally beat and murdered Jews during Kristallnacht (night of the broken glass). The event spurred U.S. president Franklin D. Roosevelt to ease immigration restrictions and permit more Jewish immigrants to enter the United States. Between 1938 and 1941, more than 100,000 European Jews immigrated to the United States.

After Poland fell to the Nazis in September 1939, Jews were forced to leave their homes and move into large cities. Many died from lack of food or proper housing; others were taken to the Auschwitz concentration camp, which opened in 1940. Nazi troops continued to march acrossWestern Europe, conquering many nations. In early 1942, Nazi officials met and discussed what they called the "Final Solution to the Jewish Question”— a genocide that had as its goal the total extermination of the Jews. Other concentration camps were erected in Poland in which guards used poisonous gas to execute inhabitants.

By the middle of 1942 confirmed reports came out of Poland about the mass executions of Jews by the Nazis. Jewish charitable organizations worked to aid and transport the Polish Jews; in 1944 the War Refugee Board bribed Nazi officials to release 200,000 from the concentration camps. A total of approximately 6 million Jews were slaughtered during the Holocaust.

New U.S. laws enacted after the war greatly increased the number of displaced persons permitted to enter the United States. Between 1946 and 1952, more than 80,000 Jews came to America. Assisted by the Hebrew Immigrant Aid society and the National Council of Jewish Women, the immigrants received temporary housing, food, clothing, medical care, and instruction in English. As laws outlawing discrimination in housing were passed during the 1950’s, Jews moved to urban suburbs, established new temples and synagogues, and started new religious schools and community centers. During the last two decades of the twentieth century and the first years of the twenty-first century, approximately 400,000 new Jewish immigrants came to the United States, many to seek educational opportunities.

Friedman, Saul A. No Haven for the Oppressed: United States Policy Toward Jewish Refugees, 1938-1945. Detroit: Wayne State University Press, 1973. Examination of anti-Semitic hostility toward Jews fleeing from the Holocaust during Germany’s Nazi era.