Identification: Novel by Upton Sinclair about an immigrant Lithuanian family in Chicago and the corrupt meatpacking industry

Significance: In preparation for the writing of The Jungle, Sinclair visited Chicago meatpacking plants disguised as a worker in order to experience at first hand the brutal working conditions and the contamination of the meat products for America’s dinner tables. Although his intention was to bring attention to the plight of exploited workers, public outcry focused on the unsanitary conditions of the meat industry and led to the passage of federal food-inspection laws. 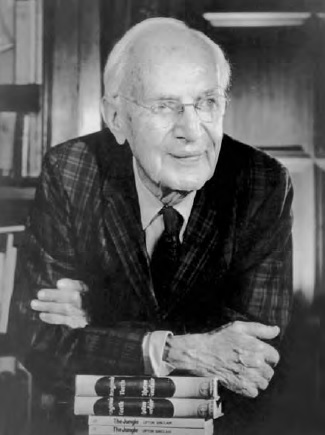 Upton Sinclair’s muckraking novel The Jungle offers a devastatingly bleak picture of the lives of Lithuanian immigrants lured from their homeland to the dark heart of America—Chicago and the meatpacking industry that destroys them physically and spiritually. From nineteenth century French naturalists such as Émile Zola, the socialist Sinclair borrowed the concept of the individual rendered powerless by immense natural and sociopolitical forces that reduce humans to animals caught in a trap.

The Jungle begins with the wedding reception of Jurgis Rudkus and Ona Lukoszaite, who postponed marrying to save for this expensive but cherished ritual in their culture. Soon the scene will seem a poignant reminder of lost happiness as the family is ground down by drudgery, deception, and death. Jurgis will witness the deaths of his father, Antanas, then Ona along with their second child, and eventually their toddler son, who drowns in a mud puddle. In addition to these losses, Jurgis comes to recognize the full dimensions of the jungle metaphor, or its variant, the slaughterhouse. The immigrants are lambs drawn to the slaughter by oppressive capitalism, exploiting them as "wageslaves,” fleecing them of their hard-earned wages and savings, then condemning them to death by starvation, accident, or disease, just as callously as the meatpackers butcher animals for meat.

Although a mediocre novel as a work of literature, The Jungle was a best seller that is still widely read in the twenty-first century, and it became a primary force behind the passage of the Pure Food and Drug Act of 1906, which led in turn to creation of the Food and Drug Administration.