Significance: As national security advisor and secretary of state under Presidents Richard M. Nixon and Gerald R. Ford, Kissinger helped shape American foreign policy during the latter half of the Vietnam War. 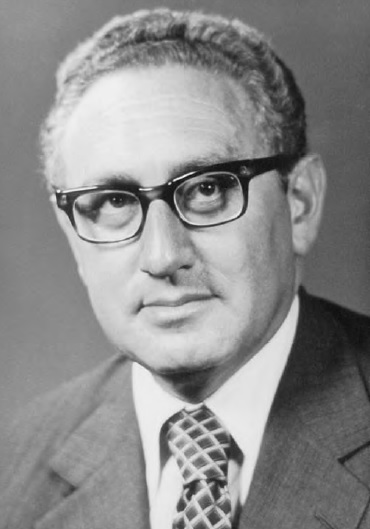 The son of a middle-class Bavarian Jewish family, Henry Kissinger fled to the United States with his family in 1938 after it became clear that Nazi Germany’s hostility toward Jews was no ordinary pogrom to be weathered. In the United States he changed his first name from Heinz to Henry and succeeded in school even while working long hours to help support his family. Drafted into the U.S. armed services in 1943, he worked as an interpreter during the Allied occupation of Germany, where he helped track down and prosecute former Gestapo agents. After the war ended in 1945, he returned to school and earned a doctoral degree in political science at Harvard University in 1954. He later joined the faculty of Harvard and went on to make his mark as an authority on international relations. The books he wrote in that field offered penetrating insights on American nuclear policy that attracted attention at very high levels.

In 1969, President Richard Nixon wooed Kissinger away from academia to accept an appointment as national security advisor. Nixon was so satisfied with Kissinger’s work that he elevated Kissinger to secretary of state, making him the nation’s top diplomat and the primary shaper of U.S. foreign policy. Although disliked by critics of the Vietnam war, Kissinger survived the Watergate scandal of the early 1970’s and remained at his posts under Gerald R. Ford. After Ford lost the presidential election of 1976, Kissinger retired from public service. He became an elder statesman, offering advice to Republican politicians and conservative think tanks.

Kissinger, Henry A. Ending the Vietnam War: A History of America’s Involvement in and Extrication from the Vietnam War. New York: Simon & Schuster, 2003.