Significance: During the nineteenth century, the United States experienced an influx of Roman Catholic immigrants from Europe. These immigrants differed from earlier European immigrants, most of whom had been Protestants. Religious differences between Protestant Americans and Roman Catholics created economic, social, and political strains as the United States became a more diversified country. The Know-Nothing movement emerged in opposition to Catholic immigration. 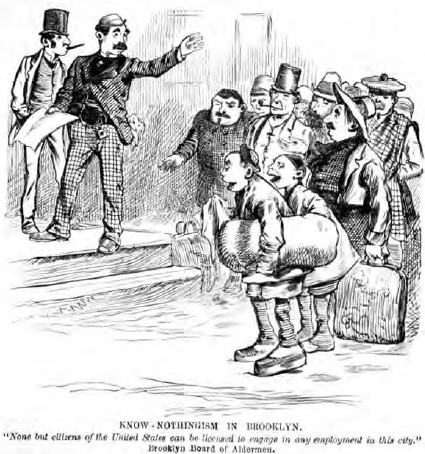 As more and more Catholics came to the United States, they settled in the cities of the North. These immigrants were generally unskilled workers who competed with working-class Protestants for low-wage jobs. Tensions between the two groups were compounded by the Panic of 1837, as jobs became scarce and the wages of the working class suffered. Also, as Catholics settled in the cities, disputes arose concerning public aid to parochial schools. At the same time, Catholic parents resisted paying taxes for public schools to which they were unwilling to send their children. Amid growing anti-Catholic sentiment, the Know-Nothing movement would emerge and capitalize on the decline of the major parties—the Whigs and the Democrats—during the 1850’s.

During the 1840’s, several nativist organizations were established in reaction to Catholic immigration. In 1852, these groups merged to form the National Council of the United States of North America, which later became known as the Know- Nothing Party. Members referred to the organization as the Supreme Order of the Star-Spangled Banner. Membership in the society was limited to native-born citizens who were twenty-one years of age or older; Protestant, born of Protestant parents, or raised under Protestant influence; and not married to a Catholic. The stated purpose of the organization was to protect American citizens in the legal and proper exercise of their civil and religious rights, to use legal methods to resist the Catholic Church and other foreign influences against American institutions, and to elect only nativeborn Protestant Americans to public office. The organization also advocated a twenty-one-year residency requirement for citizenship. It developed an elaborate ritual with signs, handshakes, and passwords, and members were required to maintain the secrecy of the group and its activities. When questioned about the organization, members would answer "I don’t know”—hence the byname. The group’s secrecy was eventually shed, however, as it rose to political prominence.

By 1855, the party had established state councils in approximately thirty-three states, and the movement claimed one million members. Initially, the organization secretly endorsed candidates from one of the major parties; however, by 1854 it had founded its own party and begun to nominate candidates. It held its first open national convention in New York City during that same year and officially abandoned its fraternal secrecy. The apex of the Know-Nothing Party was in 1854 and 1855. During this time, the party elected mayors in Boston, Chicago, and Philadelphia, as well as governors in Rhode Island, New Hampshire, Connecticut, Massachusetts, California, and Kentucky. In Massachusetts, the Know-Nothing Party received 63 percent of the vote and won every state senate seat and all but 3 of the 378 state house seats. In addition, Know-Nothing candidates were elected to all eleven Massachusetts seats to the House of Representatives. It was estimated that at least fifty-one members of the Thirty-fourth U.S. Congress were members of the Know-Nothing Party.

In February, 1856, delegates met in Philadelphia before the nominating convention of their rennamed national party, the American Party. However, members split over the issue of slavery, and delegates from Ohio, Pennsylvania, Illinois, Iowa, and the New England states walked out. The remaining delegates persuaded former President Millard Fillmore to be their party’s candidate for president. Fillmore, however, disavowed anti- Catholicism and transformed the American Party from a nativist organization to an anti-Democratic and prounion party. In the election of 1856, Fillmore received just over 20 percent of the vote and carried only one state, Maryland. Following the election, the American Party and the Know-Nothing movement quickly disappeared. While several enclaves remained in border states until 1860, anti- Catholicism was relegated to secondary importance as the issue of slavery became the major concern of the American people.

Bennett, David H. The Party of Fear: From Nativist Movements to the New Right in American History. Chapel Hill: University of North Carolina Press, 1988. Discusses the background to nativism and has several chapters on the Know-Nothing movement and party.

Richardson, Darcy G. Others: Third Party Politics From the Nation’s Founding to the Rise and Fall of the Greenback-Labor Party. New York: iUniverse, 2004. Includes information on the nativist movement and the emergence of the Know- Nothing Party.

Voss-Hubbard, Mark. Beyond Party: Culture of Antipartisanship in Northern Politics Before the Civil War. Baltimore: Johns Hopkins University Press, 2002. Includes an analysis of nativist culture as well as the Know-Nothing movement.