Significance: Founded in the American South by a Confederate general to suppress the freedoms of African American former slaves, the Ku Klux Klan disbanded after only five years but reemerged in 1915 as a secret fraternal organization dedicated to racial purity. Throughout its intermittent existence, it has been actively opposed to the immigration of nonwhite peoples. 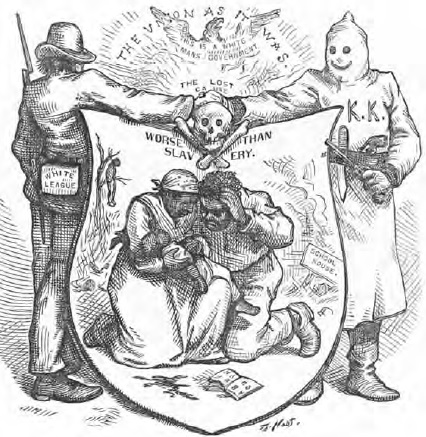 Months after the formation of the Ku Klux Klan in Tennessee, former Confederate general Nathan Bedford Forrest became the organization’s first "grand wizard.” During the Klan’s first brief incarnation, its southern Democrat members warred against the Reconstruction policy of the federal government. They particularly resented what they regarded as the policy of allowing citizens without substantial property assets to control the manner in which propertied citizens used their own possessions. Meanwhile, they terrorized newly freed African Americans, lynching them and burning their homes to discourage them from voting.

The original Klan had disappeared by the time Reconstruction ended during the 1870’s. However, it reappeared in Atlanta, Georgia, in 1915, and began directing its hate campaigns against new immigrants in the name of "Americanism.”

The Klan enjoyed its greatest popularity during the 1920’s, when many Americans were growing uneasy about the great surge in immigration from eastern and southern European countries. The Klan added its voice to others charging that Italian, Irish, and Polish Catholics; Russian and Slavic Jews; and Asians were threatening to destroy the white Anglo- Saxon Protestant base of the American population. Klan hate literature depicted Roman Catholics and Jews as threats to traditional religious American values and American racial purity. Klan literature found Asians particularly easy to stereotype and denigrate; like African Americans, Asians simply looked different.

Klan propaganda against these immigrant groups attracted millions of new members across the United States. However, the Klan’s membership was strongest in the South, from Florida to Texas, and in the Midwest, especially in Indiana.Members came from all strata of white male society.

The Klan’s program reflected the anti-immigrant feelings of many Americans during the 1920’s, the decade during which the federal government added restrictions to immigration from southern and eastern Europe to those already in force against Asian immigration. In 1924, the Klan helped elect eleven state governors and sixteen congressmen, and in 1928 it helped defeat the Roman Catholic presidential candidate Alfred E. Smith.

After again fading away during the 1930’s, the Klan made its third appearance in 1946 and remained active into the twenty-first century. In its most recent incarnation, the Klan has worked to improve its public image while continuing to campaign against immigration into the United States.